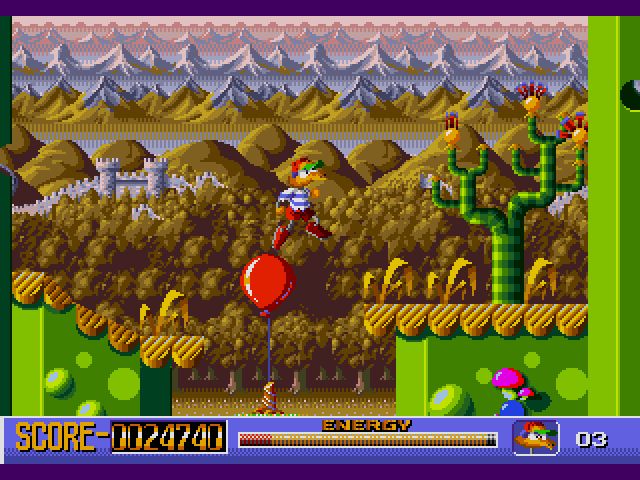 If imitation is the sincerest form of flattery then Mario should be blushing red as a beet at this point.  The success of Super Mario Brothers inspired the video game industry to spawn a sea of blatant clones.  Amongst the mascot platformer rush of the 90s Sonic the Hedgehog became the most popular due to its focus on being everything Mario is not.  So it stands to reason that he would get some clones of his own.  Bubsy, Awesome Possum, Rolo, they were all just a precursor to platform gaming’s greatest achievement: a duck with an electrical plug in his ass.  Yes folks, they were truly scraping the bottom of the barrel with this one.  Socket is a 100% Sonic clone in every sense of the word and nothing else but doesn’t completely succeed at that and as such is a flawed game.

There is a little backstory given to provide context to your actions, not that it is necessary.  The Time Dominator is traveling to various points in time to steal artifacts and wreaking havoc with the space/time continuum using his newly constructed time machine.  The Time Warp Patrol , who apparently are guardians of time, send Socket, a robotic duck to stop him.

Not you too Vic Tokai.  One by one nearly every third party in the industry decided they needed a mascot and it was a sad sight to see once proud stalwarts such as Sunsoft and Tradewest succumb to the mascot menace.  This is how the likes of Aero the Acrobat, Plok, and Rocky Rodent were unleashed upon our unsuspecting minds.  While Vic Tokai were never one of the 8-bit elite I enjoyed many of their releases such as Golgo-13, the Krion Conquest, and Clash at Demonhead, a nice hidden gem.  To see them fall in line with an only slightly above average platformer of their kind of hurt man.

Socket is pretty fast and can build up to a decent speed when given a straight path.  Unlike Sonic the Hedgehog your lone means of offense is a kick attack and is the first instance where the developers didn’t study Sega’s gameplay choices.  You can’t roll into a ball or pounce on enemy heads, meaning if there’s an enemy in your path (which is most of the time) you’ll end up taking the hit full on.  It’s a pretty stupid design decision to allow you to run (or get propelled) so fast

As an android Socket is powered by electricity and each level begins with him plugging himself into an electrical socket and charging up for the adventure ahead.  Your energy meter serves as both your time limit and life bar as it constantly ticks down.  Collecting the lightning bolts strewn about will refill the meter but does not grant an extra life as they are not counted.  Taking hits from enemies will remove a chunk of energy although the bar is generously long.  Technically there is no clock but since there are only a finite amount of lightning bolts any exploration has to be curtailed with this in mind.  The levels are pretty large in scope and it’s very easy to lose track of time and die due to no lightning bolts in the area.

Like the Original Sonic the Hedgehog each of the game’s seven acts are split up into three levels.  The first is a high speed area that serves as a transition to the next specific locale.  These levels are designed with minimal enemies present and (ideally) allow you to blaze through at top speed.  The second is the athletic area which focuses heavily on platforming in uniquely themed zones.  The final stage of each act is the labyrinth which changes the course design to a maze like series of areas that are hard to navigate and ends in a boss battle against the Time Dominator, who uses a different gimmick each time, the only exception being Act 6.  Does any of this sound familiar?

Thematically this could have been used to further differentiate the game from Sega’s classic however the developers opted to copy Sonic to the letter.  It’s like they compiled a list of elements present in Sonic installment and made it a point to include them somewhere in the game.  There are springs and bumpers that send you flying around the screen (literally sometimes), random drills and spikes poking out of the environment to slow you down, hell even the few power-ups in the game are gained by smashing orb like devices that might as well be TVs.  There’s even a mini game that tries to emulate the trippy bonus level of the original Sonic in terms of its psychedelic visuals but it instead interferes with navigation.

It’s as derivative as it gets but never quite reaches the same heights as the game it’s trying to emulate due to a lack of polish.  The game’s physics aren’t at the same level and it shows.  Building up speed to ascend an incline or loop requires more space than should be necessary; this is one area where curling up into a ball as Sonic increased your momentum at a natural pace and was pretty fun to see in motion.  Because the levels are so large it’s easy to become lost and waste precious time finding the correct path.  There are many dead ends and small platforms that are tough to land on and all the while your energy is winding down.  Once you reach the Time Dominator at the end of each act you have a finite window to beat him as there are no lightning bolts to collect.

It sounds challenging but the game is anything but.  The few enemies that populate each level don’t seem the slightest bit interested in your presence.  There are no bottomless pits to fall in but an abundance of spikes that are easy to avoid.  The Time Dominator is just as easy to fell as Dr. Robotnik since you can generally ignore whatever mechanic he’s wielding and zerg rush him.  Usually the only time you’ll die is when your energy runs out.

In terms of production values they’ve certainly nailed the look they were going for and the game definitely has its moments.  The backgrounds usually scroll four to five levels deep and the overall color palette is far more vivid than the average Genesis title.  There’s an insane amount of detail to all of the environments to the point where it is distracting and unfocused at times; they should have reigned it in at points.  The music is solid but the sound effects are ear gratingly bad.  When your energy is low you are treated to a pinging alarm that is worse than Zelda and only seems to get louder in intensity.  If the point was to make you seek out energy as soon as possible they succeeded but dear god my ears.

Socket is a game that aspired to be a Sonic the Hedgehog clone and nothing more but falls short of that lofty goal and suffers as a result.  Since it isn’t as good as the games that serve as its blueprint the question becomes why would you bother?  It isn’t an outright terrible game but could certainly have been better.