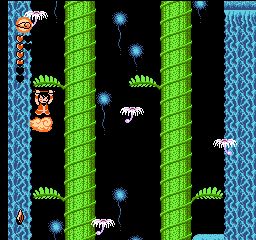 Whomp’Em huh?  I’m sure there is someone out there patting themselves on the back for that one.  “Clever” name aside Whomp’Em is one of many titles that were changed during the localization process to something that would be more recognizable to an American audience.  Sometimes these changes were for licensing reasons; the anime that Shatterhand was based on never saw a US release while Dragon Ball became Dragon Power since no one even knew what a Dragon Ball was (and wouldn’t for many more years).  Originally based on the legendary Journey to the West Whomp’Em’s original Chinese theme was ditched for a Native American one but that does little to hide its foreign roots.  Get past the silly box art and you are left with an excellent action game that takes a few cues from Mega Man to stand out from the crowd.

Originally released in Japan as Saiyūki World 2: Tenjōkai no Majin Whomp’Em seems to draw inspiration from a number of sources.  As its original story was based on the Journey to the West the protagonist was Son Goku, of which you can take your pick from any of the numerous incarnations of the character.  Though it bears a slight resemblance to Capcom’s arcade game Son Son it is closer in style to Mega Man, albeit with an Indian protagonist.  As Soaring Eagle you are on a quest to find the missing totems from your magic pouch; that’s it.  Technically you are also aiming to stop an ancient evil and save a princess as illustrated in the rare cut scenes but the game makes no mention of these anywhere.

Your primary weapon is an all-purpose spear that has a variety of functions on its own.  The spear has decent range and can be used to perform a downward and upward stab attack.  You can also hold it above your head to guard against debris and other objects.  You can even hold it out in front of you to bludgeon any idiot stupid enough to walk into it.

There are quite a few items to pick up, some defensive, and some offensive.  The most important are the gourds which function like the bullets in Bionic Commando.  Collect enough and your life bar is increased by another heart up to a max of 12.  Technically you only have one life however magic lanterns perform that function and you can carry three.  Little spearheads increase your next four attacks while the head dress will protect you from four hits.  The spear power-up is the most useful as it nearly doubles your attack length which is insane.

The Mega Man similarities show up in a few ways.  After a brief introductory level you have your choice of six levels that are considered “tests”.  You won’t find any cleverly named antagonists christened after the elements or other such nouns but there are bosses who will drop a totem that will grant you a new ability.  There isn’t necessarily an optimal order to complete the game like Mega Man although certain totems will make other levels easier to traverse.

The powers granted by the totems come in a few flavors and outside of one have unlimited use.  Most will upgrade the spear in different ways while others such as the magic cloud will allow you to fly for brief periods.  The spinning spearhead can block projectiles and destroy certain walls but is not an offensive tool.  Another will allow you to throw spears, weak offensively but mainly used to create platforms.  The fire wand will produce a brief stream of fire from the tip.  The two worst are the ice crystal and web.  The ice crystal can only freeze enemies in place at which point you have to switch to another weapon to finish them off. The web can only tangle up a small number of enemies in the game which makes it useless. The Death Breath is the only totem that will drain your life with each use but is worth it to shorten boss fights.

The totems are interesting and make the game fun when opportunities to put them to use crop up but for the most part are irrelevant to the rest of the game.  Because the levels had to be designed so that they could be completed regardless of what abilities you possess you can largely ignore them and still complete the game which isn’t that far-fetched since the default spear is so powerful.  It stands to reason that the fire wand is useful in the Ice Ritual but you won’t really have to use most of your arsenal until the overly long final level.

As a whole the game isn’t too hard even with a single life.  You’ll usually find at least one magic potion so even the more difficult bosses will go down since you continue the fight uninterrupted with potions.  There are unlimited continues anyway although it sucks that there aren’t checkpoints in the levels.  Despite beginning with only three hearts you can roam back and forth for gourds to increase that as much as you want, a process I recommend.  The final test sees a significant spike in difficulty due to several cheap elements such as toxic clouds to close together and a zero gravity segment that is infuriating.  It’s a fitting challenge although platforming veterans won’t have too much trouble with it.

Whomp’Em is a pretty great title that is underrated even to this day which is sad as it deserves better. It looks great and has excellent gameplay to match although the music can go die in a fire.  Fans of platformers or great 8-bit games in general should definitely check it out.