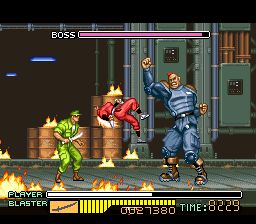 By late 1994 fighting games were about to undergo another renaissance due to 3-d technology.  Sega’s Virtua Fighter would pave the way and would soon be followed by Namco’s Tekken and a slew of others.  But while fighting games would increase in popularity again the beat em up was on the wane.  A few stand out titles would still trickle out such as Capcom’s Aliens vs. Predator and Streets of Rage 3 but the writing was on the wall.  Taito’s Ninja Warriors was released into this market and probably would have made a bigger impact a year or two earlier when the genre was at its peak.  That does not take away from the fact that it is an excellent update to an otherwise tepid arcade game.

In the future the entire United States lives under the totalitarian rule of a dictator named Banglar.  It’s only hope lies in an underground resistance group that has hastily built android ninjas more suited to the task of killing Banglar.

The Ninja Warriors was an arcade game released by Taito in 1988 and counts as one of my biggest gaming regrets.  Not because I didn’t play it but because I wasted my limited funds on it.  While some see it as a classic of the 80s honestly aside from the triple screen monitor setup it had nothing else going for it as it was too simplistic and repetitive.  The SNES sequel/remake actually keeps the same general framework but gives the gameplay a massive shot in the arm, making it one of the better brawlers for the system.

The arcade’s two protagonists return and are joined by a third android.  The Blue ninja is renamed…..Ninja and is physically the strongest but slowest.  Kunoichi is the most balanced of the three, eschewing the trope of the female being the fastest but weakest.  New to the series is Kamaitaichi, an android whose robotic exterior is fully exposed.  As the fastest of the group he uses his long arms to make up for his lack of strength.

There are stark differences between all three characters that will drastically alter how you approach the game.  The Ninja does not jump and instead performs a shoulder charge.  His dashing attack is instead a flying leg drop which covers less distance than the others.  His strength advantage is significant; enemies that can withstand multiple combos from the other two go down in two or three of his hits.   Kunoichi has the best crowd controlling throws and can spring board off enemy heads after landing a jump kick.  Kamaitaichi actually can’t grab opponents to perform throws and instead has a number of moves using his extendable arms and claws to keep them at bay.

There are far more fighting techniques available per character than in most brawlers and even when moves are performed in a similar manner the results are wildly different.  In addition to the multi-hit combo attack you have a variety of throws, a dash attack, an escape maneuver and can even block attacks.  The blaster meter constantly charges as long as you aren’t knocked down and once full you can use it as a screen clearing (most of the time) bomb.  However a small portion of it can be used to enhance your combos and attacks instead which is far more useful.  Expending the entire bar in one attack will usually clear the screen but you are then stuck waiting for it to refill completely when using only a sliver would have accomplished the same thing.

The game keeps the same single plane from the arcade which is in stark contrast with every other beat em up on the market.  It sounds limiting but actually places a heavier emphasis on crowd control since you can no longer circle around tougher opponents.  Most enemies will die in a single hit so they’ll usually attack in groups of 4-5 but interspersed in these groups are usually bigger robots and soldiers with projectiles.  It’s easy to lose control of the situation when dealer with the larger threat only to have the lame goons with the butter knives stab you five times in a row.  While the levels are a more or less straight line to the exit there are tons of background elements you can use to your advantage such as propeller blades and random bombing attacks that will also affect the enemies who will be more than happy to walk into them face first.

As a whole the game is only moderately challenging but does begin to pick up in its latter half.  Your generously long life bar means nothing considering there is usually only one energy pack per level.  The bosses especially are a pain in the ass since they will block your attacks more frequently and usually have a never ending supply of fodder enemies to deal with.  There are unlimited continues so it’s only a matter of time until you’ve conquered the game’s eight stages but its one hell of a ride until the very end.

Considering its origins as a less than stellar arcade game this update turned out better than expected while also following the style of its predecessor.  The Ninja Warriors is one of the best SNES beat em ups and a fine way to spend an afternoon.