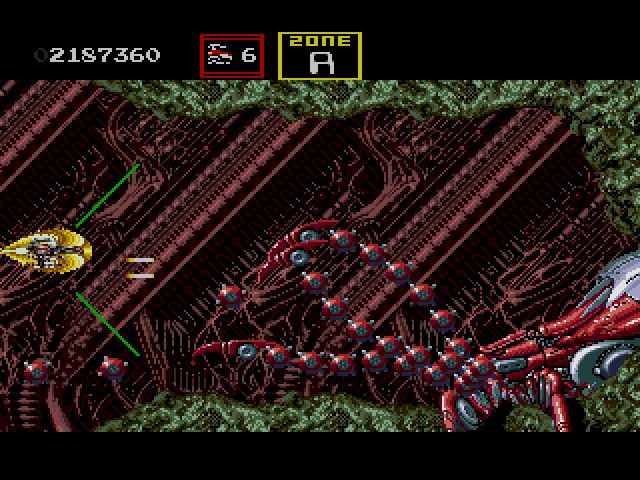 Anyone remember the deluxe arcade setups from back in the day?  There were numerous cabinets such as Konami’s G.I. Joe and X-Men that used a series of multiple monitors linked together to create massively multiplayer games.  In an age before HD existed this was probably as close as it got.  Darius made extensive use of this to present a massive playing field, at first to cover up the average gameplay but its sequel introduced a few new features that would go on to become staples of the series.  For all of its improvements however Sagaia (i.e. Darius II) still feels like just another shooter on a console buckling under the weight of them.

Obviously the home version is unable to replicate the wide screen format of the arcade however the Genesis game does an admirable job of aping its graphics.  There is a noticeable loss of color and detail and the enemies have shrunk in size but otherwise it’s all here.  That said Darius II was not an exceptionally pretty game as the overall color palette was a bit dark with many of the backdrops sharing similar elements and design.   While the levels in the branching paths might have completely new surroundings the same enemies and mid-level bosses are recycled heavily throughout the game.

Sagaia’s biggest innovation came in the form of its world map.  After the initial level you are presented with a map of 26 levels lettered A-Z arranged in seven rows.  At each row you are presented with branching paths until you reach the end.  Depending on the path you take certain branches are unavailable and best of all each and every level is completely different and not a simple palette swap.  In total each run through the game will take you through seven levels.  There are multiple endings and different final bosses for huge replay value, something the genre has always lacked.

From a weapons standpoint the game is disappointing.  The standard red, blue, and green shield crests that power up the standard shot, shield, and bombs make their return and are joined by two new additions.  The gold crest grants thin lasers that alter its firing course the more it is powered up and a rare rainbow crest that enhances everything.

And that’s it.  You are going to rely on the standard cannon for the most part as the lasers are more or less useless.  The angles the lasers cover are of little use in most cases and does not actually benefit you until it is closer to its highest level of power.  Increasing the size and power of the standard cannon is more pragmatic as it is the most reliable.  The lack of any other offensive weapons is a glaring flaw since the shooter genre almost lives and dies by its power-up system and what is available feels inadequate.

The pacing of the game is a bit uneven at times.  There are long pauses in the action where very few enemies spawn and at times it seems like all hell has broken loose.  It’s never as bad as something like Blaze On, where close to two minutes can pass without anything happening.  Part of this also depends on the route you’ve chosen as certain levels are far more chaotic than others.  I found the levels set in space to be more relaxed than some of the more technologically advanced planets.

Despite that the game’s challenge is medium.  Enemies spawn in groups and recognizable patterns; killing all of them grants score bonuses that will bring you a step closer to an extra life.  As I previously mentioned your choice of route will determine the level of opposition but even at its craziest the game is still manageable.  Like the Gradius series dying while fully powered-up is near soul crushing, especially considering how weak the standard shot is.  On the other hand power-ups appear on a regular basis and you respawn instantly rather than at a checkpoint.  The mid bosses and some of the larger ships you encounter seem almost indifferent to your presence and will actually fly off if you take too long destroying them.  This is in stark contrast to the end level bosses that are as vicious as they come.

This is a hard one to score.  On one hand I definitely have my grievances with the game but at the same time it’s still a solid game at its core.  There is a ton of replay value but the question is whether you will find the game interesting enough to want to see all of its content.