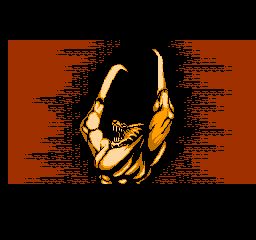 As a retro games site I spend a good portion of my time revisiting old games from my childhood and seeing how they’ve held up over time.  I can honestly say that when a game such as Contra or Secret of Mana is still just as awesome now as it was back then it’s a wonderful feeling.  And then there are the games that haven’t held up.  I remember Werewolf: the Last Warrior as a bad ass action game along the lines of Power Blade or Shatterhand but to tell you the truth I knew back then it had problems.  Maybe it was my Genesis envy at the fact I couldn’t play Altered Beast (which is hilarious in retrospect) but going back to it now has only made Werewolf’s flaws more evident.

I will give the game credit for not wasting time getting to the goods.  You start off in human form and immediately face off against a boss, an easy encounter that will acclimate you to your limited skillset.  Aside from a weak punch you also have a sonic scream that needs to be charged up first.  Once defeated you will change into Werewolf form and the true heart of the game begins.

Generally you move fast and can leap significantly higher than as a puny human.  As a werewolf your reach is extended thanks to your morphing hands which become long blades when attacking.  The blades are used for more than just bludgeoning as they can latch onto pipes, ropes, and other hanging fixtures to traverse terrain hand over hand and climb walls Ninja Gaiden style.  If in danger you can backflip almost endlessly which grants invulnerability when in motion.  For a last ditch effort you can charge up a suicidal bomb that also drains nearly half your life meter.

There aren’t many power-ups in the game but the few available are pretty crucial.  Hearts obviously restore health while bullets will allow you to let off a one-time projectile.  An hourglass will grant more time which is important since each level has a pretty strict time limit that never stops, even during boss fights.   Once you’ve collected five orbs you become a super werewolf who is faster, stronger, and can leap to heights that would make Low G Man jealous.

There’s a solid foundation for an excellent game here but in action the façade begins to crack and most of it stems from the game’s wonky collision detection.  One minute your attacks will land perfectly while other times you’ll watch as your bladed appendages pass through enemies or even the crates that contain items.  As difficult as the bosses are this added hassle only makes it worse.  You’ll also get sick of attaching to any minor surface and trying to climb it even if it’s only one box high.  There are many points in the game where it’s necessary to grab a pipe or ledge to cross a gap and initiating this move is sheer torture.  I’ve had to try close to ten times to grab a stupid rope meanwhile the clock is always ticking.

It’s obvious the game was designed around the werewolf and the game goes well out of its way to force you back into human form.  There are an obscene number of blue wolf icons that will instantly devolve you lying in boxes, many in spots where you’ll have no choice but to pick it up to proceed.   To be fair usually the next enemy (if there are any in the area) will drop a red one so you can change back but it isn’t out of the ordinary to be screwed in that regard.  Normally I’d say you can simply avoid searching for items but you need to, because the enemies aren’t generous with hearts and the clock ticks really fast.  The wolf is the only one that can crawl through tight spaces or back flip through electrical traps so if you for some reason are human (whether it’s due to items or losing half your life bar) there’s no choice but to commit suicide.  And of course continues are limited although you can find more.

The levels throw everything but the kitchen sink in your path and take the worst excesses of Castlevania and Ninja Gaiden to the extreme.  There are literally times where every step will see some boulder or bomb, hell even a combination of the two will drop from the sky.  Whenever there’s a pit to cross you can rest assured something will jump out to knock you to your death but here they take it a step further and will have two enemies waiting.  Certain levels such as the Waterfall will have so many enemies that spawn endlessly that even trying to make a bee line to the exit doesn’t quite work.  Comparatively the bosses have patterns that are easy enough to identify although I will say if you become a human just die, it’s not worth trying to beat them at that point.

Gameplay issues aside Werewolf does look pretty amazing by 8-bit standards.  Sprites are pretty large and well animated and the backgrounds, when there are any sport a high amount of detail.  The game’s comic book style bosses are the highlight although a few will remind you of enemies from other games.  The music is sadly an afterthought and not the game’s strong point.

How do you screw up a game about a werewolf with double bladed arms?  I don’t know but somehow the developers found a way.  Had the controls been tightened and the balance adjusted this would be a pretty solid title but as it is might be too frustrating for most to overlook its flaws.