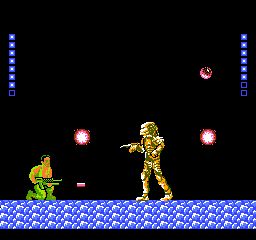 As much as I’ve had a good laugh publicly shaming the terrible licensed games of the past occasionally there is one that hits a little close to home and Predator is one of those titles.  Folks what I’m about to write hurts; Predator for the NES sucks.  I saw Predator in the theater in 1987 (having older brothers who will take a 7 year old to R-rated movies was awesome) and it blew my mind.  The premise of the movie was practically made for a Contra clone but what we got instead is anything but.  How the developers managed to go completely off the rails with some of the weird shit in this game I’ll never understand but one thing is clear: stay the hell away!

At the very least it follows the plot of the movie.  After Lt. Dutch Schaefer and his team of operatives rescue a member of the president’s cabinet from guerilla’s in South America the team is slaughtered one by one by an alien assailant until only Dutch is left take revenge.  Surprisingly this was not by Acclaim/LJN but is still just as terrible.

Don’t let the opening cutscene fool you however.  Once you start the game it bears little resemblance to any of the events in the movie aside from the occasional jungle.  Your pink jump suit clad Dutch begins every level sans weapons and has to rely on his meager fists until proper ordinance can be found.  It’s a terrible design decision for a number of reasons.  Nearly all enemies you’ll encounter are knee height and you can’t crouch and punch.  The first two levels will provide some form of weaponry immediately but after that in most cases you’ll go nearly half a level before gaining some means to properly defend yourself.

If the game had been designed with this in mind it wouldn’t be a big deal however the proliferation of enemies at every step says otherwise.  I’m sure the level designers thought they were being clever in forcing you to travel half way through a level to get the grenades needed to destroy the boulders blocking the laser which you’ll need to defeat the predator (who is also wearing pink long johns) in front of the exit.  But it fails in execution due to the terrible level design and busted controls.

This is a very platform intensive game, more so than most games of the 8-bit era and unfortunately the controls are not up to the task of navigating floating platforms.  Dutch seems to have way too much momentum behind him and will slide a little after performing any action.  Once you see the maze of inch wide platforms that comprise most of the levels you can see how this gets annoying fast.  Like every eight bit hero he also gets knocked back when touched; you’ll be revisiting the start of every level many times I can assure you.  I don’t know if it was intentional or by accident but you can also commit suicide by pressing any button while the game is paused; think about that for a second.

I’ve already mentioned how most levels seem to consist of an array of platforms arranged in different formations but I haven’t gone in depth at the creative license they’ve taken with the, uh, world it takes place in.  There seem to be only two different “themes” for the levels, ambiguous jungle and rocky caves.  The enemies consist of scorpions, butterflies, floating amoeba, rolling blobs, killer plants, and random demons with teeth that I can’t even name.  I realize a game with only one enemy, even if it’s a Predator, would get boring fast but holy shit this takes the cake.  They even have sentient rocks for god’s sake!

Speaking of the Predator you’ll encounter him many times during the course of the game although it’s never clear if it’s the same one or multiple different Predators.  Throughout the game’s 28 levels sometimes a Predator will guard the exit and is a pain in the ass to defeat.  The other encounters occur in the game’s six Big Mode (their words not mine) stages.  Here Arnold finally resembles the character from the movies as an oversized sprite.  The excitement around the graphical upgrade for these parts quickly fades as you realize you’re spending all of your time shooting bubbles before fighting a Predator with a different set of attacks each time.  Lame.

This is an exceptionally ugly game outside of Arnold’s pink pants with the same jungle and rocky cave schemes repeated over and over with the only changes being the color palette.  The Big levels are a slight improvement but lack backgrounds and suffer from flicker.  On the other hand the music is actually pretty good and catchy which is small consolation for the rest of the package.

This is a terrible, terrible game that should never have been made.  The Predator license deserved better than this and so I’ll simply pretend Contra was the game this should have been.