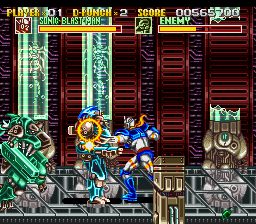 As much as I liked to peruse the selection of arcade titles on display at the mall in my youth there were still the deluxe cabinets that remained tantalizingly out of my grasp, be it due to lack of availability or because they were so expensive.  I remember seeing photos of the massive G-Loc cabinet that rotated to simulate the direction you were flying and the sit down version of Solvalou.  Usually these games were more expensive, to the tune of $1 and when you only have much in change Street Fighter is more appealing.

But they paled in comparison to Sonic Blast Man, which had a pad you punched to measure the strength of your hits.  I never got the chance to play it since it disappeared from arcades due to a lawsuit but years later the Fist of the North Star arcade game used a similar mechanic and I got my jollies from that.  Naturally they couldn’t port the game over to a home console as is so instead Taito made a side scrolling brawler that kept the cheesy premise and might have actually turned out even better for it.

There really isn’t much of a plot but what’s there is goofy as hell.  Sonic Blast Man is apparently a Hero of Justice (the game’s words, not mine) from another planet sent to protect Earth.  Mild mannered salary man by day, when evil strikes he morphs into Sonic Blast Man to save the day of which there is plenty of in this game.  The game’s intro tries to drive home this point but instead depicts Sonic Blast Man destroying an oncoming train with a 100 ton punch to save a woman tied to the tracks and completely glosses over the fact that he just killed hundreds to rescue one person.

Hokey premise and silly costume aside Sonic Blast Man’s powers make for an entertaining brawler.  As a superhero all of his attacks are accompanied by comic book style sound effects that really emphasize the impact of his hits.  Though it bears a strong resemblance to Final Fight in its initial level the rest of the game veers off into its own territory; not to say that its original but you have to admit it’s a bit strange to fight common thugs in a construction site and eventually fight aliens in outer space.

The game’s fighting engine places a large emphasis on grappling attacks and crow control.  By grabbing an enemy you have a variety of different attacks at your disposal; a flurry of punches that looks cool but is pretty weak and a one handed throw.  If you daze them first with a few hits a few more options open up; you can unleash a burning uppercut that also sends a trail of fire in its wake, a power punch that sends enemies flying, and a behind the back throw.  If you can dizzy you’re opponent you can grab them and perform an even stronger whirlwind throw.  If things get too hectic you can perform a special attack that will knock everyone on their ass but leave you dizzy for a few seconds.  The most powerful move is the Dynamite Punch, a 100 megaton punch that is limited in its use.

Although the game is only five levels long there’s a great deal of variety for the most part.  Each new level takes place in a different locale with new enemies to match.  Having to adjust your fighting tactics to new adversaries each level is fun although you’ll only fight those enemies alone for the entire stage.  It gets old fighting the same three mutant variations in the sewers or robots in space, especially as the levels tend to drag on.  It’s in these instances that the depth of the combat relieves a bit of the boredom.

A bit of the arcade game’s heritage still exists in the game in the form of its bonus rounds.  These five bonus stages are in fact exactly the same as the original arcade game except here you’ll build up power by rotating the d-pad to build up power.  You get three chances to destroy some manner of obstruction which escalates from a simple street punk terrorizing a woman on the street to eventually destroying a meteor in outer space.  They’re interesting diversions but the impact is lost since you aren’t physically punching a pad.

Graphically these are some of the largest sprites in side scrolling brawler from that period.  The sprites are so large in fact that you won’t see more than three enemies on screen at once.  The animation isn’t spectacular but is serviceable and the backgrounds are fairly simplistic aside from the odd Mode 7 effect here and there.  There is a bit of a trade off for those sprites though in the form of slowdown.  The slowdown is absolutely terrible in stages three and four and lasts almost the entire levels.  We’re talking early SNES level bad.

I had no expectations of Sonic Blast Man and came out pleasantly surprised.  With a few gameplay tweaks it could really have been something but as it is it’s a solid brawler on a console inundated with them and manages to stand out.