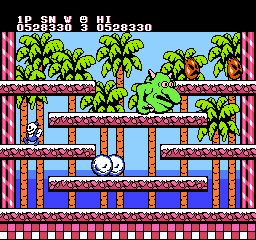 Any dedicated shooter fan probably knows the name Toaplan.  Even during the 8 and 16-bit when information about the developers of games wasn’t too common I noticed their name in the credits of many of the shmups I played such as Tiger Heli, Sky Shark, Hellfire, and the infamous Zero Wing.  But their output wasn’t completely relegated to flying ships and in 1990…..they completely ripped off Bubble Bobble.  Let’s not mince words, Snow Bros. is Bubble Bobble with a wintery theme.  However there are enough unique traits within the game to set it apart from Taito’s classic.  The NES port released by Capcom is an excellent rendition of its arcade big brother that is also hard to find for some reason.

The Evil King Scorch has his sights set on the kingdom of Whiteland and as such turns its two princes Nick and Tom into Snowmen.  Without the princes the princesses Teri and Tina are easily captured.  King Scorch would have been better off offing the princes since his magic has simply given them super powers, abilities they will now use to end his reign.

Replace the bubbles with snowballs and you have a good idea what to expect in Snow Bros.  The snowballs you throw will slightly cover enemies and stop them in their tracks for a few seconds; you need to completely freeze them to make a complete snowball.  At this point you have a few options.  Frozen enemies can be used as a platform to reach higher areas.  You can also push them around for a better vantage point but to completely defeat them you can kick them at which point they’ll go hurtling around the screen and smashing any enemies in its path.

Despite sharing a similar premise as Bubble Bobble the level design in Snow Bros. is what truly sets it apart.  While they are both single screen platformer the levels are smaller and more compact in order to force confrontations with enemies.  A single well timed snowball can completely clear the screen in seconds and there are many levels designed to facilitate this.  Rather than simple flat platforms there are far more sloped surfaces to build momentum and send rolling enemies to all corners of the screen.

Take too long on any given floor and the Pumpkin Head will come down to light a fire under your ass.  Although he is invincible he can be stunned for a second or two.  Pumpkin Head won’t aggressively follow you at first but if you dally too long he will spit out ghosts that will.  Different floors seem to have shorter time limits before he appears which leads me to believe they were designed to be cleared as fast as possible.

Clearing all enemies or multiples in one toss will grant many bonuses such as various kinds of food or other items such as dollar bills for points.  The most important items are potions that will enhance your abilities.  The red potion increases your movement speed, blue lets you trap enemies faster, and yellow increases your snow’s range.  The rare green potion will double your size and make you invincible for a short time.

There’s a large amount of variety among the enemies you’ll face and their tactics.  Some like the Blue Tornadoes can move through walls while Yetis breathe fire.  Many of them are just as agile and mobile as you are and will even try to avoid your attacks.  The game does a good of varying their appearances to keep things fresh and will introduce one or two new enemy types after every set of ten levels.

This is a shorter adventure than Bubble Bobble at only fifty floors however every tenth floor ends in a boss fight.  It’s a bit strange to fight massive bosses such as these considering the levels aren’t so spacious but it actually works.  The bosses can’t be directly damaged by your snow (aside from the final boss) and so you must rely on the adds they spawn to do so.  You might think this would be easy as they are large targets but it isn’t that simple.  The second boss randomly teleports between the top and bottom portions of the screen while the pair of birds waiting at the top of floor thirty are significantly faster than you are.  It’s a nice challenge and suitable book end for each group of floors.

The presentation is considerably better than in Bubble Bobble and in fact better than most single screen platformers.  Despite the frosty theme each set of ten floors has a particular theme to its background and tiles.  The game is exceptionally colorful by NES standards and the sprites are large and expressive.  The music is average however and did not leave an impression on me.

Snow Bros. could very easily have coasted on its Bubble Bobble inspired roots but instead uses its theme to rise above that.  This is a fun alternative that I would recommend to anyone unfortunately tracking down a copy at a reasonable price is a task in itself.