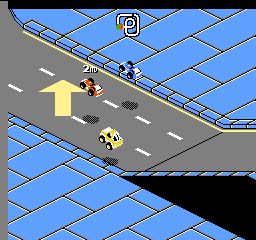 There were many late NES titles that went overlooked as the SNES took the spotlight, some of them classics, some technically brilliant but sorely lacking in gameplay.  The racing genre was not one of the most crowded in the NES library and so R.C. Pro Am stood out for its unique viewpoint and tight gameplay.  But a lot of its charm was also ruined by the rubber band AI.  R.C. Pro-Am II sought to correct its predecessor’s flaws and does so in many ways while at the same time leaves the most glaring one intact.  This is still an excellent title in spite of that but the game would truly have been incredible if the computer AI had been toned down.

Utilizing the same isometric perspective you compete in 24 races that now span more varied terrain for added visual variety.  The first eight are the standard stadium tracks and are followed by eight tracks in the city and concludes its final stretch in desert.  Rather than being awarded trophies you are given points and cash depending on position.  You still have to come in at least third place to move on which kind of sucks.  I’d have preferred the system used in Wave Race in which you need to meet the minimum number of points to qualify but it’s a small issue.

The money earned from placing in the top three and collected around each track is used to buy upgrades prior to each race.  New motors will boost your top speed while better tires increase the fidelity of your handling.  Unlike the first game the impact is definitely tangible especially in the case of gripping; the best tires will allow you to take corners with a level of finesse that borders on poetry in motion.

Missiles and oil slicks return and function the same however a number of new additions have been added to the list of weapons that have situational uses.  The new buckshot isn’t really an offensive weapons but will instead knock cash out of your opponents.  The freeze beam is handy to stop opponents in their tracks at the finish line and secure first place.  The laser is the lamest as it is simply a more powerful missile.  Probably the most crucial is Nitro which gives you a few second boost in speed which when combined with speed bumps can turn the outcome of a race in seconds.

There are tons of items littering each track that provide different benefits.  Stars will allow you to use your weapons more frequently, money bags provide extra cash, and there are random engine parts such as tires and motors that provide permanent boosts to your attributes.  Collecting the letters that spell Pro Am II (rather than Nintendo) will provide a new car that is sleeker and has better handling.  One change that I’m sure most won’t see coming is that your rivals can also collect these items too.  It’s possible that they can get a better car sooner than you at which point you’re screwed.  It’s a much better system (although frightening) than in the first game where your competition received the same upgraded vehicles you did, which made it pointless to upgrade.

The track design is far more adventurous this time out; whether that’s due to the years of experience working with the hardware or simply a willing to take risks doesn’t matter.  The previously flat and boring layouts of the first game are joined by massive hills, jumps, and other murky terrain.  The changes in elevation alone produce much more exciting moments on each track but the addition of new hazards like slippery ice and planes that perform strafing runs really bring it over the top so long as you aren’t on the receiving end.

As fun as the game can be, especially in multiplayer, the difficulty becomes borderline insane in the later stages of the game.  Even with a fully tricked out car and nitro it’s possible for the computer to leave you in the dust.  The rubber banding has been toned down somewhat but is still present.  It’s disheartening to see a rival car you just shot with a missile and left behind appear behind you within seconds.  It renders your upgrades a bit moot considering the AI can still keep up and surpass you with a lesser vehicle.  The most important moments during any race seem to come down to the final seconds and I can’t say that I found that engaging after a while.

The rubber banding doesn’t become an issue until the back half of the game but can be overcome with careful planning although in my opinion it shouldn’t have to come to that.  R.C. Pro AM II was sadly overlooked as it hit in December 1992 and as such is hard to find and expensive.  Unlike the first game it was never ported to any other console so you might have to eat the cost to experience one of the NES’s finer racers.