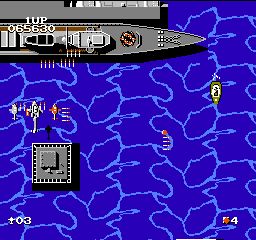 Micronics we meet again.  I’ll freely admit that I never liked Tiger Heli; I think it just comes down to finding helicopters lamer than sleek sci-fi jets.  I think my disdain for helicopters stems from Airwolf, an insipid show from the 80s that I could not stand.  Toaplan were the creators of many a classic arcade shooter such as Truxton and Zero Wing (classic for all the wrong reasons!) but Tiger Heli is not one of them.  In the arcade it was an average game but the home port is terrible, another Micronics hack job.  What little charm the game may have had is ruined by serious technical flaws.

The Tiger Heli in the title is the name of the chopper you pilot, supposedly the end result of billion dollar initiative.  The country of Cantun has been overrun by terrorists and so it’s decided to send in one lone helicopter to deal with the situation.  Which doesn’t sound as bad when you consider the entire country has almost zero air cavalry; pretty much every enemy you’ll encounter are in the form of tanks, ships, and turrets with the odd jet flying by once or twice.  You can see how one ship is all that is needed to end this supposed revolution now.

The first thing you’ll notice about the game is that it’s slow.  Tiger Heli seems to be running at a near single digit frame rate making your entire movement feel sluggish.  The game is also host to some of the worst flickering I’ve ever experienced in gaming; even when paused the sprites continue to flick.  Most of this stems from the constant explosions left in the wake of defeated enemies.  If you happen to drop a bomb and it takes out a few tanks gaze in astonishment as everything on screen literally disappears for a second or two.  This isn’t completely the hardware’s fault either, Zanac and the Guardian Legend have far more going on and the system keeps up just fine.  The one odd bit amongst the tapestry of bad programming is the near absence of slowdown.  This helps in dealing with the game’s slow pace since there are no speed power-ups to collect so the ship’s slow movement isn’t impaired.

Speaking of power-ups there are only a few in the game.  Bombs are in ready supply but aren’t the screen clearing variety.  They spray in a cluster of smaller explosions that are useless unless they are dropped within proximity of your intended target which defeats the purpose of having them.  In addition to the bombs you have two tanks attached to the side of the chopper which will explode and eliminate anyone in close range when hit.  It’s a nice bit of added protection.  You have a choice of two drone ships; a white one that fires straight ahead and a red that will cover your left or right side.  It’s possible to mix and match these depending on the situation although you won’t get much chance to experiment as they aren’t frequently available.

The drones should make you feel more powerful but actually do the exact opposite.  Unlike options in Gradius they are not invincible and can be destroyed.  You’ll spend inordinate amounts of time making sure they aren’t in the line of fire rather than raining down death from above leading to some cheap deaths.  They also constrict your movement range.  There seems to be an invisible box that limits your movements and once you have two drones it feels even smaller.

It sounds like a recipe for disaster but in all honesty aside from dealing with the constant flicker and slow pace the game is exceptionally easy and only lasts 15 minutes.  There are only four levels and the game awards extra lives quite often.  Once you’ve completed the fourth stage the game simply loops so you don’t even get the satisfaction of an ending.  Looping is intended for attaining high scores but I can’t imagine anyone would be interested in repeating the same boring 15 minute sequence over and over again let alone even once.

There are many shooters available for the NES that are worth your time and Tiger Heli is not one of them.  This wasn’t a good game back then and time has only made that more evident.