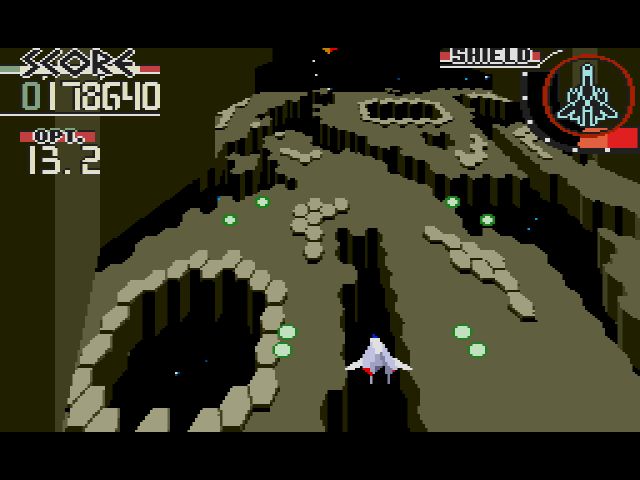 Star Fox offered a tantalizing glimpse of the future of gaming back in 1993 with its polygonal graphics enabled by the Super FX chip.  In a rare bit of aggressive marketing from Nintendo they even mocked Sega’s then slogan of “welcome to the next level.”  All eyes turned to Sega to see what their reaction would be and if they would try to counter Star Fox with a game of their won.  Silpheed garnered a lot of attention based on early press from Japanese magazines such as Famitsu, leading to a number of unfair comparisons to Star Fox.  While it doesn’t ultimately live up to that game’s quality it was a pretty good shooter in its own right. Really it’s only failing was being unable to live up to the unrealistic expectations the US press had built up surrounding its arrival.

A space terrorist named Zakalite has hacked into the mother computer of Earth, commandeering all of the planet’s weaponry.  Earth’s only hope of salvation lies in the hands of a small fleet of SA-77 Silpheed ships that happened to be outside of the computer’s sphere of influence as they make their way back to defeat Zakalite once and for all.

To say there was a tremendous amount of hype surrounding Silpheed is an understatement.  Many magazines of the day dedicated multi-page spreads to the game which was uncommon for Sega CD games at the time.  All of the hype stemmed from the game’s graphics which looked far beyond anything available for a home console, most importantly Star Fox.  No game could ever live up to the level of anticipation but at the end of the day Silpheed is one of the strongest shooters available for the Sega CD outside of its cool graphical tricks.

First the visuals.  While you might be fooled into thinking the Sega CD is shifting more polygons than some of the most advanced arcade units of the time it really isn’t.  The only 3d being rendered in real time are the occasional asteroids and the player and enemy ships. The backgrounds in the game are actually pre-rendered FMV footage with collision detection added giving off the illusion of interactivity.  Technically you could label it an FMV game but this is far from the typical tripe of the genre like Tomcat Alley or Sewer Shark.  The visuals have held up better than Star Fox as a result; since it isn’t rendering the visuals in real time the frame rate is higher and more stable.

This technique of mixing prerecorded footage with real time gameplay allows the game to show off some truly impressive sights.  Entire fleets of massive polygonal ships, planets and debris shift in and out of view without a hint of slowdown.  There are a ton of varying camera angles that frame the action giving way to some truly breathtaking sights.  Every level is unique and epic in scale; some levels feature battleships so large they wouldn’t look out of place in an episode of Robotech.  The only lacking element of the visuals would be the actual enemies you’ll face.  The enemy ships are tiny and simple in design and the bosses are simply larger versions of these enemies.

At the start of every level you are presented with a choice of weapons for the left and right wing of your ship as well as four different optional bombs.  New weapons are unlocked based on your score allowing you to mix and match weaponry on both sides of the ship.  The spread shot mixed with the homing laser is an odd combination but depending on the level can be highly effective.  It sucks that you aren’t given any intel on what you might face so if you choose an ill-fitting set you’re basically screwed.

Silpheed uses an odd oblique viewpoint that very few games have experimented with.  Off the top of my head I can only think of the Rayforce series.  This means that the camera is tilted at an angle with enemies streaming in from the top down to your level.  It takes some getting used to and brings its share of issues.  Dodging enemy fire isn’t as straightforward as you would think since the beams might typically come from an angle you can’t accurately judge.  While the streaming backgrounds are nice it can be hard to separate the debris you’ll have to dodge from the harmless video running in the background.  I will say that Game Arts did a fairly good job of reducing the color of these objects so that they stand out but in the middle of the chaos you’ll only have a few split seconds to judge.

This is a fairly challenging game, one that might take a few days to complete.  The twelve levels are of decent length and you’re only given a few lives plus a few continues to make it to the end.  Combine that with the issues stemming from the viewpoint and you’ll end up with a lot of cheap deaths.  I don’t want to make it sound as though you don’t have a fighting chance; the shields are highly resilient and replenishing items come at regular intervals.  Once your shield is gone further hits will disable your weapons, your engine and then finally lead to death so at least on that front the game is trying to give you a second wind.

Aside from the visuals the game has an excellent score matching the epic tone of the conflict perfectly.  There’s a ton of radio chatter as you play through each stage lending to the feel of a battalion of ships making their way through these environments.  Outside of the intro and ending there are only a few other cutscenes however all of it is fully voiced and competently at that.

In my opinion Silpheed is too different a shooter to compare to Star Fox although if you were to ask me which of the two is better I’d go with that game.  That doesn’t detract from Silpheed’s status as a excellent shooter that can be found dirt cheap.