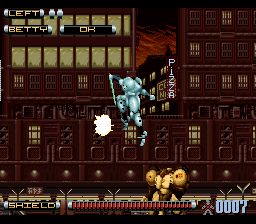 The Sharp X68000 was an interesting piece of hardware.  More powerful than most contemporary video game hardware at the time it was host to many pixel perfect arcade ports; while US gamers argued over whether the Genesis or SNES versions of Street Fighter 2 Turbo had more colors or better sound Sharp owners in Japan had the next best thing aside from the actual arcade boards.  Many an arcade classic was ported faithfully to the system such as After Burner, Final Fight, Street Fighter 2, Gradius 2, and many others.

Our only exposure to its software would come from the occasional port such as Lagoon (….yeah) and the subject of this review, Genocide 2.  G2’s US release was cancelled at the last minute but it makes little difference since the game was in English anyway.  While it sucks that we narrowly missed out on an official release the question is did we miss out on a hidden gem or an average brawler?

In the future humanity is in the process of recovering from a massive war with the help of the CONEX Mega Corporation.  However CONEX is not as benevolent as they seem and use mankind’s moment of weakness to make a bid for world domination.  As a hero of the last war it is up to you to pilot your massive Tracer mech and stop the corporation’s plans.

You would think stepping in the shoes of a ten foot tall robot would be pretty cool but in actuality the Tracer feels a bit gimpy.  Your main means of attack is your sword which has horribly short range.  The tracer is pretty agile and can jump pretty high and can perform a rather useless sideways flip.  In spite of that there’s very little platforming until late in the game, leaving the focus squarely on the action.

To make up for your sword’s lack of range you are equipped with a floating unit named Betty that is the basis of most of your secondary weapons.  When activated Betty can smash into enemies from eight directions and will remain active until the weapon meter drains, at which point it needs to recharge.  The only downside is that you’ll have to direct its actions which is a bit cumbersome.  Manipulating Betty’s actions with the d-pad will also cause you move as well and in most cases unless it’s a diagonal attack  in which case it will go over most enemies’ heads.  Considering you’re only using three of the face buttons dedicating at least one to Betty’s actions would definitely have improved its usefulness.

There are a few other weapons you’ll gain during the course of the game that will either enhance Betty’s functionality or increase your power in some way.  Mad Betty turns it into an aggressive heat seeking unit for a short period of time but you lose active control.  High Power boosts your attack power but to tell you the truth I never noticed any discernable difference.  Shield will protect you from damage for a limited amount of time and Explode unleashes an AOE attack within a limited radius.

The goal of each level is to destroy a set number of enemies in order to move on. Although you have primary targets there a ton of lesser enemies sandwiched in between to make things fun.  In most cases once the last target is destroyed the level ends but by the second half of the game you’ll need to make it to the exit to press onward or face a boss.  The enemies come in all shapes and sizes but it’s the rival mechs that pose the most challenge; considering these are almost always the targets you need to destroy it stands to reason they would put up a fight.

For the most part the levels are straightforward and offer little chance to explore side areas if there are any.  The few open ended areas encourage a bit of exploration however there are a few instances where the designers were too clever for their own good and you can possibly become stuck with no other choice but to reset the game.  Overall this is not an exceptionally challenging game although there is a significant spike in difficulty on the last level which borders on cheap.  You only have one life and limited continues and I can guarantee you’ll expend most of them on the final stages insane robot ninjas.

Aside from the boring level design the game’s collision and user interface have problems.  Because your attack range is so short you’ll have to practically kiss the enemies to hit them; there are many instances where your attacks will simply pass straight through them instead.  You gain no moment of invulnerability when hit so if an enemy is touching you your shields can be drained in moments.  That is if you can even tell how damaged you are.  The way the shield meter is designed the first row of damage is represented by half bars that are hard to see.  I also wouldn’t have placed it at the bottom of the screen; at first I thought Betty’s weapon meter was my life bar and the indicators of how many enemies are left to destroy were my extra lives.  Even if you’ve read the instruction manual it’s confusing to see in action.

As much as I wanted to really like Genocide 2 its flaws bring it down a few points.  There are some solid ideas buried under slip shod execution.  A little bit of gameplay refinement would have made this a solid game but as is it is strictly only above average.