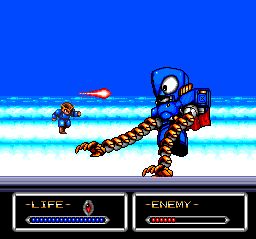 Owning the losing console during any console generation frankly sucks with the exception of the 16-bit era.  While momentum shifted back and forth between the SNES and Genesis both systems were still host to a horde of exclusive and multiplatform titles that made each worth owning.  If you were a Turbo Grafx-16 owner you were the odd man out.  Before acquiring both Nintendo and Sega’s platforms I was that guy and was forced to latch on to any substitute for the games I wasn’t getting.  I couldn’t have A Link to the Past so I got Neutopia.  Super Mario World was out of the question so Bonk’s Revenge had to suffice.  Mega Man X was the one that broke me and its stand in Shockman just didn’t cut it.

Shockman is actually the second game in a somewhat long running series called Shubibinmann and is the lone installment we would receive in the US.  The games were light hearted takes on a variety of TV staples in Japan such as Sentai and mecha and while not spectacular were at least solid, enjoyable titles.  Shockman stands out as the red headed step child of the bunch, completely dropping everything that sort of made it unique in favor of becoming a Mega Man clone minus the power stealing mechanic.  And it isn’t a good one either.

The game’s plot takes place years after the first installment.  Arnold and Sonya (the renamed protagonists) have moved on in life after the defeat of the Skull Force gang.  The Doctor who originally turned them into cyborgs has apparently lost his mind, sending the pair after imaginary aliens but his crackpot theories prove true finally when aliens led by Ryo come to take over the world along with his own Shockmen Jeeta and Mue.

Shubibinmann utilized a similar setup to Star Fox in that it had three set paths to take on the world map to reach the Skull Force Gang’s hideout although you could still go back to the other paths for power-ups and such.  The gold earned throughout the game was used to buy upgrades which made the game more fun to play and added depth.

You’ll find none of that here.  Instead of a sword the two protagonists now use a standard cannon that can be charged up like Mega Buster and that’s it.  You can at least fire upwards but that isn’t necessary for the most part.  There are no extra weapons aside from the bits that increase your attack power which is lame.  Aside from the bits there are two kinds of batteries; red, which refills your life gauge and black which extends it.

It’s a minimalist set up that you can reasonably assume has little depth and you would be right.  The game’s mechanics aren’t all that interesting to begin with although I will say that the jumping controls are a vast improvement over the first game however the level design is as bog standard as they come.  When on foot the levels are short with very few enemies that you are probably better off running past.  The two-player coop does spruce things up a bit as both players can combine their charge attacks with timing to produce devastating results.  But you also have to deal with the fact that both players share one life bar.

As you progress the levels become longer and tedious but I will admit that it starts to pick up in its latter half.  The contraptions get weirder and some of the platform is actually creative and challenging.  The game’s boss battles are also one of it’s few highlights.  The game shows a wonderful bit of invention when it comes to its major figures and their attacks and patterns give a glimpse of what the game could have been if it had a little more soul.

Next to its boss fights the three shooting levels are actually the game’s strongest.  Fast paced, with decent enemy placement and obstacles that require some expert piloting skills donning the controls of first a submarine and then a plane might seem out of place but the rest of the game is so damn strange (and derivative) that you’ll simply go along with it.

Graphically the game’s presentation is a mixed bag.  The sprites are really small outside of the bosses and the first half of the game is flat and plain looking.  The late portions of the game ups the ante with multiple layers of parallax and some large bosses to contend with.  The music does not rise to the same standard and is forgettable and the sound effects are weak and lack punch.

I wanted to like Shockman; the Turbo library is overrun with shooters and severely lacking in decent action platformers.  Shockman could have filled that void but instead simply reminds you of the better games you should be playing.