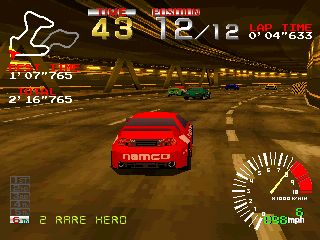 When Sony announced their entry into the home console market many were skeptical due to their less than stellar track record as a third party publisher.  With no notable intellectual properties under their belt the question became who would supply them with the killer app they needed to be taken seriously by consumers.  Battle Arena Toshinden for all of its faults was one but Ridge Racer more so than any game proved that Sony meant business.  For its time the port was near flawless and showed off the PlayStation’s polygon crunching prowess.  As a game its light on content but is still fun even to this day.

Comparing Virtua Fighter and Daytona to Tekken and Ridge Racer shows a distinct split in philosophy that might also partly explain why each respective series was more popular in certain regions.  Where Virtua Fighter and Daytona were more technical in their recreation of the sport Namco took a more arcade approach, lending their games a more relaxed pick up and play atmosphere.

It’s no wonder then that they saw more success in America than Sega, plus it doesn’t hurt that their conversions were handled far better than Sega’s rushed efforts.  The differences in quality between Daytona and Ridge Racer sort of highlighted the gap in technical capability between the Saturn and PlayStation.  You’ll find no massive pop-up or dips in frame rate here, just an excellent conversion of a popular arcade title that gave Sony the ammunition they needed to entice gamers into buying their now legendary hardware.

Hands down the graphics in Ridge Racer were simply phenomenal.  The resolution of the textures is lower than in the arcade resulting in a slightly pixelated look but still manages to nail the look of the coin op.  There is some minor loss of detail and pop in around particular turns that only the most ardent fans will notice. That’s because the rest of us will enjoy the game’s smooth handling thanks to the rock solid 30 fps.  For its time this was the best racing game money could buy for a home console and spit in the face of Daytona and its massive clipping.

This Ridge Racer occupies a strange middle ground between simulation and total arcade racing hijinks.  The choice between automatic and manual transmission enables the game to cater to fans of either type; I’m an automatic guy myself.  The differences in performance in each of the initial four selectable cars isn’t as pronounced as their stats would suggest with the Yellow Solvalou being the extreme outlier with its terrible tire traction.  As this was one of the first PlayStation releases it doesn’t support the dual shock controller.  I’ll freely admit going back to d-pad control in a racing game is definitely a regression but not the game’s fault.

The main criticism that Ridge Racer has always had to deal with is its dearth of content and it’s a valid point.  There is no Grand Prix or other organize single player mode.  You have your choice of beginner, mid-level and high-level “tracks” from the menu but in actuality the game only has one track.  The only addition to the mid-level course is a higher top speed, an additional lap and more aggressive opponents. The high-level track adds a new section to the last 30% but is otherwise the same.  I’ve made mention in the past of how racing games during the sixth generation usually only featured three tracks and four or five cars but this is even less than that and cost $50 at the time.

There are some unlockables and a few cool bonus features but they don’t make up for the game’s lacking proposition value.  While the game is loading you can play a brief game of Galaga (a feature so cool Namco trademarked it!) and if you can shoot down all the aliens you are given eight more cars to play with.  Placing first in all three courses as well as time trial mode and you get the option of mirror mode which reverses each track.  I’ve never been a big fan of this and find the novelty quickly wears off.  It’s never been a good substitute for completely new courses with new art and dynamics to learn.

Namco is to be commended for producing a sterling conversion of one of the highest end arcade games of the time for only a fraction of the cost.  In doing so however it does highlight the fact that most arcade games are designed for quick pick-up sessions and not lasting appeal, something that Ridge Racer definitely suffers from.  Eventually Namco would load their future arcade ports with tons of additional content but Ridge Racer was released too early to receive such star treatment.  It’s still a solid title even after almost 20 years but has been eclipsed by more feature rich efforts.