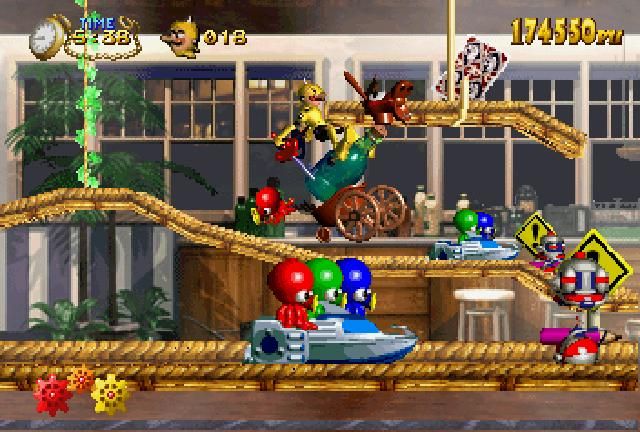 The original Clockwork Knight was an above average platformer that offered new 32-bit owners a tantalizing glimpse at what the new platforms of the time had to offer with its insane rendered graphics mixed with polygonal elements.  It may not have lived up to its potential due to shallow gameplay but was still fun in short bursts.  It was an ambitious title; so ambitious in fact that it had to be split into two parts.  One would expect Clockwork Knight 2 to follow in its predecessor’s footsteps but it actually offers many improvements that make the game a more well-rounded experience.

With Chelsea rescued all should be well but unfortunately she refuses to wake up after her capture.  Even worse an unknown assailant has kidnapped her again, meaning you’ll once again have to explore the confines of the house to save the princess once again.

Pepperouchau has the same core abilities as last time so those familiar with the first game can jump right in.  As the original Keyblade wielder he can attack with his sword, pick up and carry items, and push and pull objects.  His jump is still a flailing mess and can be hard to time because of his lack of momentum however there aren’t too many instances where platforming is a life and death matter.

Like its predecessor the game is broken down into another set of four rooms with two sub stages and a boss battle to cap it off.  Though it shares the same premise Clockwork Knight 2 does far more with its gameplay accoutrements, fulfilling the promise the first game had.  The level of interactivity in each stage has been significantly increased with far more items to toy around with.  Books reveal enemies or platforms, toys in the distant background launch attacks in you direction, and other static objects spring to life to either help or hinder your progress.  Each room in the house feels alive in a way that the first game never achieved.

At times there are dual planes like Guardian Heroes and you’ll need to switch back and forth constantly to reach the end of each level.  The more complex level design is a welcome addition as the base mechanics are so simple.  The game gives you more opportunities to use your abilities with far more blocks and books to push and pull to reveal optional paths and items.  Using your key to wind up toy boxes or other activate gears plays a larger role in the proceedings this time out aside from its extra damaging function.  You’ll have to utilize all of these tools to find hidden items such as the added cards which gives you a secret code to hidden option screen once all 32 are collected.  Good luck on that, they are well hidden.

In addition to the improved level design there are a few levels that finally allow you to slap a saddle on your trusty steed Barobaro for some auto scrolling action.  The “horse’ if you can call it that might look silly but these stages are anything but, filled with some of the game’s best moments.  As you navigate a toy race track, dodging falling pins and destroyed rails at every turn you’ll realize this is what the original should have been.  Or how about octopi on sail boats trying to assault you from behind while toy sharks try to take a chunk out of your ass through broken segments of track?

Overall the game is about the same length as the original which means experienced gamers will finish it in a few hours at most.  Thought it has its moments this is not a challenging title.  Sega seemed to be aware of this and as such have grafted a wealth of additional content, most of which offer even more rewards for completion.  Bosses galore turns the game into a Treasure style boss rush featuring every end level boss from both games.  Earning a master ranking unlocks some pretty fun minigames that are definitely worth the trouble.  Movie mode lets you watch all of the game’s FMV cutscenes as well as a few extras.  The quality of the video isn’t the greatest but it’s an excellent feature; as prevalent as FMV was during that generation you’d think more games would have provided such a feature.

The same basic engine is being used however Clockwork Knight 2 is a far more interesting title to look at thanks to a sharper resolution and better art direction.  The rooms you’ll visit this time out are far more varied, from the toy laden kid’s room, the steamy bath to the darkly lit and more serious study.  Even after all these years the way the game uses its polygons to build each environment and how it rotates as you move from section to section is amazing to see in action.  The bosses as well are better designed; no more ugly low resolution rendered sprites here.

This is a better title in every category that counts and a platformer worthy of being a part of the 32-bit era.  It has its slight flaws but those are outweighed by the sheer fun and variety the game has on offer.