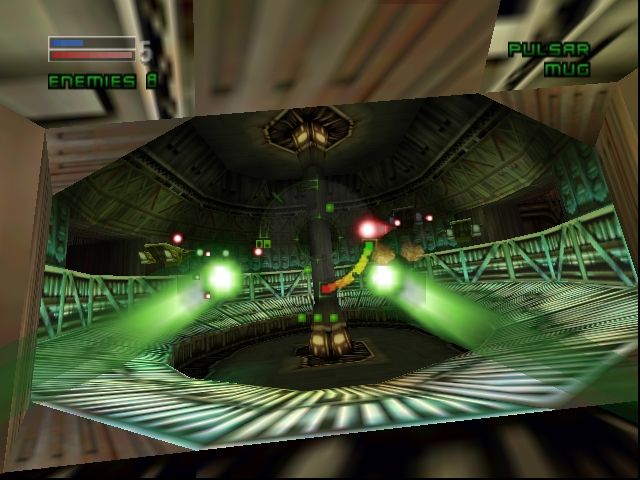 Back in the day before the average computer became affordable to the poor masses I could only sit and dream about how cool games like Doom, Command and Conquer, and Descent were like.  Eventually I would get to play some of these titles and they were everything I expected and more (Diablo, so damn good).  Yet Descent was the one that constantly eluded me.  It finally saw a PlayStation port in 1996 which should have been cause for celebration…..but I never bought it.  Something, something, Resident Evil, Suikoden, etc.  I would eventually get my fix with games like Forsaken, which came from Acclaim during the years where they finally realized they really shouldn’t crap out 40 games a year.  Forsaken is Descent in everything but name which matters very little as it is an excellent alternative.

In the distant future technology has expanded at a rate so fast mankind can barely keep up.  An atomic experiment goes awry and triggers a fusion reaction resulting in the destruction of Earth’s surface.  Years after leaving the planet the Theocracy decrees Earth a condemned waste with whatever remains free to salvage, sparking mercenaries from across the galaxy into an intergalactic gold rush.

Even today Forsaken still feels unique.  Don’t let the game’s first person viewpoint fool you; this is not your typical FPS.  Since you are piloting a hoverbike you have complete 360 degrees of freedom to move in every direction.  It’s disorienting to experience at first but after a few minutes most will be acclimated to the game’s sensibilities.  The unorthodox control scheme also helps with navigation; rather than using the d-pad or analog stick for movement they instead are used to look around with A & B used for acceleration/reverse.  It works surprisingly well and becomes second nature in short order while at the same time making use of the extra buttons on the N64 controller.

There are a host of weapons to find in every level divided into primary and secondary categories.  The main pulsar cannon never runs out of ammo and can be upgraded into the suss gun, which is basically a machine gun, the trojax, a powerful burst that explodes on impact and can be charged, the transpule, which rebounds off walls, or the beam laser, the most powerful beam that can overheat if used to frequently.  Secondary weapons are variations of missiles and bombs with a variety of effects such as heat seeking, gravity distortion, and even making enemies drop items.  Some of these work better in multiplayer than in the campaign of course but the variety is appreciated.

The game’s levels are a mass of corridors, tunnels, and hallways full of items and danger at every turn as you press switches, defeat enemies, and fulfill mission objectives.  Passageways can be literally anywhere, on the floor, the walls and even the ceiling.  It’s easy to fall back on your preconceived ideas of first person level design is like but those rules simply don’t apply here.  It’s actually kind of amazing just how well the designers have managed to make each compact level seem massive in size by creating a maze out of what is essentially a large box.  Even the simplest levels can take upwards of 20-30 minutes to complete if you don’t memorize their layout.

There’s a large variety of objectives from one level to the next that manages to keep the gameplay fresh considering its length.  Some missions task you with guarding an NPC throughout an entire level as it completes its goals.  Others are search and destroy ops.  The most frequent have you destroying every enemy in a given stage which is fun once or twice but gets old fast, especially once the drone count near triple digits late in the game.

There are a few areas in which the game stumbles which keep it from true greatness.  There is no map or radar to guide you which is insane.  The levels aren’t so big that these would be mandatory features however it sucks not knowing where to go for the missions that have specific criteria.  I also found the lack of a lock-on function or targeting reticle dubious.  Eventually you’ll adjust to manually lining up your shots but its presence would have helped to distinguish the enemies from the backdrops, which they tend to blend into.

With 15 missions in total the single player mode is pretty lengthy and also extremely challenging.  Health packs aren’t in great supply, meaning your shields and health bar can be drained in seconds if you aren’t careful.  The later missions are unfairly balanced because of this.  The enemy AI is pretty smart (for the time at least), crafty enough to dodge your fire and flank you while also utilizing the environment to retreat and avoid taking hits.  Some of the bastards will even try to blow you up kamikaze style upon death!  There aren’t many bosses but the few are tough to beat without sacrificing a few lives as they spawn lesser adds to add to the frustration.

The multiplayer was pretty fun for its time due to the game’s premise and is still entertaining in brief spurts now.  The four-player split screen mode still ran smoothly, a feat most of its N64 contemporaries can’t claim.  There are only two modes, Max frag, a contest to see who can down the most drones, and Last Man, which is self-explanatory.  Its feature lite compared to the games of today but back then that was enough.

For its time Forsaken was a technical showpiece with its 60 frames per second graphics and real time lighting. Iguana managed to achieve this by keeping the entirely indoors in cramped corridors.  All of your weapons cast colored light that will illuminate the environment with their glow which is still cool to witness.  Those that get motion sick should stay away as the game moves at a brisk pace and uses a fish eye lens to great effect.  Now if only they had lavished the same attention on the game’s weak techno tunes…..

Forsaken was a breath of fresh air in 1998 and still feels different from nearly all of the games that have followed since its release.  Had they included a map feature and some form of targeting assist this would truly have been amazing.