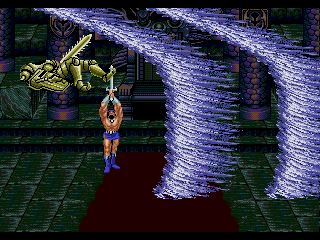 Creating a sequel is a tricky proposition.  You want to retain the elements that fans loved and made the original popular while adding new components that bring them back.  Many times this tends to back fire and can kill a series.  It’s a balancing act that not too many developers get right.  But there is a way out!  If all else fails you can always rehash the first game, which is exactly what Sega did with Golden Axe 2

Golden Axe 2 was released in 1991 as a home console exclusive for the Genesis.  Dark Guld has risen and filled the void left by Death Adder, stealing the Golden Axe and terrorizing the people.  Tyris Flare, Gilius Thunderhead, and Axe Battler return to stop this evil menace.  Standard stuff but its not as if the plot needs to be Lord of the Rings caliber to give us an excuse to bludgeon skeletons over the head with pointy objects.

Although a direct sequel in name from the looks to the gameplay Golden Axe 2 is a carbon copy of the original game, for better and worse. Golden Axe was a solid brawler for its time but standards change and to release the next game in the series that is basically identical to its predecessor seems like a wasted opportunity.  There were so many interesting directions they could have taken the basic premise and in fact they actually did with the arcade sequel Revenge of Death Adder.  If the majority of their effort was poured into that game I guess you could view this as a consolation prize, in which case we got hosed.

If you are at all familiar with Golden Axe you can jump in immediately as there is very little different.  The same basic move set returns for all three characters with some slight additions; this is more about refinement than revolution.  You can now throw enemies in any direction and execute an attack that will nail all sides simultaneously.  The timing of your weapon combos has also been improved slightly, reducing the lag when executing the final hit that used to leave you open.  It doesn’t sound like much but each of these elements was kind of frustrating in the original.  They were at least aware of what annoyed gamers the most and fixed those flaws.

Magic has seen the largest overhaul.  Rather than having to spend all of your potions on one spell you can determine its power by holding down the button and charging it up.  This adds a strategic element to the game and one that can save your life during a challenging boss fight.  In addition to the way magic is used all three combatants have seen changes to their powers as well.  Gilius Thunderhead has lost his proficiency in lightning and now harnesses earth magic.  Axe Battler now sports wind magic while Tyris Flare keeps fire magic with new spell animations.  The cute little gnomes have been replaced with wizards who aren’t going to take any shit from you and will fight back.

But for the little effort they put forth it’s irrelevant.  Rehash is putting it lightly.  The six levels look eerily similar to the first game; for god’s sake there’s even another stage that takes place entirely on the back of a giant animal again.  The enemies are also exactly the same, with only palette swapped variations changing things up visually but least that’s a problem nearly every game in this genre suffers from.  While I might harp on the similarities between the two games Golden Axe 2 is visually superior.  There are many details added to the sprites and the backgrounds are sharper and visually much more interesting.  The soundtrack is also more menacing and dramatic.

You could make the case that Golden Axe was a good game and this is more of the same but in the three or so years since its release new games such as Final Fight raised expectations as to what to expect from this genre.  The same year Sega released Streets of Rage, a beat em up in the same genre that put this game to shame.  With releases like Revenge of Shinobi, Madden, and the bombshell, Sonic the Hedgehog there was far more choices available to Genesis owners, leaving little reason to bother with this retread.  That’s not to say it’s bad, just decidedly average.

I suppose diehard fans of the series will still find much to like in Golden Axe 2 but for the rest of us there are much better games on the system, let alone genre.  They really should have done more to distinguish the game but instead settled for mediocrity.  And things would get much worse for the series on the home front from this point on.