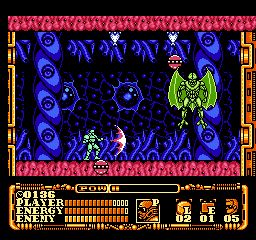 Toward the end of nearly every console’s life a number of hidden gems are released.  Sadly these games go unnoticed because the majority of the console’s user base has moved on.  The NES was no stranger to this phenomenon, and admittedly it’s kind of hard to pay attention to the little buddy when one legendary game after another is released for its big brother.  Power Blade 2 is one such victim, an otherwise excellent action game lost in the shuffle.

Power Blade 2 was released in the fall of 1992.  In the year 2200 the Delta Foundation develops a new cyborg that could tip the balance of world power.  Rather than have it fall into foreign hands the President of the US orders NOVA to destroy it along with the Delta Foundation.  Those familiar with the first game can jump right in since the gameplay is the same along with some additions and exclusions.

Like the first game you can complete any of the 5 stages in the order you choose.  The boomerang returns in all of its glory and is just as effective at taking down the opposition.  The number of powerups has been reduced however you are still just as deadly.  The lone weapon upgrades come in the form of 4 power suits awarded for defeating the 4 optional bosses in the initial stages.  The power suit, rocket suit, patriot suit, and wet suit will all come in handy at some point and are worth tracking down.  Power Blade 2 has a distinct Mega Man tone that is carried out through the entire game with many similar enemies and even graphical elements.  Christ you can even slide like Mega Man too.  That’s not bad company to share and while most games suffer from being cheap knock offs Power Blade has enough unique elements to overcome that stigma.

The biggest change is in the game’s structure.  Previously you were required to find a contact in every level to unlock the computer room and face the boss.  That has been eliminated and instead every level is broken down into 7 or more segments.  I’m of two minds about this: it was extremely frustrating to locate the computer room but have to backtrack however it did encourage exploration of the levels and they were well designed.  Now it’s just a boring trek to the end of the level to fight the boss.  The levels are just as long as the original, maybe even longer, but they suffer from repetition.

The original Power Blade was varied in its environments even though it took place in and around the city.  Power Blade 2 is drab in comparison.  Most levels share the same dark look and tone and even tile sets.  The optional bosses you fight for the power suits are exactly the same with slightly different attacks.  Even the end level bosses look nearly the same.  I don’t know if they were working with a limited budget or cut corners to save time and money but Power Blade 2 doesn’t live up to its predecessor because of it.

It’s still a fun game but is a noticeable downgrade from the first one.  Seeing as how it was one of the last releases in the US it can be hard to track down and you might want to ask yourself whether its worth going to the trouble.