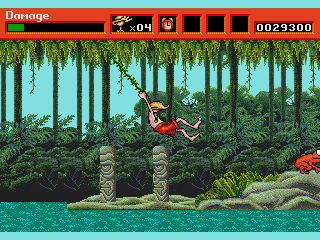 Before Sonic the Hedgehog Sega threw a lot of shit (not literally) at the wall to see what would stick, most of it oddly enough from American developers.  The likes of Kid Chameleon, Alex Kidd, and the like vied for the coveted company mascot spot.  One contender which came later in 1992 was Greendog, a game you’ll rarely hear anyone mention.

The surf dude culture that was prevalent in the early 90s is what inspired Greendog.  A triple threat in terms of extreme sports, Greendog has surfed the biggest waves around and is looking for a new challenge.  After wiping out and landing in another world he is forced to find 6 Aztec treasures to remove the cursed necklace around his neck.  Bummer.

Armed only with a Frisbee most levels consist of a straight path to the end as you eat fast foods for points and in general stay alive.  There are various secondary items to collect, such as clocks to freeze time and a second Frisbee for added firepower but for the most part these aren’t necessary.  Your damage meter is generously long and items to reduce it are in plentiful supply.

Each level is broken down into 2 or 3 sections, with the second half much tougher.  The descent into each ancient ruin is accompanied by an increase in enemies and traps, with next to no items to help you survive.  Roller Blades and Skateboards precede the faster action levels and will put your platforming skills to the test since even the slightest mistake can cause death.  There are only 2 or 3 real “boss” battles if you can even call them that so in most cases the levels end abruptly.  Travelling between islands is done by gyrocopter in faux shooter levels that I feel should have been left out: there more annoying than anything and are exactly the same each time.  But hey, Greendog is extreme, that’s how he rolls.

The meat of the game is sound but what drags down the experience are the sloppy controls and botched hit detection.  The best way I can describe the feel is floaty; anytime you jump it feels like you’re on the moon because you have no weight.  Because Greendog is such a large sprite it’s very easy to misjudge how close you are to landing on a platform or object, and in most cases you’ll fall through when it looks like you should have landed perfectly.  In a game that consists of 90% platforming that is virtually the kiss of death.   But somehow it remains compelling despite these issues.  It could be that although trite the general concept is still pretty interesting.  Or maybe it’s the awesome graphics.  Although Greendog himself is lame the world he inhabits is colorful mix of tropical environments and real world locations.  The soundtrack is a catchy mix of island themes and jazzy up-tempo beats.  So even if you are frustrated by the controls at least the production values will keep you interested.

In most cases when the controls are busted it dooms the game but in this case it’s never so bad that you can’t enjoy yourself.  You’ll just rage at the screen every now and then.  Greendog is worth the few bucks you’ll pay for the few hours of entertainment it provides.