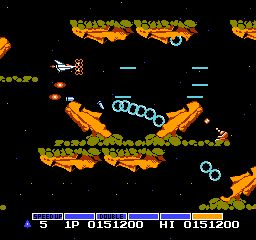 In the grand sea of shooters the Gradius series stands near the top due to its many distinguishing characteristics.  Whether it’s the innovative power up system, the Vic Viper, or just the curious fascination with Moai statues, even if you’ve never played a game in the series you’ve heard of it.  Despite a number of spinoffs, the grand daddy of them all, Gradius, remains the originator.

Gradius was released in arcades in 1986 and later ported to a large number of consoles, the most popular being the NES version.  The people of the planet Gradius are under attack by the Bacterian Empire and pour all of their resources into creating the Vic Viper, a state of the art starship that is their last hope.  Another in the long line of shooters that pit one lone ship against a fucking armada, the story isn’t important, what matters is the gameplay and Gradius has that in spades.  The power-up system is the defining trait of the series and would go on to inspire legions of imitators.

A horizontal shooter, Gradius was one of, if not the first scrolling shooters for the system and would create a foundation of gameplay elements that would be built upon in later installments.  The first distinguishing characteristic is the powerup system.  Unlike most games with their instant and one shot abilities, collecting the energy icons highlighted one of six available options: speed up, missile, double, laser, option and shield.  Your choice and rate of acquisition is largely in your own hands and will influence just how easy or hard the coming challenges are.  Everyone prioritizes different weapons and that choice of “play style” is what would draw and continues to draw many gamers to the franchise.

Despite its classic status Gradius is a bit Spartan compared to other shooters.   There are only 6 levels, with each lasting only a few minutes at most.  Once fully powered up you will blow through the game, which at most lasts about 20-30 minutes.  That isn’t to say the game doesn’t put up a fight; later levels such as the Moai stage shower the playfield with bullets and the only boss in the game, the Mothership becomes faster and harder to hit.  One stray bullet is all it takes to die, and due to the checkpoints will leave you in the middle of a level with nothing but the standard pea shooter, a recipe for disaster.  But the strengths of the game’s design are such that Konami has been able to use the same system for subsequent Gradius games and the Salamander series with very little updating since it largely isn’t necessary.

While some facets of the game’s design have not stood the test of time Gradius still remains a retro gaming classic.  The NES version is a very good recreation of the arcade game and even offers the Konami code if the challenge is too much.  There are numerous ways to play the game nowadays so there is no excuse not to relive a little bit of gaming history.