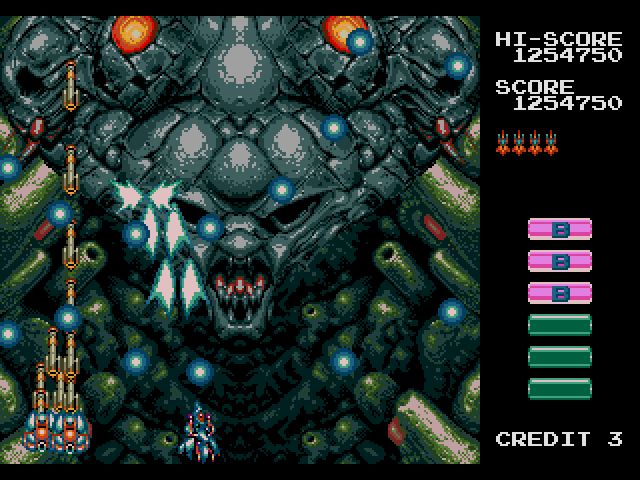 During the 16-bit era the shmup seemed to reach the height of its popularity in the west, with releases seemingly every week.   But as with all things its moment in the sun was brief and would eventually start to fade by 1993-94.  In Japan it was a different story with the genre prospering well into the PS2 generation.  The genre would eventually evolve into the danmaku or bullet hell style of shooter of which Grind Stormer could be considered an early incarnation.  This arcade release was eventually ported to the Genesis but the Sega’s 16-bit marvel simply isn’t up to the task of recreating the arcade game’s intensity and introduces some issues of its own.

Normally the story in a shmup is completely a non-factor but Grind Stormer is a bit strange.  In the distant future a virtual reality game has come along that is so addictive the government feels the need to step in.  They send in a lone agent (you) to investigate, essentially tasking him with beating the game for the sake of mankind.  Captain N has nothing on this guy.

Grind Stormer has two unique power-up systems selected before starting the game.  Grind Stormer mode is exactly the same as the original, with floating power-ups dropped by enemies in addition to side upgrades such as speed up/down, a shield and extra points.  The developers were kind enough to add screen clearing bombs that also grant temporary invincibility for clutch moments.  V・V or (V Five) mode introduces a traditional Gradius style weapon layout powered by gems, allowing you to choose exactly which weapons you want.  In addition you have options at all times but they are less versatile in their function.

The differences between the two systems are wide enough that it almost feels like two separate games.  The V・V style of power-ups allows you to change weapons as necessary while GS mode leaves you at the mercy of the game’s random weapon drops.  On the other hand new weapons drop frequently enough that it isn’t really an issue.  Having the option between the two allows gamers a certain amount of comfortability, something that will be needed when tackling this beast.

There are only three primary weapons available, Shot, Missile and Search but considering their individual functions it’s more than enough.  The Standard shot can be upgraded to fire in multiple directions but its true power comes from lining up the ship’s options to create one large beam of destruction.  Missiles only fire straight ahead but have an incredible rate of fire next to their power.   Search turns your options into homing beacons that will aggressively seek out and attack any object on screen.

Managing each weapons uses is crucial to long term survival.  A fully upgraded shot covers a wide spread but also leaves significant gaps in between blast.  Missiles feel the least versatile; since they only fire in a straight line you’ll have to either position your ship or options to hit your targets, oftentimes a dicey proposition.  The search varies between absolutely overpowered or your worst nightmare.  It’s fairly weak but it will destroy weaker enemies in one shot and moves pretty fast.  Unfortunately the options tend to stick to larger ships or objects like glue, leaving you exposed with a rinky dink pea shooter for offense.  You have to babysit them to get the most out of their use.

Although Grind Stormer is only 5 levels long it certainly feels twice that length.  Each level is as long as two or three from most other shmups and are a true test of your patience and skill.  Make no mistake this is one of the hardest shooters released during that console generation.  One hit leads to death with no respawn, instead sending you back to a checkpoint.  Shields are rare and the game is stingy with awarding extra lives despite throwing around extra points with reckless abandon.  With limited continues few will see the end of the beast without cheating.

Enemies often attack in large groups but it isn’t the ships you should be concerned with, it’s their bullets.  Grind Stormer offers a brief glimpse at what the shmup genre would blossom into with as many as thirty to forty bullets flying at once in addition to swarms of aliens and whatever else the designers came up with.  There are very few moments you aren’t running for your life as a ballet of bullets closes in on your position.

It’s in this aspect that the Genesis version suffers the most.  In short the system simply lacked the power necessary to handle the chaos the game brings, resulting in severe slowdown and flicker.  The flick is so bad that boss fights devolve into a stuttering mess.  This is bad since you need to see the bullets to dodge them and with as many as the game throws around it’s really unfair to die due to the game’s failings, not your own.  It makes an already brutal game that much harder and one that I’m less likely to recommend.

Graphically the game has undergone a large loss in detail and color.  Aside from the lower resolution the game is darker overall.  In the arcade Grind Stormer was a vibrant game but this port has a very washed out look to it, resembling an early Genesis title rather than a game released at the peak of its life.  The music is terrible, completely lifeless and forgettable.  When it comes down it this should have been saved for a Saturn or PlayStation release.

Is the game bad overall? No but it does have its flaws, ones that mar the experience. There are some good ideas in there and the game is fun yet challenging when technical limitations aren’t at hand.  But only the most dedicated shooter fans will be able to see past them.