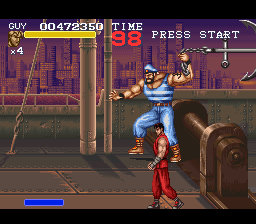 1995 was an interesting transition year for the gaming industry.  The PlayStation, Saturn, and (supposedly) N64 were all set to be released in the fourth quarter meanwhile the SNES and Genesis were still trucking along.  That’s not even counting the 3DO, Jaguar, and CDi although all 3 were pretty much irrelevant by that point.  While many publishers would hold back their most popular franchises for their 32-bit debut Capcom brought out sequels in some of their most beloved franchises for the SNES for one last hurrah.  Final Fight 3 corrected many of the flaws apparent in the second installment and is simply a great beat em up with some cool features that add longevity to a genre that is usually built on all too brief campaigns.

With the Mad Gear gang completely eliminated Metro City has finally enjoyed some peace.  But it doesn’t last long as a new gang steps up to fill the void left in their absence.  The Skull Cross Gang are staging riots across the city forcing mayor Mike Haggar to step in personally along with returning martial artist Guy, police detective Lucia, and the mysterious Dean.

Although Final Fight 2 managed to capture the look of an expensive arcade unit pretty well it did nothing to advance the genre and came across as a rehash.  Final Fight 3 comes with a host of improvements that make kicking ass through Metro City enjoyable in the long run.  Aside from 2-player coop you have the option to do so with an AI controlled ally to simulate the experience if you’re a lonely nerd with no friends.  The AI is more than capable of taking care of itself and actually helpful if a little bit too aggressive in moving forward at all times.  It’s a welcome feature if going solo isn’t appealing or too hard.  While slowdown rears its head with too many enemies on screen it isn’t enough of a factor to completely ruin this cool feature.

All 4 fighters are armed with a vast array of fighting techniques, more so than most beat em ups combined.  This has always been my biggest pet peeve with this genre, the fact the designers seemed content to arm you with a simple punch, punch, kick, combo, a jump kick, and a throw and called it a day.  In addition to the standard arsenal of punches and kicks each character can dash and is armed with a number of grappling techniques depending on your position.  You can also switch position while holding an enemy if its more advantageous.  Some techniques are even activated with Street Fighter style button combos, a nice nod to Capcom’s roots.  Most important of all the controls are responsive and intuitive, enabling you to toss bad guys around effortlessly.

Despite a scant six levels Final Fight 3 has a few incentives for replay value.  There are multiple endings determined by a few key factors: the difficulty setting, character used (the most interesting is Dean) and the path taken to get to the end.  That’s right; there are multiple routes through some of the levels that will lead to all new areas with different enemies and bosses.  It at least adds about an hour or so to what is normally a brief experience and a welcome gesture.

My complaints with the game are few but still worth noting.  There is still a glaring lack of variety in the enemy roster; be prepared to fight a never ending stream of Johnnies, Billies, and Fat Jacks.  They try to stagger it so every will present at least one new enemy but that still amounts to less than 10.  It’s pretty frustrating to fight 3 or 4 of the same guy at once repeatedly for the length of the game.  With the improved combat mechanics the game is also significantly easier than prior games.  I managed to finish the game on my first try without using any continues, a feat I never managed in either of the prior two games.  I guess that means the game is balanced but it could have at least put up something of a struggle to kick my ass.

Graphically I found the second game superior in spite of part 3’s better animation.  The world setting allows for more interesting vistas to stare at while punching faces.  I get that the setting is once again Metro City but there are a few areas that are very clear call backs to the first game, Round 5’s factory and the Skull Cross Gang’s hideout in particular.  It might be a homage but it just seems repetitious in my eyes.

As one of the last pure entries in the series Final Fight 3 allowed the series to leave the 16-bit era on a high note.  While the new features weren’t revolutionary they spiced up a tired genre enough make for one of the most playable beat em ups for the SNES.