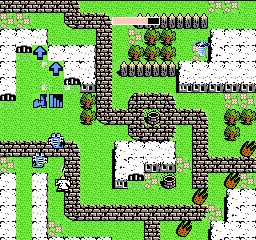 Well every publisher has to start somewhere.  Even the likes of Capcom and Nintendo have a few skeletons in their closets that they wish gamers would forget about.  While Square is known for their legendary RPGs today prior to the success of Final Fantasy they “experimented”  with nearly every genre before finding their legs in the turn based category.  Some of those games like Rad Racer were enjoyable excursions while others are better left unspoken, like their first North American publishing effort, King’s Knight.

Like most retro games it all comes down to saving a girl.  The princess Claire has been kidnapped and it’s up to an unlikely team of 4 to rescue her from the Dark Dragon.  But these stalwart heroes need to be trained first before beginning their final assault on the evil dragon.   You can’t possibly believe you’d stand a chance from the get go do you?

While King’s Knight is basically an overhead shooter it attempts to inject a bit of depth to a genre whose mechanics were pretty set at the time.  The RPG mechanics of leveling up your individual skills could have gone a long way towards making the game even slightly interesting but fall flat in the end.  As it is King’s Knight has far too many issues to risk wasting even the meager 20-30 minutes it would take to finish the game.

The game is broken down into 5 chapters with the first 4 serving as a warm-up to the final level.  Each of the 4 characters (Ray Jack the Knight, Kaliva the Wizard, Barusa the Monster, Toby the Thief) only have a basic shot to defend themselves with.  Their only defining traits are their stats, of which each has a particular specialty that starts out higher than the rest.  Speed, jump (which is stupid since you can only jump out of water), and power can all be upgraded multiple times by finding the appropriate power-ups in each level.  While it sounds nice in theory in practice you’ll need to max out each stat to notice any tangible difference.   All character progress is recorded for the final level where the game changes slightly and not for the better.

The levels are constantly scrolling downward as you maneuver the environments destroying everything in your path.  Nearly every object in the surroundings can be destroyed for power-ups but they also house enemies that will immediately bum rush you.   It’s kind of a bad situation as you need the power-ups to upgrade your slow hero in order to stand a chance but also to find the Elements necessary to complete the game.

Each chapter stars a different hero and while you can simply make a beeline to the end of each level only destroying parts of the highly destructible environments there is something resembling a “quest” in each one.  All characters have an element they correspond to and the main objective is to find the hidden cave in each level to obtain this element which is mandatory to complete the final level.  The elements can also be found by destroying everything in your path, and you’ll need to do so as you need 4 pieces of each element to activate their special powers.  Unfortunately the game does not communicate this in any fashion, meaning once you reach the final stage it’s entirely possible to be screwed and have to start over again.

The final chapter sees all 4 characters joined together in a cross formation.  You can switch the lead party member by touching the arrows littering the level which you’ll have to do as each hero’s power is necessary at some point to reach the end.  It’s a nice gesture but the execution of this is lacking.

First of all, having all 4 characters on screen doesn’t work because they all share one life bar and can be targeted individually, making bullet dodging nearly impossible.  If you haven’t collected enough of the elements then you’re screwed but the game doesn’t have the sidebar of the MSX version that keeps tabs of everything.  Not only that, the special abilities can only be used in certain areas and you need to have the appropriate character in the lead to do so.  The only hints given are the demon statues that attack you but that is so obtuse it’s not even funny.  It’s very easy to miss the switching icons and once passed by its’ gone for good.  I imagine most who ever bother playing this game will screw up somewhere and have to start over and seeing how bland the game is more than likely they’ll play something else.

There you have it.  As Square’s first published effort in the US they definitely could have chosen a better game.  Why they thought publishing a game from 1986 so close to 1990 was a good idea I’ll never know.  I guess you can see why they thought Final Fantasy might be their last game ever considering the games they were making prior.