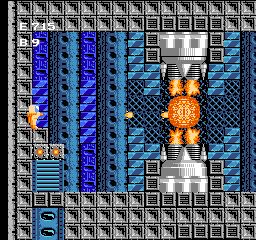 I remember Air Fortress primarily from its cheesy commercial.  The advertisement was full of all of the typical 80s tropes when promoting videogames: corny extreme voiceover, footage cut to make the game seem action packed, and a call to action to buy it now.  Anyone who has actually played the game knows it’s anything but a balls to the wall action game but slower paced adventure overall.  It certainly is pretty intense at points but not for the reasons the overzealous TV guy would have you believe.

Air Fortress could possibly have the best reason out of any game to send a single man to stop an alien invasion.  The citizens of the planet Farmel have finally mastered space travel and set out to explore the galaxy when numerous massive Air Fortresses block their path.  Sending out their entire fleet to meet them head on, Farmel’s forces are completely decimated in one big epic fail.  As a last ditch attempt to save face they send Hal Bailman to infiltrate each fortress and destroy them from the inside.

I might have embellished it a little but the jist of it is true.  Air Fortress is basically 3 games in one and while each element won’t knock your socks off the game as a whole is pretty solid.  For those that like a meaty challenge Air Fortress has that in spades but robs you of the satisfaction of seeing the ending by pulling a dick move like Ghosts N Goblins and forcing you to play through it twice.  Well not literally force but you get the idea.  By the end of the last fortress I doubt anyone will want to go through it again.

Every level begins with a shooter segment as you approach the fortress.  These sections serve as little more than a chance to power-up before the real meat of the game begins; think Gradius.  The few enemies that appear offer little resistance but this is still dangerous as you can only sustain a single hit before death.  The energy and bombs collected can only be used for the infiltration portions of the game, and it will behoove you to collect as much as possible before it ends.  While the shmup portions of the game start off short they gradually become longer much like the actual fortresses themselves.

Once inside a fortress the game takes on a different tone.  For one you are on foot and can freely fly about as you please provided you have the energy.  Every action performed costs energy, from flying to actually shooting however standing still will refill it back to your current maximum.  Obviously taking hits will deplete the meter but the various traps set up will do the same as well.  It might not seem possible to die at first glance because you’ll have so much energy (usually in excess of a thousand) to start but that will deplete rapidly in the latter portions of the game.

The objective of each fortress is to find the core, destroy it then find your ship to escape before it explodes.  An easy enough task in the beginning stages since the layout of each fort is simplified but the game has massive difficulty spikes, most notably in Area 4, 7, and 8.  The layouts of the individual fortresses become monstrous by 8-bit standards, necessitating the creation of maps.

Once the core has been destroyed you have to find your ship and leave lest you get caught up in the explosion.  All those forks and separate paths you more than likely ignored were there for a reason; the level design in Air Fortress is pretty amazing but the gameplay undermines that due to the very short window of time to find the exit and escape.  Technically you can explore to your heart’s content as long as you don’t destroy the core but you’ll waste precious resources doing so.  On the other hand you’ll have to because one wrong turn equals instant death, especially in the later fortresses.

Getting to the end of the game is definitely a vexing ordeal but before you can celebrate the game informs you that the Air Fortresses have been reactivated, meaning you have to destroy them again in a second quest.  Yup, straight Ghosts n Goblins style bait and switch.  If you have the patience to navigate through the 6th and 8th fortress I seriously doubt you’ll want to go through that again.  At least the game has password saves.

Overall Air Fortress is a solid and entertaining game.  It’s frustrating but not to the level of Battletoads but doesn’t have the bad reputation of that game, more than likely due to the limited quantities the game was allegedly printed in.  Whether that’s true or not is a mystery but you can find the game dirt cheap either way.