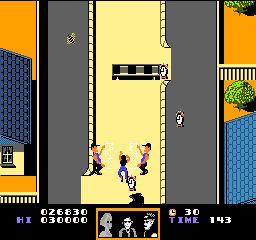 Ah, LJN, my arch nemesis, we meet again.  Wherever a popular license existed back in the 80s and 90s LJN were there to completely fuck it up in search of the quick and easy buck.  The number of franchises from other media ruined by this company reads like a hit list; X-Men, Terminator, Jaws, and the subject of this review, Back to the Future.  Not that I have any great love for BttF but this game is the worst kind of terrible and should be avoided like the plague.

The game follows the plot of the movie pretty closely for what it’s worth.  Marty McFly ends up back in time in the 1950’s and has to find his way home without screwing up the space/time continuum.  They at least got that part right.

Honestly, how would you even make a compelling NES game based around BttF?  This sure as hell isn’t it.  When it gets down to it the movie is a relatively straightforward sci-fi comedy, not exactly conducive to a platformer or the typical genres exhibited on the NES.  While I’d like to say the developers made a valiant attempt to create a compelling game the truth is they recycle the same sparse assets for the length of the adventure, showing off just how cheap a production this is.  I distinctly remember walking almost an hour to and from the store with friends to buy this game when I was 9 so it’s terrible quality felt like a double edged sword considering the journey just to purchase the stupid thing.

As Marty your job is to navigate the streets of Hill Valley on the way to 4 important locations from the film to complete minigames in order to progress: the diner, Hill Valley High School, the dance, and finally using the Delorean to hit 88 mph and head home.  The objective is simple but getting there is not.

The entire world has it in for you, from hula hooping cheerleaders to even the fucking bees.  There’s a large list of obstacles that you need to avoid; bullies in pink shirts who blame you for their terrible fashion choices, window movers, manholes, and park benches.  It doesn’t help that Marty is a giant pussy and will trip over everything your path which doesn’t sound so bad on its face but carries a stiff penalty.

You have two timers to worry about, the actual game clock and the photo of Marty and his family that slowly disappears as you progress.  The photo represents time trying to correct itself and “remove” him from the picture, so to speak.  The only way to prevent this is to collect the clocks arrayed in the streets.  The photo is the biggest issue you face as it fades pretty quickly; anytime you hit an obstacle it takes a few seconds to get back up, time you can’t afford to waste.  The later levels are pretty stingy with clocks, meaning you’ll have to execute near perfect runs through each stage to avoid losing a life.

If I had to sum up BttF in one word, repetitive.  All of the street levels are exactly the same; same enemies, same traps, and graphics just rearranged.  This is a pretty long game so seeing the exact same elements ad nauseum with the only difference being a slight shift in color palette is terrible.  There’s only one song in the game that loops endlessly from the moment you boot up the game.  I know Acclaim/LJN usually cheaped out with their licensed products to maximize profits but they could have at least been more transparent about it.

On top of that this is one of the hardest games in the NES library so all of the cheesy tactics the game uses to kill you feel worse since there are no continues, passwords, or battery backup to record your progress.  In addition extra lives are near impossible to come by.  You’ll need all the lives you can muster to complete the borderline insane minigames.

The minigames had the chance to redeem the rest of the package but are so terribly executed that I imagine most gave up at the cafe which is the first one.  The café has you knocking out Biff’s bully entourage with shakes.  You have to defeat at least 50 to move one but it becomes so hard due to the stupid angle and the fidgety controls that I wondered if it was possible to complete back in the day.  If even 1 manages to reach the counter you have to complete the prior street level for another shot, which applies to the other 3 as well.

Blocking kisses from your younger mom is easier but the sea dance once again returns to the maddening difficulty of the café.  Catching the notes to fill the music bar and make your parents fall in love is frustrating once again because of the controls and the low margin for error; missing a note nearly depletes the bar and you only have a limited amount of time to fill it.  You would expect the Delorean level to at least meet a minor level of decency but it falls flat.  Judging where the lightning bolts have landed is maddening; sometimes you’ll clearly run over one with no repercussion while other times you’ll steer clear but still slow down.  Be consistent god damn it.

Terrible, just terrible.  I’ve played my fair share of bad games and Back to the Future is one of the worst.  There are no redeeming qualities in this entire package and you’re better off pretending it doesn’t exist, lord knows I wish I could.