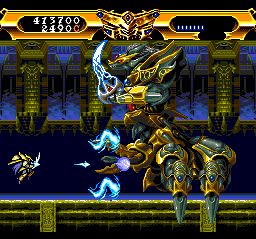 This might be lofty praise but I stand by these words: Lords of Thunder is pound for pound the best shooter released for the Turbo Duo.  Those aren’t words I use lightly; next to the Genesis and Saturn NEC’s console played host to the greatest lineup of shooters you can imagine so for one to stand out it really needed to be special.  Lords of Thunder is all that and more, too bad not many have played it.

While Sega had Sonic and Nintendo had Mario NEC and Hudson were never able to create the rabid fan base around Bonk that would get people to fork over money to buy their system.  One of the few games that received a heavy marketing push was Lords of Thunder, the closest the Duo would ever get to a killer app.

The sorcerer Zaggart and his six minions of Mistral have decided that they deserve to rule the world, carving out separate territories to reign over.  The God Knight Landis is summoned to put an end to their reign of terror and save the world.

Marketing for the Turbo-Grafx and by extension Turbo Duo was pretty much nonexistent during the 16-bit era.  Sega were going full tilt with the scream ads and the whole blast processing spiel while Nintendo would eventually adopt the Play it Loud campaign. Aside from Johnny Turbo it seemed NEC/Hudson/TTI were content to sit in a corner while the two titans battled it out.  With Lords of Thunder however they realized they had something special on their hands and mailed a VHS tape to thousands of gamers across the US (having youtube and the internet back then would have been a god send) in an effort to spread the word about this great game.  Cheesy production aside it was effective in making myself and many others I’m sure interested in this supposed killer app.

Touted as a sequel to Gate of Thunder in reality it is in name only.  Lords of Thunder differs in nearly every facet, from gameplay down to its setting.  Speaking of setting, thank god it isn’t another space shooter.  Outside of Phelios, Cotton and Elemental Master the pickings were slim if you wanted to be something other than a lone ship against an alien armada.  The fantasy setting is a welcome breath of fresh air in an otherwise stale genre but that isn’t the only facet in which Lords of Thunder differs from its contemporaries.

You are presented with a world map with six continents to choose and complete in whatever order you like with the seventh and final stage unlocked once they are finished.  Each land is aligned with a different element which also informs the majority of the enemies you’ll face as well.  Since you can complete them in any order there’s no real difficulty curve to speak of; you can simply come back with a fully powered up suit of armor if need be.

The Mega Man overtones don’t end with the level select, you also have a choice of 4 elemental armors at the beginning of each level.  Aside from their elemental properties their method of attack and rate of growth differ as well.  The Wind armor sends out piercing lightning bolts that spread in a wider arc at level 3.  The Earth armor fires individual bombs, first downward, then a second upward, and finally the area of effect is increased at its maximum.  The Water Armor is clearly the most powerful as its attack covers the widest area at level 1 then grows larger and fires backwards at level 3.

While you might guess that there’s some amount of depth when it comes to elemental strategy in a particular stage the reality is the opposite.  Aside from your attack power and range you aren’t granted any special damage.  It basically boils down to which armor you prefer although there are certainly points where a particular attack might be the best option.  While I like the Earth and Wind armor there forms of attack are too specific to be of broad use.  The Water armor is the overwhelming favorite when it comes down to it but if you like being a special snowflake be my guest.  Any power-ups you’ve built up for each armor carry over so you can save crystals for other assorted goodies in the between level shop.

Unlike most shooters you have a generously lengthy life bar, a factor you’ll appreciate as the action is fast and relentless.  There is rarely a moment where there are less than 2-3 enemies on screen of something blowing up, much like Gate of Thunder.  However that game pales in comparison to just how crazy it gets.  Don’t let the life bar fool you; the penalty for taking hits is twofold.  Not only do you lose health but your current weapon power drops as well.  Item drops to build it back up come frequently so it isn’t completely hopeless but isn’t far-fetched to meet the end level bosses with minimal firepower.

Overall Lords of Thunder presents a moderate challenge.  On normal it all comes down to perseverance as there are very few difficulty spikes.  You can alleviate this somewhat by spending your hard earned crystals in the shop to max out your bombs and firepower.  Although you can buy the weapons it’s up to your skill to keep them.  The other two difficulty settings will provide the challenge you seek if need be and this is one of the few games where I’ve actually gone back done so.

Graphically Lords of Thunder still holds up today.  There is a great deal of variety to the environments and no shortage of demonic and mechanical monstrosities thrown in your path.  I like the large enemy variety as well; each continent has its own unique set of baddies to destroy, making each feel distinct.  The bosses are the game’s true graphical highlight as they transform into massive demons who take up the majority of the screen.  The soundtrack as well is fantastic; the fantasy backdrop might seem like an odd match with the guitar heavy soundtrack but the tunes are composed so well that they add to the rabid pace of the game.

If you’re reading this review you’re either a fan of the genre or interested in what Lords of Thunder has to offer.  This is quite possibly the greatest shooter available for the console and one that has withstood the test of time admirably.