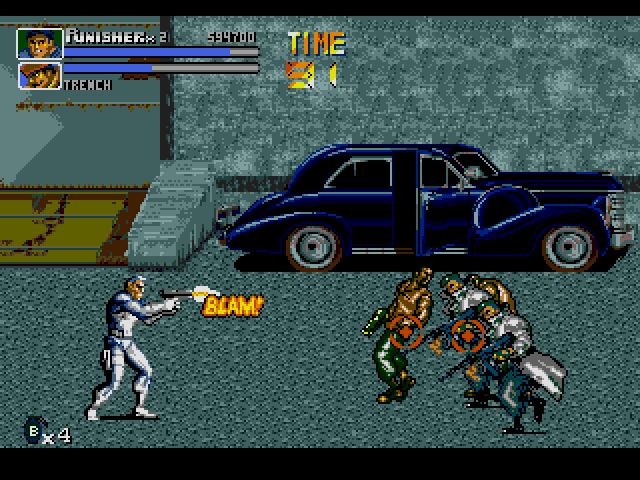 I remember the Punisher arcade game as a bad ass beat em up that fully captured the essence of the character’s brutal war on crime.  It was one of the few arcade games I actually managed to finish before the inevitable home port, a feat that sticks out in my mind considering most coin ops were designed to drain your quarters.  Yeah, I was that naïve dude that honestly thought I could finish the Turtles arcade game or Final Fight with 3 quarters.  The Punisher would eventually find its way home on the Genesis but somewhere along the way a lot was lost in translation, leaving only a competent version of a once great game.

The Punisher has declared all-out war on the Kingpin and plans to decimate his criminal organization bit by bit before taking the big man out.  Nick Fury tags along for some inexplicable reason for some two-player action.

Released in 1993 the Punisher has a lot in common with Capcom’s other beat em ups of the time, most notably Final Fight and Warriors of Fate.  Running on the same CPS1 hardware it had a vibrant look that popped off the screen as well as stunning animation.  The Genesis port loses far too much in the porting process and it almost feels like a completely different game.   There were other added elements that I imagine were to make up for it but instead ruin the game’s balance.  While it isn’t a bad game necessarily it does take a back seat to the beasts of the genre.

As either Frank Castle or Nick Fury you have a large range of moves at your disposal.  Aside from the standard arsenal of punches and kicks the true highlight of the battle system comes from the large number of grappling moves you can execute.  From body slams, gut punches, to throws it’s satisfying to move in close and perform a wrestling move on an unsuspecting thug.  Neither character can actually dash but instead will perform a short hop or roll to build momentum and increase the power of the next attack.  Occasionally a group of thugs will pull out some heat and it’s in these rare moments that you are allowed to do the same.  Since you have unlimited ammo go to town on their asses!

While it does its best to bring the arcade experience home some cuts had to be made and they do affect the game’s quality.  Most of the breakable background objects have either been removed or are just parts of the scenery now.  These breakable objects were usually the primary source of weapons but now that has shifted to obtaining them from fallen opponents.  I do miss the comedic aspect of destroying the car the enemies arrived in and seeing the driver burned to death.  A few enemies have also been removed and this is the worst cut of all.  In an effort to make the game longer the game throws more waves of enemies at you consistently.  Unfortunately it means you’ll kill 7-10 palette swapped bad guys in a row which becomes tedious quickly.  If they bothered to put up any kind of resistance maybe it could get interesting but in most cases they sit and wait for their turn to get an ass whopping.

In a page ripped straight out of 1991 this version of the game features some censorship like the SNES port of Final Fight before it.   The female ninjas have less revealing outfits, some of the blood is gone, and references to smoking have been removed.  The first boss Scully was shot and killed following his interrogation but is now simply thrown off screen.  In the grand scheme these are mostly minor but they do stick out considering Sega had long since created their own ratings system and made it available to every one of their licensees.

In addition to the censorship the graphics have undergone a serious downgrade.   The game is significantly darker with less detail overall.  The color scheme used to replace the missing colors is very gaudy, giving certain levels a different “feel”.  All sprites have undergone a noticeable size reduction; in the arcade the sprites were relatively huge.  Certain enemies were redesigned and are plain ugly; the second boss Guardroid stands out in particular.  While it’s to be expected due to the system’s limited color palette it really is no excuse considering the vivid graphics of the Sonic games and Capcom’s own Super Street Fighter 2 released in the same year.

As a whole this is still a more than competent beat em up; unfortunately it has to swim in waters occupied by a few sharks, namely the Streets of Rage series.  Capcom did a decent job of porting the game but I feel could have done better, especially considering the work done on Super Street Fighter 2.