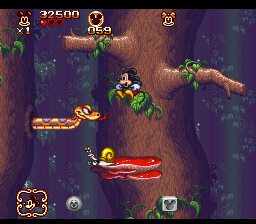 Magical Quest starring Mickey Mouse was a huge success for Capcom, one in a long line of successful Disney licensed games from their development studios but even more so as it was their first one for a 16-bit console.  So it stands to reason  that a sequel would follow, cuz we all know just how much Capcom love their sequels.  But this time Mickey Mouse isn’t alone as Minnie tags along for some coop action.  Two heads are better than one or so they say but in this case while the game is still good it loses something as a result of accommodating two potential players.

Mickey and Minnie arrive at the circus and plan to spend the whole day having fun but find the place completely abandoned.  Goofy arrives and tells them that everyone had disappeared including Donald and Pluto.  Like any good friend the two decide to find them and figure out what has happened at the circus.

The first change you’ll notice is the option to choose Mickie or Minnie.  While it’s a nice gesture the choice is purely cosmetic (or aesthetic) since both characters function the same.  Along with a second character comes cooperative play.  The addition of coop opens up some interesting options for coordinating boss fights or collecting items since both players don’t have to use the same costume all the time.

And speaking of costumes the Great Circus Mystery comes with 3 new outfits for Mickey and company to change into it.  The sweeper outfit arms you with a vacuum cleaner that can suck in most enemies and objects and will change them into gold coins, a handy feature.  The safari suit equips you with a pick to climb walls and swing from blocks.  The cowboy outfit is a nice departure, as it comes with a wooden horse on a stick that allows you to pogo jump; in combination with the cork gun it’s your best offensive option.  Not that the two mice aren’t capable on their own, their base form is still the only one that can pick up and throw blocks and enemies.

The game covers a lot of diverse terrain, from the initial circus to a haunted castle and eventually Emperor Pete’s fortress.  Despite lasting only six levels each is broken up into 3 to 4 sections with a mid-level boss tucked in between.  For those that complained about the lack of a save option in the first game (who are these people, the game wasn’t that long!) there are passwords to record progress not that you’ll really need it.  While some of these levels might seem reminiscent of the first game the layout and graphical style is completely different to avoid déjà vu.

Not that the game doesn’t have some elements of that.  The safari costume is functions near identically to the mountain climber suit of Magical Quest while the sweeper outfit performs the exact opposite of the fireman suit.   I feel they really should have gone with wildly different powers to avoid the comparison and offer newer gameplay options.  As it is the levels feel as though they are covering familiar territory and playing it safe.

Because of the two player coop the levels themselves have been made simpler to accommodate varying levels of skill between players.  I suppose it would be asking a bit too much to have two players navigate something like the trickier swinging challenges of  Magical Quest’s mountain level but they could have come up with something that posed a bit of a challenge.  The straightforward level design becomes boring after a while, regardless of whether you have a friend to tackle them with.

While it might lack in the level design category the Great Circus Mystery is still visually pleasing to the eye.  As a multiplatform release it holds up on both platforms.  The mode 7 effects of the first game have been tossed aside to maintain platform parity and honestly they didn’t add much to the game anyway.  It’s clear this was built with the SNES in mind but even so the Genesis version compares favorably, with its higher resolution making up for the loss of color.

Despite its similarities to the first game this is still a good game that is worth your time but could have been even greater with a little more creativity.  Capcom rarely failed with the Disney license and this game is no exception.