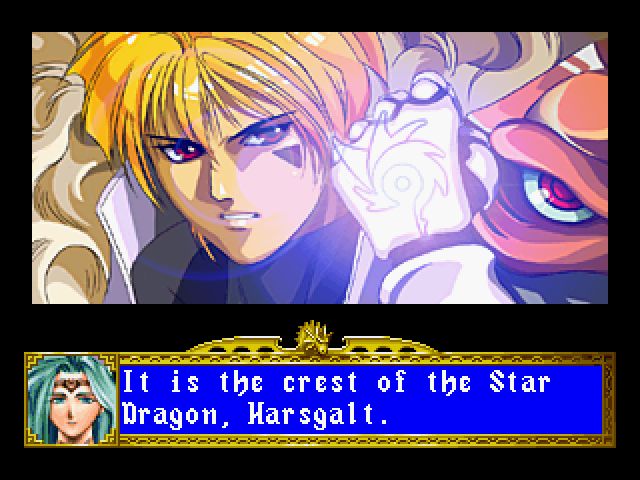 I wasn’t always a fan of strategy games, I‘ll freely admit to that.  I was raised in a simpler time where big dumb action movies starring Sly and Schwarzenegger were released practically every week.  The games of the time reflected that leaving me with little reason to flex my brain muscles.  But as I became an older and wiser gamer games like Final Fantasy Tactics and Ogre Battle gave me a new appreciation for the strategic gameplay.  But it was Dragon Force that would truly make me a fan of the genre.  To this day it still remains one of the best strategy RPGs ever made.

Long ago the world of Legendra was saved from disaster from the evil god Madruk by the star dragon Harsgalt.  His chosen warriors, the Dragon Force let their pride and personal disputes get in the way of their alliance, leaving the dragon to face Madruk alone.  Lacking the power to destroy him Harsgalt instead sealed him away to one day be destroyed by a new Dragon Force should the need arise.

300 years later Legendra is governed by 8 monarchs.  The peace enjoyed throughout the world is shattered when Fandaria’s Goldark declares war on the rest of the world, spurring the remaining seven into action.  But this is just the beginning of a much larger threat as Madruk has begun to stir….

Although the premise is strong enough to propel the game ultimately Dragon Force isn’t story heavy.  The important story bits occur only when you’ve subdued one of the eight members of the DF and at other set points within the game closer to the end.  Every ruler has a few character and story events  that are unique to their quest which avoids making replaying the game monotonous.  Working Designs did an excellent job instilling some amount of personality into each general, no small feat considering the sparse dialogue they have and their jokes are well timed.

Dragon Force is unlike any other strategy game you’ve ever played barring Brigandine, an obscure PlayStation release I doubt most have heard of.  Initially you can choose from any of 6 monarchs who all occupy a certain region of the map.  All leaders have 5 generals and 3 castles to start and the object of the game is to unite the Dragon Force, which basically means taking over each kingdom the order left to your devices.  Some emperors have it tougher than others; Leon is situated in the middle of the continent and will have to fend off attacks from all sides to expand.  Mikhal is on the border of Fandaria and Tradnor, making it tough to branch out since he is attacked relentlessly.  Conversely Junon is located to the far north and can see an encroaching force coming a mile away, not that most will bother to come that far.

The game is split into two halves.  The Risk style world map can be scrolled to observe each region, something you’ll want to do as every kingdom has the same goal and will make their own moves to accomplish them.  It’s fascinating to watch as nation tries to muscle in other territories and observe the wins and losses since it can benefit you at the same time.  Waiting for the moment that say Leon is left with one castle and no generals will make your job easier.  This is only scratching the surface of the depth available.

The administration phase will occur every 10-15 minutes and will freeze everything as you hold court.  Here you can bestow awards on your generals, increasing the max number of troops they can command as well as keeping their loyalty.  You can speak to each general to see their state of mind and suss out who is currently thinking of leaving or which castles to search as well as try and recruit any captives you might have picked up in the field.  Lastly you can search your castles for items and weapons to pass out.  There is no limit during this phase and once you’ve built up a sizable number of generals it does become tedious but beneficial to take your time and do everything.

With over 150 Generals in the game many share the same sprite but that’s for a reason beyond budgetary concerns.  All generals have a class that informs their special abilities.  These special abilities can turn the tide of battle when used correctly and have to be taken into consideration when choosing who to face off against.  A spirit user might be terrible in a duel but can decimate your troops with a spell such as holy shield; ninjas can completely shut down mages with assassin star, etc.  Class also plays a factor if a battle comes down to a duel.  Dragons and samurai make excellent duelists while any magic user will most likely lose.

Attacking or defending a castle will initiate combat.  Its’ very Street Fighter like in its presentation, allowing you to choose which general to face the current opponent, the battle quotes, and the timed combat functioning as a sort of round system.  Should both sides use up all of their soldiers it becomes a duel.  You can either choose to fight without any direct control or retreat which might lead to that unit’s capture.  Once the timer runs out in a battle it’s a draw with both characters unavailable for the remainder of combat.

All generals and leaders command a particular set of troops, be it soldier, monks, mages, archers, cavalry, harpies, samurai and dragons.  There’s a hierarchy of strengths and weaknesses between all types, with dragons at the top.  Samurai for instance decimate dragons while mages drop harpies like a knife through butter.  Not that these can’t be subverted of course; with the right battle formation it’s entirely possible for 20 soldiers to destroy 60 beastmen with few casualties.

Speaking of formations, there’s an almost overwhelming number at your fingertips once battle starts.  The different forms under defense and offense will grant bonuses to your troops such as increased strength or speed.  Depending on the formation an enemy chooses different options become available such as squad or breach.  There isn’t any one formation that will assure victory every time and in fact choosing incorrectly can and will have disastrous results.  You can issue commands on the fly so long as you don’t choose melee, which turns your army into a free for all.

Perhaps Dragon Force’s greatest strength is its accessibility.  The game’s menus and presentation belie its depth. You start off with a small but capable force and the game eases you into its mechanics.  As your army grows in size it becomes much easier to send out smaller forces to seize new castles.  Not to say that the game is easy but unless your emperor is killed in battle you’ll never see the game over screen.  I mentioned that there isn’t a set strategy that you can use to win every battle but there is one or two that prove a bit too effective in 90% of the battles you’ll come across.  Towards the end of the game once you’ve conquered most of the known world it does feel a bit routine as you invade other lands but I’d prefer that to feeling like an underdog every time considering the military might I’ve built up.

And the replay value is completely off the charts!  Playing the game as a different member of the Dragon Force will give you a new perspective on certain events and in combination with their starting zone a somewhat different experience.  Once you’ve completed the game once the last two emperors become available and will change your views about the true nature of the “war” being raged in Legendra.  Exploring out of the way locations on the world map will yield hidden characters or items with some unique to each scenario.  While your first play through might take 15-20 hours based on the fact that you’ll need time to come to grips with the game’s numerous systems as well as constantly taking and defending strongholds each subsequent run will only take a third of that time.  When the game is this good its more than worth it and most of all fun to play it multiple times.

The Saturn was designed to be a 2d powerhouse and Dragon Force makes ample use of its power.  Watching as 200 mid-sized sprites clash is still impressive today without a hint of slowdown.  The spell effects are pleasing to the eye without being over the top.  There’s some pixelization going on in the backgrounds and sprites but considering the scale of the battles you won’t even care.  The cut scenes use high quality 2d art and there’s quite a bit of it illustrating the most important story bits.  Between the 8 characters that’s a lot of artwork.  The game also has an incredible and varied soundtrack but sparse voice work.

There’s no question in my mind that Dragon Force is one of the best strategy Rpgs ever released.  For the amount of depth the game offers it is accessible to nearly anyone with even a slight interest in the genre.  Unfortunately it’s hard to find as Working Designs no longer exists. The PS2 re-release never hit our shores so prepare to possibly pay a high amount to sample gaming greatness.  I don’t know what your pricing threshold is but I can guarantee Dragon Force is worth your while.