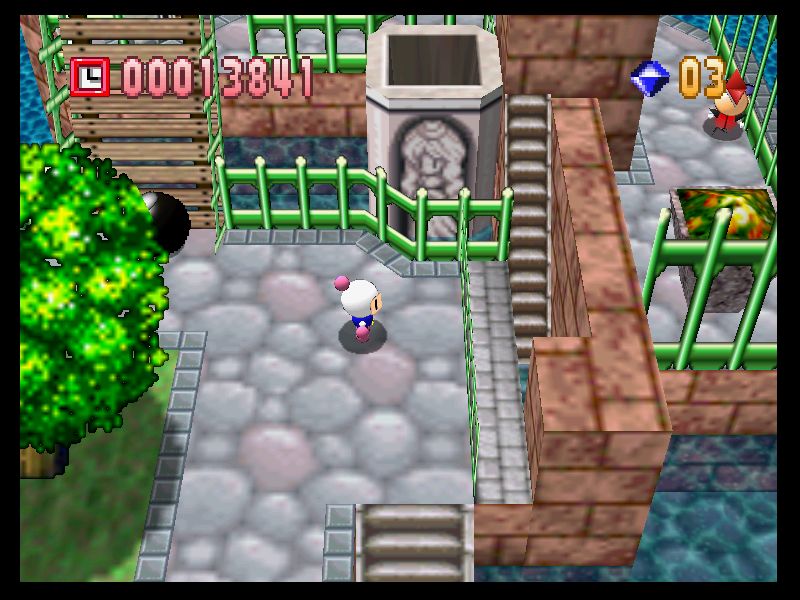 As much as we love Bomberman for its riotous multiplayer mode let’s be honest, the single player campaign has been tolerable at best.  Through five installments on the SNES and the awesome Bomberman ’93 on the Turbo Grafx-16 this has held true but the N64’s release provided an opportunity to put a new spin on its story mode.  Bomberman 64 brought new life to the series in both single and multiplayer and remains one of the best titles in the series long history.

Space pirates led by Altair have been stealing the life energy of planets throughout the galaxy using their secret weapon, the Omni Cube.  The pirates set their sights on the Planet Bomber, unaware that it has a defender in the form of Bomberman.  With the help of the mysterious Sirius Bomberman must destroy the barrier surrounding the pirate’s Black Fortress and stop their evil plans.

Rather than the simple arena based gameplay of prior games Bomberman 64 is a full on 3d adventure that spans multiple themed worlds.  The move to 3d has given the game a new lease on life and manages to combine your progress in the adventure mode with its multiplayer options.  While it suffers a bit in the transition to the third dimension the game still remains an enjoyable ride today.

Bomberman has been gifted with a set of new abilities needed to thoroughly explore each environment.  Standard bombs can be kicked and stopped at the touch of a button for pinpoint precision.  Bombs can be picked up and carried around for later use.  The biggie though is the ability to pump up bombs while carrying them for larger explosions which is necessary to destroy certain blocks and bridges.  For the more “advanced” players you can stack bombs to use as a bridge or ladder but mastering the intricacies of these techniques is hard.  The control is fluid and intuitive so all of these functions become second nature after a few minutes of play time.

The adventure mode is of sizable length, spanning 5 worlds divided into 4 stages each.  There are a ton of items to collect, some as power-ups and others that unlock a decent sized chunk of optional content.  There are items that will increase the number of bombs you can plant at once, the radius of their explosions (the mega bomb covers a sizable chunk of real estate when pumped up!) my personal favorite, remote detonating bombs.  These bombs are the key to truly reaching out of the places on each map and are just darn fun to use.

That’s a pretty sizable amount of powers and items, all of which play a factor in just how much of each level you’ll truly explore.  While each individual level isn’t necessarily large (they’re usually split up into multiple smaller vignettes) there are a ton of hidden items underneath nearly every block or tree.  Large parts of the environments can be destroyed, some you wouldn’t expect with the change in the level design also having an immediate impact on the proceedings.  There isn’t really a set time limit to the levels although if you are collecting the gold cards (more on that in a bit) you’ll need to finish within the targeted time.

Each individual level might not pose much of a challenge but the boss battles are a different proposition.  Each boss will test your pattern recognition abilities, especially Altair’s three lieutenants, Artemis, Orion, and Regulus.  These fights feel more like a multiplayer match although the AI can never hope to match a human opponent.  There are some inventive fights in the game such as the battle against the Dragon at the end of the Blue Resort or the spider in the Winter Island but these ranges wildly in terms of difficulty.

While Hudson has done an excellent job making a compelling single player experience it’s not without its share of problems.  Like most 3d games of that era the camera and viewing angle can be a problem.  You have full camera control which is necessary as there are many mandatory elements in each world hidden from plain view you’ll need to constantly futz with the camera to see.  It isn’t always immediately obvious where to go in each level which is half the fun I suppose but borders on frustrating when you’ve circled around the same smallish environment only to realize some block you couldn’t see was obscured by a ledge or other obstruction.  There are times where the camera will forcibly shift out of your control with no option to change it back.  The final boss battle of the Green Garden does this and it makes what would normally be a straightforward fight annoying since you can’t accurately judge the distance between you and your target.  Stage 3 of White Glacier has a section that is viewed from below and reverses your controls.  These moments are stupid and are blight on this otherwise enjoyable game.

For those seeking more out of the game the most important items are the Gold cards, of which there are 100.  Every level has five, some of which you’ll find by normally playing the game.  The most cleverly hidden cards will require you to perform some action, such as hitting a boss during a particular moment or completing each level within the targeted time. These are more than just fluff; they unlock the sixth world, the Rainbow Palace, which houses an additional 20.  Gathering all of these will unlock a significant number of new options in multiplayer, such as a ton of customizable costume pieces, new stages, and even cheat codes.  It never occurred to me before but it’s very much in the same vein as Super Mario 64, just not as involved.

Multiplayer has undergone just as many changes as the adventure mode.  The levels are multi-tiered and more spacious giving you more room to escape and more avenues of attack.  There is a wealth of options available aside from the choice of single or team battle, such as the option to play against CPU controlled opponents and adjusting many of the rules of each match.  Sudden Death will turn the arena into a kill zone if one minute is left on the clock.  Ghosts exist in a happy medium between cheap and outrageous.  A player controlled ghost can do everything except drop their own bombs and are a fun way for a defeated player to get a shot at revenge.  The power-ups introduced in the adventure mode are even more potent in the more confined space of multiplayer and are a good match for the changes this game introduced.

It does come across less like the Bomberman you remember and more like Poy Poy or Crash Bash but once you’ve adjusted its still just as fun.  I suppose those expecting the typical arena based shenanigans of the past will find it harder to adapt as Bomberman 64 goes for a different tact.  A lot of thought went into how 3d can affect the typical gameplay of the series and for the most part I feel it works although I wouldn’t rate it as highly as the later SNES installments.

Bomberman 64’s release was a bit of a surprise in 1997 but was a welcome addition to the sparse but growing N64 library.  While it isn’t perfect it manages to succeed admirably at injecting some much needed life into most aspects of the series and is still a strong title today.