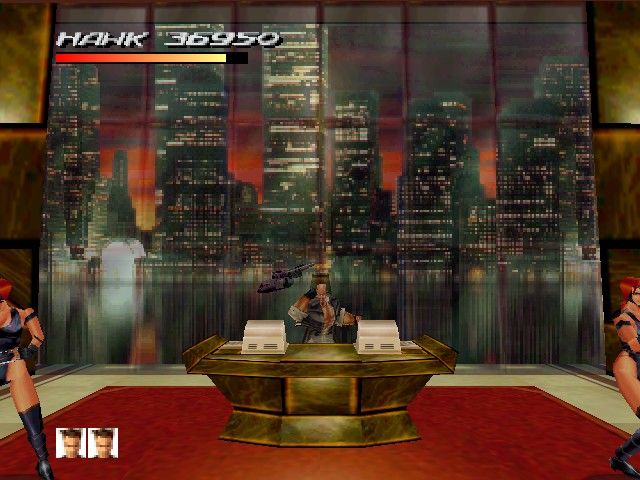 Coming of the success of Tomb Raider Core Design and Eidos could do no wrong.  Flush with Lara Croft money they began an aggressive marketing campaign for nearly all of their games supposedly based on “character” when in reality it was mostly tits and ass.  Badly shaped polygonal asses at that that; look up any of the old Deathtrap Dungeon ads to fleece your eyes.  With 3-d platformers under their belt they turned their eyes toward the side scrolling brawler, a genre that had yet to make the leap to 3d.  While Core were given the benefit of the doubt the final product sadly did not live up to expectations.

Dr. Zeng has devised a new drug and unleashed it on the streets, creating scores of new addicts in his bid for world domination.  Among the victims left in the wake of his drug spree are the family and friends of 4 individuals, Hawk Manson, Ben Smasher, Alana McKendricks, and Mace Daniels.

Originally conceived as a Streets of Rage sequel that deal fell through but work continued regardless.  A lot of promises were made prior to Fighting Force’s release.  There were grand plans to make the game a free roaming brawler, allowing you to wander around at your leisure with a deep fighting system in tow.  Somewhere along the way the enormity of their vision came crashing down, leaving us with a stripped down, repetitive beat em up with few redeeming qualities.

While all 4 characters have their differences in practice they are more or less the same.  All characters share the same basic move set and specialize in a particular area, such as jumping attacks or grappling but it’s largely irrelevant due to the control scheme.  While the PlayStation controller has multiple buttons Core decided to shove multiple functions into one button.  Backhand attacks and grappling both share the same button, resulting in many instances where you’ll attack the wrong guy rather than execute a body slam or pile driver as planned.  Movement is sluggish at best which affects the flow of combat since it never quite “feels” right.

The lack of a targeting option is also a concern; I honestly can’t see why it wasn’t added since you’ll almost always face 3-5 enemies at once.  Flailing around hoping that your attacks will at least hit someone in the near vicinity is incredibly stupid in a game focused so heavily on combat.  This was an issue with far too many games in that console generation but is especially egregious in the beat em up genre.  No matter how comfortable you become with the controls combat will never seem fluid.

All of those claims of a massive move set for each character were apparently abandoned as you are more or less armed with a basic series of kicks, punches, a jump kick, slide, and a few throws and that’s it.  Any gamer who has played Final Fight and its ilk know that these games live and die by their combat system and the repetition inherit in the genre.  Fighting Force does nothing to fix those problems and quickly becomes boring as a result.

The brain dead enemy AI doesn’t either.  Most “levels” if you can call them that consist of smaller arenas that task you with defeating all of the enemies before being whisked away to the next one.  The repetitive enemies all share the same basic beat em up tactic of boxing you in and letting loose. Fighting 5 or 6 enemies at once loses its luster when 3 of them hang back and wait their turn.  The camera doesn’t do the combat any favors since you can’t rotate it as you like.  The forced angles make avoiding attacks when a car or pole block your view frustrating.  Even worse, enemies with guns will frequently attack off camera, never a good idea.

The one bright spot would be the level of interactivity.  Despite their small size the environments are highly interactive and destructible.  Most objects can be smashed and used as a weapon, such as guard rails or objects on the ground.  It’s satisfying to destroy an ATM or van and use the hood as a projectile.  At the very least while you are confined to small areas it’s incredibly satisfying to use the environment to your advantage.  It offers a glimpse of what the game could have been had they tempered their ambition enough to bring their original vision to life.

The N64 port came two years after the PlayStation version and is more or less the same in terms of content.  The slowdown that plagued the two-player coop is gone and the lighting has been improved but otherwise the look of the games are similar.  Most importantly the long load times are a thing of the past which at least makes things speedier, not that it makes the game any better.

The potential was there but Core Design didn’t follow through.  Fighting Force had everything going for it in terms of press attention but that might have doomed it in the end.  Under close scrutiny Fighting Force fails to live up to the hype.