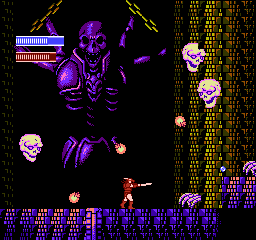 There’s obscure and then there’s the really obscure.  In all of my younger years when I would voraciously devour any and all information about video games I could find I never saw a single review of this game, let alone a preview.  Even on the internet, the home of lost and forgotten games that at least one person loves you’ll never see anyone mention Dragon Fighter.   How is it that this game has flown so far under the radar?  I could see it if it were some unlicensed Wisdom Tree crap but Dragon Fighter is an above average action game that can compete with some of the NES’s very best in presentation and is only let down by its artificial difficulty.

The evil warlock named Zabbaong has attacked the land of Baljing with his army of monsters, leaving the country in ruins.  The Dragon Spirit, guardian of the Baljing people breathes life into the statue of a legendary warrior to seek revenge for the citizens.

Dragon Fighter is basically a hybrid platformer and shooter, as strange as that combination sounds.  As the title character you are only armed with a sword as you fight all manner of beasts on the way to Zabbaong’s lair.  The sword is adequate but can be charged for a more powerful attack.  You’ll have to rely on the charge attack heavily as power-ups are relatively sparse.  The charge attack can be modified by collecting three power-ups that will also change the color of your armor red, blue, or green.  Aside from health pickups and a ring that clears the screen you won’t see these too often.

The dragon in the title is also your ace in the hole for the times when things get a little too tough and trust me they will.  Defeating enemies will slowly fill the metamorphosis gauge and once it reaches a certain point you can change form at which point the game morphs into a pseudo shooter.  The screen auto scrolls as you can now dart around the screen and light up enemies with your fire breath.  The gauge slowly ticks down and functions as a life bar of sorts although you can switch back if needed.  Of course every massive power-up needs a drawback and in this case you can’t turn around and will always face forward which is a bigger handicap than you would expect in this game.  The final level is a shooter level that scrolls way too fast for its own good but compared to the rest of the game is pretty easy to deal with.

Outside of your weapons (or lack thereof) Dragon Fighter is very similar to Ninja Gaiden or more specifically Shadow of the Ninja which makes sense since both games were created by Natsume.  You won’t find any of the heavy platforming of those games here but the same level of deft enemy placement and relentless attack.  Seriously, the enemies literally fling themselves at you with reckless abandon and it never lets up.  It can definitely feel a bit overwhelming since the attacks never stop even if you are standing still.  I suppose the reasoning behind littering each level with so many enemies is so you can charge the dragon gauge but it gets overbearing quickly.

It also doesn’t help that the game is ridiculously hard.  Imagine if every level of Castlevania had medusa heads that spawned on an endless loop.  Doesn’t seem the slightest bit fun does it?  Even Konami knew when to dial it back, reserving those moments for specific areas.  Dragon Fighter shows no such restraint with every level featuring some manner of flying monster to contend with every few seconds.   You can’t control the angle of your attack so it’s left to chance as to whether or not you’ll actually hit them when you swing.  Because items are so scarce you have to extremely careful lest you die needlessly, which in this particular game carries an extra air of failure.

You only have one life and 3 continues to complete the game which is beyond retarded.  The game is only six levels long but due to the constant onslaught of enemies I doubt anyone will be able to complete even the first level on their first try.  Adding to the list the designers weren’t even courteous enough to refill your life bar completely between levels; combine that with the infrequent power-ups and it isn’t outside the realm of possibility that you’ll reach the final level with no continues and half a life bar. If it weren’t for the bad balancing issues Dragon Fighter would be an exceptional game as it has pretty good graphics and an excellent soundtrack.  It’s just a damn shame that the difficulty does its Sunday best to keep you from enjoying it.

While I’ve harped on the game’s high challenge it doesn’t make Dragon Fighter a bad game.  There are plenty of other NES games that are just as hard  due to artificial constraints such as Double Dragon 2 and Blaster Master.  That doesn’t excuse its mistakes but it does drag down its overall quality.