Legacy of the Wizard NES

Legacy of the Wizard NES Game Cartridge
Legacy of the Wizard was released for the NES in 1989 and was developed by Nihon Falcom and originally released as Dragon Slayer IV: Drasle Family for MSX and MSX 2 in Japan in 1987 being later released for the Famicon by the company Compile. It was an installment in the Dragon Slayer series from Falcom. It was also one of the few Dragon Slayer video games that were released outside of Japan.&nbsp;
The games is the story of a family called the Drasle’s, which is abbreviated from Dragon Slayer. The family was called the Worzen family in the United States. They were attempting to kill Keela, the ancient dragon magically trapped inside a painting that is in a labyrinth underground. To be able to kill the destroy the dragon, they need to find the magical sword Dragon Slayer, with four crowns protecting it. Each unique ability that the family members possess will need to be used to retake the crowns and kill Keela. The story of the game is explained practically in whole in the instruction manual, like most other games during this era. The game also does not contain much text, adding very little to the story to explain the plot of the game.
The player will control the members of the family and the pet to search for four crowns, periodically going back to the house to change their characters and to get a password. The characters will be sent out individually to the underground cavern that is full of monsters, puzzles, and traps. Each family member has their own weaknesses and strengths. Some will have powerful strengths but will be offset with a very weak limitation. The player will need to discover each of the character’s strengths and utilize them for the best situations. Four bosses will need to be defeated to get the crowns while playing through the dungeon.
The are seven character in the game excluding the dragon. Xemn is the head of household and a woodcutter in the Drasle family. His attack power is the highest of all playable characters and the only one that can use magical gloves for moving special types of blocks in a dungeon. Xemn’s wife is Mayna, who’s attack power is stronger than the children’s but not as strong as Xemn. She is used for the crossbow, magical key, and magical wings. Their son is Roas and the only character who has the ability to use the crowns and find Dragon Slayer, and also the only character that can wiled the sword. His attack power is low but needs to be used to wield the sword to defeat the the dragon Keela. Lyll is the sister of Roas and Xemn and Mayna’s daughter. She has the highest jumping ability and the only character that can use a mattock to break the special blocks inside the dungeon. Her attack power is the same as Roas’s.&nbsp;
There are also a few side characters. Pochi is the pet that acts similar to a dog but actually is a monster that is from the dungeon. It has powerful attacks but has limited range and can’t jump very high. It is also limited on using magical items. The best feature of this character is the immunity from monsters inside the dungeon, not harming Pochi. It can also stand on a monster and use them as a stepping stone to reach certain places it normally could not go because of its bad jumping ability. Jiela is Roas and Lyll’s grandmother. She is not a character to play as but appears on screen when selecting a character. She is only used to give the player a password to continue their game. Douel is Roas and Lyll’s grandfather. He was the powerful wizard that trapped the dragon Keela in the painting a long time ago. He also is not a selectable character but is used for the player to give a password to and let them continue their game.
The dungeon in the game has five main sections. Four of &nbsp;the five sections will have a boss guarding a crown while the fifth will have the last boss. Every section will have a different layout and different music. Each section was also designed to suit certain characters for each. The crowns will need to be acquired with the player using the specific skill sets for the characters to get by sections in the dungeon. Because of this, every character that can be played will be needed to finish the game. An example is a section might be blocked by bricks that need the mattock to be used to destroy them. When the four crowns are collected, the son of Xemn, Roas, will need to use them to obtain the Dragon Slayer sword and use it to destroy the dragon Keela.
Monsters in the game will be infinite when roaming through the dungeon. Every character has the ability of firing shots to kill monsters but will used up magic power. Most monsters will drop an item when destroyed like keys for opening doors and chests. Other items that are dropped are bread which is for refilling the health of the player, potions for refilling magic, and poison that can harm the character. Money will sometimes drop that can be used at inns and shops in the dungeon. Magical items will need to be used by the characters while going through the dungeon. They can be bought at shops or found in chests. These magic items can restore magic or health, boost range or attack, or have environmental effects such as giving the player the ability to move certain bricks or fly. Specific items can only be used by specific characters, with those items needed to complete goals of the game.
UPC: 0-47956-14440-2
Platform: NES
Players: 1
Condition: Used
Genre: RPG
Region: NTSC (North America)
Rating: Everyone 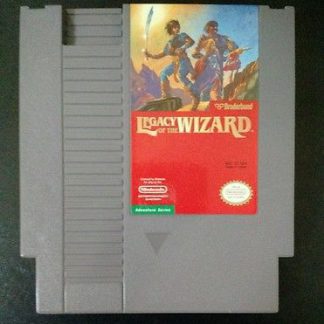