Hook NES Game Cartridge
Hook was released for the NES in 1992, alongside three other versions of the game released the same year for other gaming consoles. This version was published by Ocean and is a platformer game, which is different than Sony/Ukiyotei’s version for the SNES. It is based off of the movie Hook that was released in 1991.
Each level can be chosen in Neverland with a pointer from your map. Caves, icy landscapes, forests, lagoons, and towns are the landscaping layouts. The levels you finish first will open different paths in the game, though all the levels will need to be completed before you can fight Hook. Tinker Bell will give you the goals as well as advice before you start a level. Each level’s main goal is to collect items such as cherries or coins. Some levels will be special items like a tooth. The exit will open once items have been acquired. There are enemies that will be in Peter’s way to the exit, such as pirates, dragons, etc, which depends on the level chosen. Your character Peter will wield a sword to fend off the enemies. Thimbles can be picked up and when enough is accumulated, Tinker Bell starts next to him, and you can use her to attack. Marbles collected will give Peter the ability to float and reach places out of reach normally. Health can also be refilled by getting food.
There are underwater levels where Tinker Bell can’t help and you have to swim, making it harder to move around. The player can use Anvils to sink faster and the only way to refill your health is by swimming to the top for air. During flying levels, the view is from behind Peter Pan. Marbles will be sent up by the Lost Boys to get to keep flying, while Hook’s pirates will send balloons that have dynamite which will need to be dodged, as well as storm clouds. The fights encountered are first against Rufio, who gives you a magic sword once defeated, and the other being Hook himself. During the fight with Hook, Smee will be sent out to immobilize Peter temporarily with a ball and chain.
UPC: 0-90451-10601-7
Platform: NES
Players: 1
Condition: Used
Genre: Platformer
Region: NTSC (North America)
Rating: Everyone 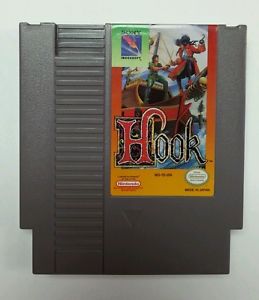