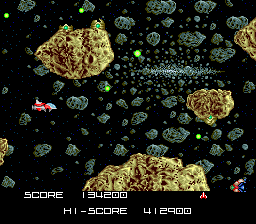 When you examine the differences between the many Genesis shooters and the few that were released for the SNES it basically boils down to two fundamental schools of design.  You have your fast action twitch shooters versus a slower, more measured pace.   Compare Gradius III to Thunderforce 3 or U.N. Squadron to Gaiares.  That’s not to say each system didn’t have their fair share of both of course but the fact is the slow paced variety took a load off the slow SNES CPU.  Blazeon falls in the second category but takes it to the literal extreme but whether or not that’s a good thing is up to you.

Unlike most standard shooters Blazeon’s ship is really a piece of crap considering you’re about to take on an alien armada alone.  Only equipped with a rapid fire laser for offense there are no additional power-ups to collect meaning you’re fucked.  At least you would be if not for the Tranquilander (where the hell did they come up with that?).  This piece of equipment will wear down an enemy’s defenses and leave them pacified for you to take over.

In total there are 7 enemies that can be captured this way, with at least 3 appearing on each level.  Each commandable cyborg has different strengths and weaknesses, such as the Mars cyborgs 3-way shot leaving gaps that can be exploited.  The Shadow blade is the fastest ship and can turn invisible for a few seconds but its speed is nearly uncontrollable.  The Grain Beat is equipped with two dual lasers that can be repositioned for maximum effect.  Commandeering one of these cyborgs is of the utmost importance not only because you’re a gimp otherwise but because they also function as extra armor, taking a few hits to destroy.

The added firepower does have its drawbacks.  With the exception of the Shadow Blade each mech taken makes you a giant target with little room to move.  This isn’t a bullet hell shooter but it has its occasional moments and in most cases you aren’t leaving unscathed.   If you’ve chosen a mech you don’t like you’re basically stuck unless you purposefully have it destroyed if you want to switch, a risky ploy.  You’ll also have to exercise caution when preparing to take over a cyborg as its possible to damage them beforehand.

Odd weapon quirks aside Blazeon’s biggest issue is its pacing; this is one of the most agonizingly slow shooters I’ve ever played.  And that isn’t because of the SNES, the entire game just seems as though the designers were bored and wanted to complete it as fast as possible.  Enemies are few in number with large gaps in between waves of enemies.  There’s an almost 1 minute space of dead air prior to each boss that is simply inexcusable.

You almost have to come up with your own challenges to make the game more exciting.  There is one incentive to defeating each boss as fast as possible; there’s a timer that ticks down during each boss battle, with any extra seconds left counting as a bonus once the level is complete.  It’s easy to build up extra lives by excelling at the game and with unlimited continues this is far from the hardest shmup on the market.

The presentation is mediocre overall.  The art design is R-Type influenced and there are more than a few elements that skew a little too closely to Irem’s classic such as the flying fortress style assault which is made even worse if you are in an oversized cyborg; these damn robots weren’t made for navigating tight spaces.  The SNES version is missing the arcade game’s intro and some animation but worst of all the game doesn’t have a damn ending, it simply loops back to the first stage.  I’m struggling to think of something positive to say, uh, at least he music is good.

Blazeon simply hasn’t held up over the years, hell it was never a good game to begin with.  There are much better shooters out there that share the same weapon stealing mechanic such as Gaiares and Eliminate Down; its better to play those and pretend Blazeon doesn’t exist, I know I have.