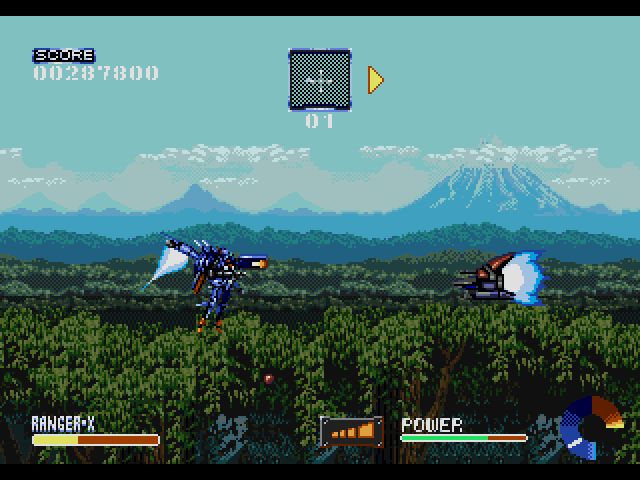 I wonder how many are aware how badly Sega of Japan was trounced overseas during the 16-bit era.  While the Genesis fought neck and neck with the SNES in America in Japan it was a distant third.  While most of the most popular third parties would eventually develop for the system due to its status in the US, the situation forced Sega to create partnerships with smaller, lesser known developers to create exclusive games.  This resulted in many fantastic, genre defining games that sadly went unnoticed due to bad advertising (or a lack thereof).  One such case was Ranger-X, a phenomenal side scrolling action game with more creativity than the majority of its competition combined.

The Homeworld has been invaded by a legion of Edgezone terrorist, who unleash a series of plagues and mechanical creatures on the populace. Outfitted in the high tech Ranger-X mech suit it falls on your shoulders to clear each area and save Homeworld.

Where did Ranger-X come from?  Like Gunstar Heroes it seemed to come completely out of left field from an unknown developer.  No one had heard of Gau Entertainment but those of us fortunate enough to Ranger-X would certainly keep an eye out for their future works.  Despite the game’s quality Sega of America were too busy promoting their terrible FMV Sega CD lineup in 1993 so it flew under the radar with other 16-bit legends such as Shinobi III and Gunstar Heroes.

Although it has the styling’s of a typical side-scroller Ranger-X is anything but.  The path to the end of each level is rarely a straight line and in most cases there are primary targets that need to be eliminated in the order of your choosing.  In many ways its similar to the Assault Suit series of games, with the same mind numbing difficulty and all.

There’s a wealth of play mechanics that are fully explored within the confines of the games’ 7 levels.  The default control scheme might take some getting used to; you can fire in both directions but need to press a button to change the direction you’re facing.  The suit is equipped with a jet pack for flying and hovering but will gradually overheat with continued use, necessitating a brief stop on solid ground to recharge.

Perhaps the greatest tool in your arsenal is the two armored vehicles that assist you in each level.  The Ex-Up Indra is a motorcycle that your suit can combine with to form one unit that has a mix of the pair’s abilities, such as long jumping and homing fire.  As a bonus those with six button controllers can control Indra using the X and Z buttons independently.  The Ex-Up Eos is a mobile aircraft carrier that only appears in a few levels but aside from docking to switch weapons is useless.  It randomly fires lasers at moving targets but with no way to directly control it is more of an afterthought.

In combination with the Ex units the levels have a wide range of gameplay variety.  Almost every mission seems as though it were designed to highlight some aspect of the gameplay and does so brilliantly.  Mission 4 is a vertical ascent outside a high rise building, forcing you to manage your thrusters to avoid dropping to the beginning of the level consistently.  There are convenient floating platforms to recharge when needed but between the constant barrage of enemy mechs and the need to stay on the move (it’s a long, slow climb to the top!) it tests your resolve.

Missions 2 and 3 will challenge you to pay attention to recharging your weapons lest you end up with no means of offense.  All weapons recharge in light, with mission 2’s underground cavern providing numerous sun shafts to those who closely examine the level layout.  As an added bonus the light will also destroy weaker enemies with enough contact.  Mission 3 takes place both in the sky and on the ground.  Your targets all reside in the forest but the dense trees prevent sunlight from reaching you, forcing a retreat to the Eos to recharge.

When taken as a whole Ranger X is more difficult than most are probably used to.  Even on Easy the attacks rarely stop and life restoring recharge stations are only available on a few stages.  With limited continues you won’t finish this in one evening.  While the controls eventually become intuitive it takes time to get to that point.  I feel the game’s overall quality trumps the more advanced difficulty but some might feel otherwise.

You can complain the game is too hard but absolutely no one can whine about the presentation.  Ranger X stretches the boundaries of what you think the Genesis is capable of and is one of the most technically impressive games for the system.  Every level opens with a wire frame model of the map that simulates polygons pretty effectively.  Through smart use of the Genesis’s limited color palette the game has a level of vibrancy that is nearly unmatched by any other game on the platform.  The line scrolling effect used on the floors in Street Fighter 2 has been applied to some of the backgrounds, giving them a warping sense of 3d depth I can barely describe.  All of this technical tomfoolery would mean nothing without good art and Ranger X is no slouch in that department as well, especially the bosses.  Any way you look at it this is the complete package visually.

Outside of the high challenge there is no reason any fan of action games should pass up Ranger X.  With its varied gameplay, exceptional graphics, and decently lengthy quest there are few action games for the Genesis that meet its level of quality.  While Sega’s lack of promotion meant it went unnoticed by the general populace now is the time to unearth this lost classic.