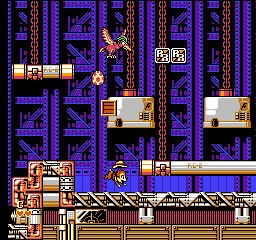 By 1993 the writing was on the wall and it was time for the NES to walk off into the sunset with its head held high.  Nintendo graced the system with one of its finest games, Kirby’s Adventure the Christmas and publisher support had all but dried up, to the point where Capcom would pass on publishing duties of Mega Man 6 to Nintendo themselves.  Oddly enough they would release Chip & Dale: Rescue Rangers 2 themselves in 1994.  We’ll never know what could have been if the game had been released on the SNES but as a last swan song for the NES Rescue Rangers 2 was a good enough reason to pull out the old grey box one last time.

The Rescue Rangers catch wind of a bomb set to go off at a restaurant and provide their assistance, unaware that it is only a distraction to cover Fat Cat’s escape from jail.  The portly feline used the ruckus to steal the Urn of the Pharaoh and now the Rangers have to recover the priceless artifact and foil his evil scheme.

While it never reached the level of Duck Tales the original Rescue Rangers was an enjoyable platformer, especially in coop mode.  The juxtaposition of miniature chipmunks in this oversized world worked really well in creating unique platforming segments out of everyday situations, something not many games had done well to that point.  The game might have been on the easy side to accommodate two players but it was a fun ride while it lasted.

The point of all of that information is simple; Rescue Rangers 2 is more of the same.  The basic gameplay is identical: as either Chip or Dale your main weapon (actually only weapon this time around) are the numerous boxes strewn about that can be thrown or used for cover in a pinch.  The only new addition this time around is the ability to chuck your coop partner in lieu of a weapon.

The levels sadly cover a lot of familiar territory Capcom had already explored in their other Disney efforts.  The Haunted mansion wouldn’t look out of place in Adventures in the Magic Kingdom while the sewers came straight from Darkwing Duck.  To an extent you can’t fault them for that since the show sort of took place in the real world but there is an endless list of locales they could have used rather than going for the platforming staples.  The level design has also seen a shift as there are less environmental hazards created from everyday objects and more bottomless pits.  There are usually one or two tricky spots in each level but nothing that will have you pulling your hair out.  There are a few decent distractions along the way such as escaping from the refrigerator in 3 minutes or controlling a mine cart in the Western world but they’ll only cause you to wonder why the rest of the game lacks the same sort of inspired design.

The multiple routes to the end level are gone in favor of a linear level progression.  Its only at the Amusement Park that you’ll have a choice of what order you’ll tackle the game’s final 3 levels.  This is a huge blow to the game’s replay value; it was nice to have options if a particular level happened to give you a spot of trouble and also a reason to go back and play the game again once you’d finished it the first time.  Now once you’ve beaten Fat Cat there’s no incentive to ever do it again.

A major point of contention with the first game was the boss battles which were so easy it was insulting.  They’ve seen a considerable upgrade here.  Their patterns of attack aren’t always obvious and you’ll have to take slight risks to create opportunities of attack; an example would be the second boss, a flying cat who throws spiked balls at your last position.  If you keep your distance you’ll never be able to pick them up and use them against him.   There are a few that fall flat; the first boss will self-destruct if you keep your distance long enough and the third boss is a complete. This auto scrolling battle can be totally cheesed by staying above him at all times since he can’t throw his fireballs upwards.  On the whole however they are a mile away from the simple ball throwing wastes of time in the first game.

Rescue Rangers 2 isn’t a bad game but it is the very definition of a cheap cash in.  The fact that the game came years after the show had completed its run further highlights how little thought went into its creation.  I suppose those who really like cooperative multiplayer would have a good time but the Magical Quest series of games starring Mickey Mouse does a much better job of scratching that itch.