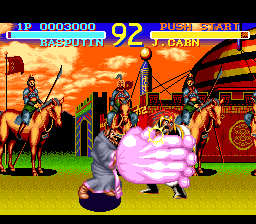 At some point SNK fell completely head over heels with fighting games.  Seriously, if fighting games were your favorite genre you needed a Neo Geo, as much as 50-60% of its library is comprised of just that.  Had the Neo Geo been reasonably priced (you think the PS3 was bad?   Try $600 dollars back in 1989 when the majority of the gaming audience was still barely teenagers) I don’t doubt for a second that it would have made a bigger splash in the market simply based on how insane the fighting game craze became in the 90s.  With so many of these games being cranked out of their factory SNK had to be pretty creative in making each one stand out and one of their better attempts came in the form of World Heroes.

While World Heroes borrows a lot from Street Fighter it at least has an original premise.  A scientist named Doc Brown has created a time machine and organizes a tournament of the 8 greatest fighters in history to see who was the strongest of all time.  How’s that for a plot?  Yeah I know, there are plenty more interesting things you can do with a time machine but as far as fighting games are concerned World Heroes at least tried to be different.

Most of the 8 fighters are based on or associated real world and fictional characters.  Hanzo and Fuma are based on real ninjas who were at odds with one another and play a similar role in the game.  Rasputin is based on Grigori Rasputin, an alleged mystic from the 19th century; it is this aspect of the character that is drawn upon for his video game counterpart.  Janne is inspired by Joan of Arc.  Muscle Power…….is Hulk Hogan.  Any of you kids not familiar with Hulk Hogan and his real American phase go look it up on YouTube.  Kim Dragon is the stereotypical Bruce Lee clone nearly every fighting game has to includ as a prerequisite.

While the characters were actually interesting individuals based on their historical back stories gameplay wise each is virtual carbon copy of someone on the Street Fighter roster.  Dragon is quick on his feet and has similar moves to Fei Long, although he was created first.  Muscle Power has similar special moves to Zangief and Hanzo and Fuma fulfill the Ryu/Ken roles to a tee.  Brocken is a mix of Blanka, M.Bison, and Dhalsim.  The few who don’t follow a well-worn mold such as Janne and Rasputin present a bit of a challenge to utilize efficiently since their move priorities are different.

World Heroes control scheme was simplified in many ways.  There is only one punch and kick button, with a third for throws.  The buttons were pressure sensitive to give you control over when you launch a weak or strong attack.  Personally I found it stupid as the Neo Geo arcade units had 4 buttons, leaving one button useless.  Many special moves are simple back, forward + A or B combinations, taking advantage of the simple controls.  For the most part though if you’ve played Street Fighter or any similar game you can jump right in with the skills you’ve honed.

Although World Heroes is derivative it does have one unique feature: Death Match.  Choosing Death Match will replace the typical fighting arenas in each country with a wrestling ring filled with different hazards you have to avoid while facing your opponent.  As a bonus you can force your enemy into these same hazards for extra damage.   These take many forms, from simple oil puddles that cause you to slide, to spiked walls or electrified ropes.  It was an interesting addition and one that made 2-player versus matches even more fun.

The SNES version is simply put terrible.  While it mimics the looks of the MVS unit pretty well it’s missing some of the voice samples as well as some background detail.  It wasn’t exactly a stunner compared to Art of Fighting or Fatal Fury 2 but World Heroes was easy on the eyes and ears, and sadly the SNES port loses some of that.  But the biggest flaw is the game’s lethargic pace.  The entire game seems as though it’s moving through molasses and it throws off the “feel” of the game.  I also found the special move prompts to have spotty recognition; for a genre that lives or dies by its responsiveness this is the kiss of death.

The Genesis rendition, licensed and reprogrammed by Sega, wins by virtue of the fact that it ‘s closer the arcade game’s speed.  Everything feels right and the game moves at a brisk pace.  As a bonus, for those that have a six button controller the game will automatically switch the controls so that light and hard attacks have their own individual buttons.  You could also do this in the Nintendo version but it was nice to see the six button pad supported.  Sadly the Genesis version is even worse than the SNES game when it comes to production values.  I will give Sega credit for trying but the 64 color limit really hurts the graphics.  Nearly all of the voice acting from the arcade is missing and don’t get me started on the sound effects and music.  Special Champion Edition sounds like a symphony compared to this.

So there you have it.  Both ports suffer from their share of problems and although there is a clear victor it doesn’t mean much.  World Heroes was only slightly above average to begin with; take two ports that both don’t even match that subpar standard and you have a bad game that shouldn’t be bothered with.