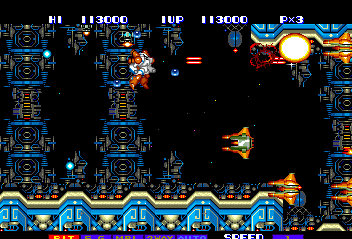 Being a Turbo Grafx-16 owner was a lonely existence, speaking from personal experience.  I knew only two people that actually owned one, meaning whenever I had finished the games I owned I was screwed, first because I was too young for a job and two because there wasn’t anyone to trade games with.  After completing Keith Courage for the umpteenth time I feared I would develop the courage to jam a spike in my brain before a loose $20 bill bought me Side Arms.

The Bozon Empire have decide to launch a full scale assault on the Earth, with the planet’s only defenders consisting of Lt. Henry and Sgt. Sanders, who don Mobile suits to defend the planet.  Ignore the terrible box art, someone in the marketing department decided to have a little fun with the game’s cover art as it comes from the same school of art that brought us the Mega Man box.

Originally released in the arcades in 1986 Side Arms bears a few similarities with Capcom’s other notable release Section Z.  Both games allow you to shoot left and right using the face buttons but where Section Z is more of a shooter/Metroid hybrid Side Arms is all shmup.  While it’s missing the two-player coop from the arcade there’s more than enough action involved to occupy 3 gamers.

There are five primary weapons available in the game and as an added bonus this home port allows you to switch between them Gradius style but only while the game is paused.   The shotgun fans out in every direction while the three-way shot is more focused in one direction.  The optional bits will follow your ship and supplement your primary fire. There’s a laser that lets off a long blast that can easily decimate a boss’s life bar but you’ll have to survive long enough in between shots for effectiveness.  Each weapon can be upgraded up to 3 times and there are enough weapon pods in the early levels that you’ll have a fully maxed out set of armaments quickly.

There are a few additional weapons hidden pretty well throughout the levels that can tip the odds in your favor.  Speed ups are pretty much mandatory and some well-meaning designer added a speed down if you’re too stupid to know when enough is enough.  The most devastating is the α item that calls out another ship that will combine with your to create a mech that will fire in all eight directions in addition to whatever weapon you have equipped.   It also acts as a shield that willll protect you from one hit.  Something that powerful will always have a drawback and in this case the mech makes for a bigger target, with stray bullets even more dangerous than before.  If you find it hold on to it as long as possible since you’ll need every advantage you can get.

This is not an easy game.  At 9 nine levels long you only have two continues to save the Earth, a paltry number that at times seems insufficient.  Despite your seemingly overwhelmingly firepower it never seems to be enough.  The levels are designed in such a way that the terrain plays as much a factor in whether you’ll dodge those bullets or not.  Though primarily a horizontal shooter there are vertical elements in the game and enemies will approach from every angle.  There’s an R-Type like element in that there are times you’ll be so focused on avoiding a space worm that losing sight of your environment will lead to a cheap death.  Although you respawn in the same place you lose all weapons collected.  For a game this tough getting back up to speed is a tall order.

The presentation in Side Arms is overall average.  Treasure the cityscape of the first level as its probably the only interesting background element you’ll see during the entire experience.  The “theme” of each level changes but you’ll be staring at a generic set of stars for the length of the game.  There are only 3 bosses with 2 of them recycled multiple times so you don’t even have that to look forward to.  It’s funny, I played through Side Arms on a black and white TV back in the day but looking back I really didn’t miss much.  The music is decent but nothing you’ll remember after turning it off.

Side Arms is a decent shooter but on a console inundated with excellent representations of the genre that doesn’t cut it.  Only true fans of the arcade game need apply.