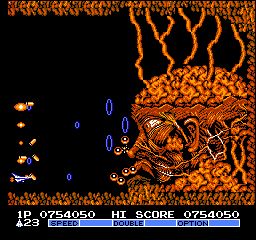 I know what you’re thinking, “isn’t Life Force Gradius 2”?  And the answer is no.  While the two series share similarities Life Force is actually a part of the Salamander series.  The real Gradius II never saw a release in the US in the arcade or on consoles.  As to why I sure as hell don’t know; Gradius was released in that early period in the NES’s life where there really wasn’t much available and was fairly popular as well.  Gradius II is a far superior game in every single way and outside of the slowdown is one of the best shooters available for the system.

The elaborate power-up system of the original has returned but has seen a massive upgrade in every possible way.  Many of the series tenets were laid down here and further expanded on in subsequent games such as the Power-Up menu.  At the start you are presented with a choice of 4 different weapon configurations.  It isn’t the outright weapons bonanza that Gradius III would later bring to the table but the customization is welcome.  Not everyone will want to tackle the game in the same manner and now you have some say in the matter.  In addition you can switch when you continue if a particular weapon set doesn’t strike your fancy.

Honestly they’re not so different; the only changes are in the type of missiles, double shot, and laser available although that might be doing it a disservice.  Missiles especially play a large factor in whether or not you’ll have to risk getting in close to cover an area that they won’t reach.  Photon Torpedoes are powerful but only hit the ground, not the area above you.  The different double shots I can’t comment on since I never bother with that shit, they’re too weak compared to the lasers and a bit of fancy flying is more convenient than a weapon dedicated to covering your tail that isn’t optimal.

If you thought two options were enough now you can have up to 4, which is totally insane.  With 4 options you can cover nearly half of the screen although it brings some performance issues along with it (to your benefit if you want to exploit it!).  As a bonus if you select another option once you’ve hit the maximum they become a rotating shield for a brief period.  Granted the two shield available do an admirable job protecting you as is but every little bit helps as this is one tough nut to crack.

Right off the bat its apparent Gradius II is in a totally separate class altogether from the original.  The first level has you navigating around fiery suns that spawn dragons before giving way to massive solar flares a la Life Force.  The requisite Moai level takes a sinister turn at the halfway point when the Easter Island statues turn red and not only double their rate of fire but turn around for one last shot at you.  The speed zone of level six forces you to gather more speed-ups than you’re comfortable with in order to stand a sliver of a chance at navigating the increasingly speedier corridors.

It’s amazing just how much of Gradius II’s content was recycled in its third installment.  Take the sand dragons in Gradius III’s first level.  Give them a red aura and you have the dragons in Gradius II.  Replace the breakable crystals of stage 3 with Bubbles and you have the bubble zone of Gradius III.  Both games share near identical speed zones Moai stages and even have similar boss rushes.  Of course none of us were aware of any of this but it’s insane just how much was lifted wholesale from Gradius II.

Speaking of bosses you won’t fight the same mother ship at the end of every level this time around and for that I say thank god.  Gradius II is armed with a suite of unique bosses at the end of every level, some more difficult than others.  There’s even a boss rush toward the end of the game featuring nearly every boss from Gradius and Life Force which is trippy.  The final boss although excellent in design is disappointing to face but I suppose it’s a nice respite from the brutal journey to reach him.

Aside from the boss fights few will see the end of this game in reasonable span of time due to the challenge.  Konami show little restraint in chucking every possible damn enemy in your path.  There are mid-level checkpoints but if it comes down to that you might as well start over, you ain’t making any progress with the standard pea shooter.  For those to weak sauce to persevere in the face of overwhelming odds there is a 30 man cheat code but it’s entirely possible that it won’t be enough.

Insanely pretty but the game’s performance suffers as a result.

While Gradius II is on a different level technically compared to the first game it suffers heavily due to slowdown.  Once you have 4 options and lasers anytime you press the fire button the game will slow to a crawl.  Seriously, give it a try.  You can use this to your benefit to escape some tricky situations since you can initiate it on your own.  I guess it’s an unintended advantage but you know what?  Every little bit helps.

I suppose Konami felt Life Force had the shooter market covered in the US and didn’t see any reason to release Gradius II.  We’ll never know but it doesn’t change the fact that we missed out on a really great game.