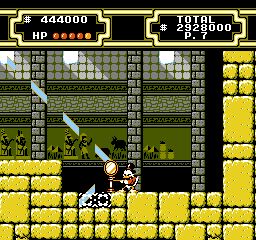 I don’t envy the development team at Capcom who were tasked with creating a sequel to DuckTales.  The original was a huge international success and is universally voted as one of the greatest games of all time.  Following up that level of acclaim would be a tall order for anyone and it would be pointless to try and reinvent the wheel so to speak in crafting a sequel.  DuckTales 2 instead further refines the already stellar gameplay laid down by its predecessor and is a worthy follow-up that few were probably able to experience due to its late release.  I wonder why Capcom decided to wait nearly four years to create and release this sequel when the NES market had all but dried up.

Huey has found a piece of a map left by Fergus McDuck (Scrooge’s father for those that don’t know).  With the promise of hidden treasure Scrooge sets out on a worldwide hunt for the missing pieces and to beat his rival Flintheart Glomgold to the goods.

Rather than innovation DuckTales 2 goes for renovation.  The original DuckTales was already near perfect as is so instead the game builds on what that game had already established.  The cane is still your all-purpose tool and weapon with all of the same functions returning.  You can still pogo jump, smack blocks around and function as a golf club of sorts.  The controls have been simplified a bit; you no longer need to play finger gymnastics to execute repeated pogo jumps, simply holding B does the trick.  There’ s still the minor issue of positioning to deal with in that if you land close to the edge of a platform  your pogoing will come to a dead stop but it’s not that big of a deal.

A few new features have been added that really open up the level of exploration in each stage.  Latching onto hooks makes traversing large gaping pits easier than ever.  The cane can now drag objects behind; if you remember you had no choice but to send blocks flying if they were in your path.  Now you can take an oil drum and position it exactly where you need it.  For those who love to comb through every square inch of the levels there are three adapters that will power up certain aspects of the cane provided you manage to find Gyro in three of the levels.

While cash was simply another form of score in the first game it plays a much bigger role here.  Prior to choosing a level Scrooge has the option to buy a number of helpful items.  Additional continues, extra lives, cake that functions like an energy tank from Mega Man, and a rotating fifth item can all be purchased between levels, giving you further incentive to try and earn as much money as possible.  The one controversial item on the list is the safe.  If you die during a level all of the cash you’ve accrued is gone and the jewels you’ve picked up don’t respawn.  To avoid this you can either buy the safe or be a ninja and never die.  The safe has to be bought every level to work and to their credit it’s relatively cheap but it’s a bonehead addition either way.

Thanks to all of the new abilities Scrooge has picked up the levels are larger in scope with multiple routes to the end.  If you thought the original was packed with secrets the sequel dwarfs it in number.  Aside from Gizmo there are additional treasures to be found for a massive boost in cash flow.  There are a number of puzzle elements present with suitable rewards for solving them.  Granted they’re not brain teasers but they break up the monotony adequately.  You have the option of revisiting any previously cleared level for additional cash rewards so there’s no rush to see and do everything on the first try.

It would have been a tall order for Capcom to really improve the graphics over the first game considering they nailed the look of the show on their first try.  Any improvements in presentation come from the art direction.  Rather than a series of platforming tropes you’ll be visiting a number of real world locations such as Niagara Falls and the Bermuda Triangle.  The locales have plenty of background animation creating a much richer look.  The bosses are far more interesting not just in design but patterns of attack leading to more memorable encounters.   The one area the game takes a hit in is the soundtrack.  Not that the music is bad it simply isn’t memorable.  Considering the lasting legacy left by DuckTale’s soundtrack it’s definitely a black mark on an otherwise superior title gameplay wise.

It doesn’t surpass the original in terms of impact but DuckTales 2 is one of the better Disney games available for the NES and a worthy follow-up to its now legendary predecessor.  Sadly due to a small print run DuckTales 2 is hard to find and hasn’t been rereleased anywhere else.  If you are lucky enough to stumble across a copy you’re in a for an entertaining few hours.