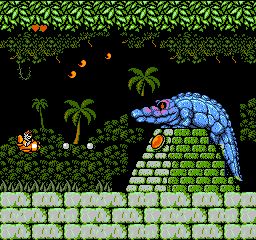 The kids of today really missed out on the golden era of Disney cartoons.  Back in the late 80s and early 90s every self-respecting kid hauled ass to get home in time to watch the Disney afternoon block of shows.  For a solid 2 hours you could catch Duck Tales, Rescue Rangers, Darkwing Duck, and the subject of this review, TaleSpin.  While the series mentioned prior all enjoyed solid if not spectacular games from Capcom TaleSpin was not so fortunate, and is one of the unfortunate runts of the litter.  They can’t all be winners, as they say.

TaleSpin is a loose adaptation of the Jungle Book and casts many of that story’s characters in a new light around the 1930s (numerous references are made to “the Great War”, meaning World War I).  Baloo the Bear is a pilot for the cargo shipping company Higher for Hire.  Along with his sidekick/navigator Kit Cloudkicker the pair will deliver whatever freight you want, for a price of course.  Other Jungle Book alumni include Louie the Orangutan and Shere Khan.  The title of the show is a very clever play on words considering the nature of the show and its characters but it was extremely well done and won many awards during its run.

Due to its premise it’s only natural that the TaleSpin video game would be a shmup.  Capcom wisely went that route, unlike the Genesis and TG-16 games.  However whether it was an attempt at including an original spin on the shooter genre or trying to follow some of the tenets of the show TaleSpin fails as a game and is frustrating to muddle through.  Even as a huge fan of the show I can’t recommend this game to anyone as it requires too much of a time investment to claw its way to average status.

As a horizontal shooter TaleSpin differs from most games in the genre.  You have a life bar for one and collisions with all objects except enemies will cause no damage.  This is to take advantage of the unique ability to flip the ship upside down and fly backwards.  Aside from making it easier to collect power-ups its perfect for saving your life in a last second pinch.  The money collected during each level and upon completion of a stage can be used to buy ship upgrades and other items such as extra lives and continues.  It’s the emphasis on earning as much money as possible to outfit your ship that ultimately ruins the game in my opinion.

In the show the Sea Duck was known for eschewing any weapons in favor of relying on Baloo’s piloting skills to get out of trouble.  That manifests itself in the form of initially only being to fire one shot at a time.  Whether it was a concession to mimic the cartoon or not doesn’t matter as it simply doesn’t work in a shooter.   The upgrades to eventually fire 3 and ultimately unlimited shots are exorbitantly expensive; unless you collect everything and completely ignore all other upgrades the earliest you can buy these are level 3 or 4.  It completely throws off the game’s balance in the process.  Not that TaleSpin is as hectic as your average shmup but the fact that you have to go out of your way to avoid combat just to survive is ridiculous.  These should have been included from the start at the very least.  The simple fact that you’ll have to play through half of the game just to approach a sense of normalcy is embarrassing.

The retro inspired look of the cartoon is completely gone, replaced by dull and lifeless backgrounds instead.  The art deco style that was employed in the cartoon helped to distinguish it from its peers and really brought the 1930s aesthetic to life.  Capcom missed a major opportunity to further separate TaleSpin from the rest of its Disney titles and the game suffers as a result.

At this point there is no reason to go back and revisit TaleSpin.  It’s a shame that such a wonderful cartoon was granted an uninspired cash in instead of the great shooter it deserved.  Fans of the series are better off watching the show instead.