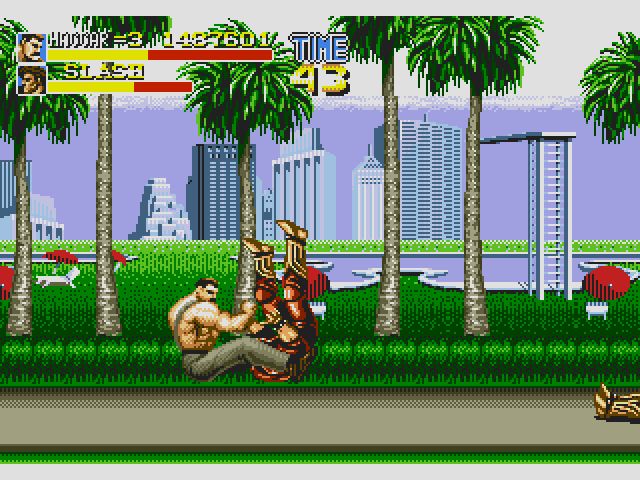 After the disappointment of Final Fight’s SNES release it seemed as though gamers would have to stick to pumping an arcade unit with quarters if they wanted an unfettered experience.  The SNES version was a highly anticipated release and even in spite of its flaws most of us were able to overlook it because the alternative was to spend your allowance in the arcade.   That persisted until Sega released one of the best home ports of the time for the Sega CD.

Mayor Mike Haggar has barely been in office and already has to deal with a catastrophe. The Mad Gear gang who has plagued Metro City wants to do as they please with no retaliation, an arrangement the previous mayor agreed to.  Haggar won’t budge however the Mad Gear have kidnapped his daughter Jessica as a bargaining chip.  Now along with her boyfriend Cody and his best friend Guy Haggar plans to rescue Jessica and clean up the streets.

Capcom failed with the first version released close to the SNES launch but had an opportunity to fix their mistakes with Final Fight Guy.  Instead they simply replaced Cody and only released the game as a Blockbuster exclusive.  This Sega produced edition was the best port available, restoring all of the missing content and offering a few exclusives of its own.

Right off the bat you can select any of the three protagonists and have the option of 2-player coop.  That right there is cause for celebration.  Honestly I can’t fathom how Capcom thought it was alright to release the game without a 2-player option; half the fun of the arcade game was tackling the mean streets of Metro City with a buddy.  Now that all 3 characters are available in one game gamers of all stripes could pick their preferred play style; the slow but powerful blows of Haggar, the fast but light attack of Guy, or the middle man Cody.

Final Fight set the mold by which nearly every beat em up that followed would be judged.  Having said that the game is a bit simpler than most gamers remember; after all it was released in 1989 originally.  The limited move sets of each character are just interesting enough to keep you entertained all the way through to the end of the game.  Keen eyed gamers will notice that both Cody and Guy’s attack speed has been reduced.   The near infinite stream of punches they could produce prevented an enemy from breaking your combo and was extremely effective.   This change breaks that but doesn’t ruin the game in the process thankfully.

Gameplay wise everything is near identical the arcade.  Poison and Roxy have been restored although their daisy dukes have been changed to hot pants.  Most importantly the Industrial level cut from the SNES version has been restored.  This fiery factory will more than likely sap most of your lives as you fight thugs among the moving trails of fire, all in preparation for your battle with Rolento at the end.  A new time attack mode has been added which challenges you to defeat enemies within a strict time limit.  If you really love Final Fight that much I suppose it’s a worthwhile addition but aside from the new background art is only a distraction.  More content is always a plus in my book and the inclusion of this level does make the game feel like a more complete package.

Final Fight was hard even in the arcade and that carries over to the home ports.  The arcade machine was notoriously skimpy when it came to lives; you only had two per quarter.  This version at least allows you to tweak a few parameters such as starting lives and how frequently you’ll receive extra lives based on score.  Even with these options working in your favor chances are it will take a few hours to see the end.  There were numerous points in the game that were clearly designed to rob you of your hard earned quarters in the arcade such as the sudden battle against four (4!) Andores.  These have been toned down somewhat but points like these make the two continues disappear real fast.  The pacing toward the end of the game is frankly terrible; the bay area and uptown drag on far too long.  The limited battle system shows its weakness as you fight a seemingly endless parade of the same enemies for almost 15-20 minutes per level.  I suppose Sega should be commended for recreating the arcade experience but I’ll be damned if I didn’t wish they would have condensed it somewhat.

In terms of recreating the arcade game’s graphics Sega has done an admirable job.  The sprites and backgrounds look true to their coin op counterparts.  The color palette is darker which is unavoidable considering the Genesis and by extension Sega CD’s limits.  One area that has seen an upgrade is the sound.  The arranged soundtrack is fantastic and as an added bonus the intro and ending are fully voiced.

Until the recent Final Fight Double Impact for XBLA and PSN and the X68000 version this was the best home port of Final Fight available.  With its added features it’s also one of the best Sega CD games around and still worth playing today.