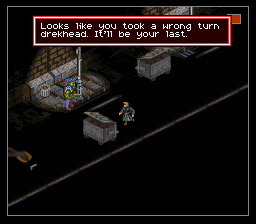 With two Kickstarter funded Shadowrun games in the works all I can say is “What took so long?”  Of all the properties that have sat languishing in licensing hell why Shadowrun?  While we’ve had a near endless procession of terrible Ben 10 and Spongebob games but to date there are only 4 Shadowrun games.  With a universe this rich in history you’d think this would be a shoe in for exploitation (I use it only in the best possible way) but for some reason it never happened.  The SNES and Genesis games were two wildly different takes on the cyberpunk genre, fully immersing you in the world and both worth your gaming dollars.

Jake Armitage should be dead.  Literally.  After waking up in a morgue with no recollection of how he wound up there it isn’t long before he learns that there are some very bad people who went to great lengths to put him there and want to finish the job.  Now he not only has to stay one step ahead of the assassins but piece together his identity and the reason a particular party wants him dead.

This version of Shadowrun has more in common with action role playing games and point and click adventures than the top down open world of its Genesis counterpart.  Played from a ¾ isometric perspective your primary means of interaction with the world comes in the form of a cursor that is used to examine objects, speak to people, and use weapons and magic.

For the most part this cursor based interface works but it does come with some of the usual frustrations that were also rampant in PC games of its ilk.  Small objects can be hard to make out against the backdrops and it’s very easy to miss important story items and wander around clueless.  Combat, while functional, is a bit boring.  You simply bring up the targeting reticle and slowly choose your target.   You’re unable to move and shoot at the same time so almost every battle boils down to a bunch of stationary targets blasting one another. Your aim and defense are determined by how much you’ve built up your skills using karma as well as items so although you are essentially just pointing and shooting it’s at least engaging.

The game’s table top roots are used to enhance its RPG elements.  Killing the myriad hired assassins yields Karma that is used to enhance numerous aspects of your body and skills such as computer hacking and expertise with firearms.   Aside from weapons Cyberware is available for that extra boost.  Upgrades like wired reflexes and dermal plating are near mandatory and unlike the Sega version you won’t have to worry about it affecting your magical skills.  Speaking of magic, collecting the various random items needed to complete spells is a bit obtuse but more than worth the end results.

Fortunately that isn’t the game’s main focus.  This version of Shadowrun is more focused on the detective side of things, lending it a film noir touch.  There is a sea of interesting characters from all walks of life with plenty to say.  Key words are highlighted and learned automatically, enabling you to ask them or someone else for information.  The list of key words will grow pages long in short order but in general you’ll know which ones will yield pertinent info depending on your location and their occupation.

This is a pretty long quest and will take you to all manner of locations in Seattle, from dingy dive bars to concerts to shipping docks and corporate offices.  Since there’s a price on your head it’s not uncommon to come under fire from any point of the screen.  You know the hit men are determined to collect that bounty when they hide out in garbage cans, snipe from the smallest of windows or even in the grass (!).

While the difficulty curve is relatively light there are points in the game where it spikes so it’s a good idea to hire extra help.  Shadowrunners can be hired for a fee to watch your back or if need be you can use their skills to circumvent certain roadblocks. Even with the extra help this can be one tough son of a bitch.  Story wise it all pays off in the end with a satisfying conclusion and a rather unfortunate hint at a sequel which never came.

Although the viewpoint doesn’t necessarily lend itself to exceptional graphics the SNES version of Shadowrun is atmospheric as hell.  This is a surprisingly mature tale and its lack of heavy censorship is amazing considering this was Nintendo at its censoring peak.  Watching Jake get gunned down in the opening moments is heavy stuff.  Aiding in the film noir touch is the fantastic soundtrack.  There are actually very few tracks but the ones in the game are heavy on the bass and electric guitar.  Even better, you can turn off all music aside from the battle theme and it works perfectly fine as well.  I actually did so by accident my first run through and feel the experience might even be stronger that way.

There you have it.  This version of Shadowrun focuses on a different side of the world and comes out a better game for it.  Both 16-bit editions of Shadowrun are absolute must buys in my opinion and will serve as a nice warm up for the (hopefully) two new games set for release this year.