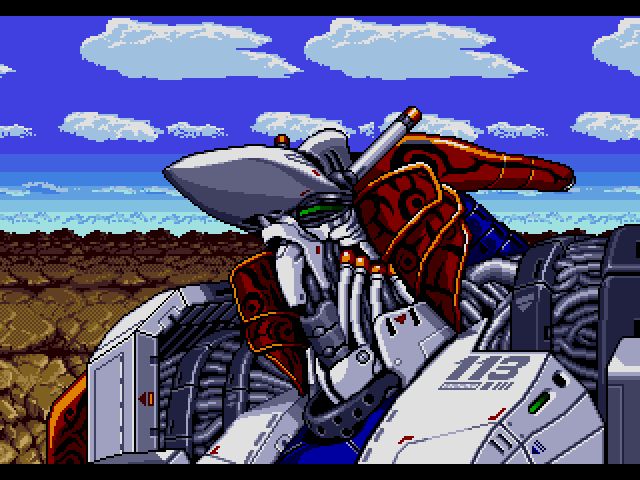 If anyone is familiar with M.U.S.H.A it’s probably because of its ridiculous acronym, which stands for Metallic Uniframe Super Hybrid Armor, just to get that out of the way.  The Aleste series of shooters has a long lineage spanning multiple consoles and computer formats but this Genesis installment is possibly one of its strongest. Developed by the masters at Compile you already have an idea of what to expect in terms of gameplay but even in spite of that M.U.S.H.A will surprise you with its highly detailed world and extensive back story.

In the year 2290 Japan’s advances in technology make many of humanity’s goals such as space travel and advanced robotics possible.  Space colonies are established but one in particular goes out of control.  The supercomputer controlling colony Dire 51 deems humans a threat and sends a massive force of robots to attack.  While Earth is able to send a force of mechs to combat this menace only one survives to face them alone.

Although set in the distant future the aesthetic is decidedly retro.  You’ll see many massive warships designed after ancient Japanese temples as you fly over the many cities of the world.  In fact your mech also follows a similar theme as its projectiles are actually shuriken and its armor resembles a samurai.  Aside from the other games in the Aleste series Imperium is the only other shooter that has the same juxtaposition of medieval design meets technology.

Like most Compile shooters M.U.S.H.A has an elaborate weapon system.  There are only three secondary weapons, a rotating shield, bombs, and a piercing laser.  Each weapon can be powered up three times for devastating results; the bombs in particular evolve from small explosions to miniature black holes.  Your primary fire and secondary weapon have separate buttons which might not seem practical but is helpful in the latter portions of the game when you might need to lay off constantly firing just to see what the hell is happening around you.

The most interesting weapon of all are the shooter staple options (or satellites or drones if you will) you are granted once you’ve picked up at least two pods.  These drones are far more versatile than in most other games since you can set them to one of 5 settings. You can set them up in the front, behind, side to side, rotating or to actively seek out enemies.  The rotating option is an effective shield when used in conjunction with your other weapon.  The seeker option is devastating against bosses as they will aggressively follow the bosses and pelt them relentlessly.

Although the satellites are powerful the main cannon is no slouch either.  By collecting glowing pods the standard single shot is can be quadrupled in power.  This is fairly powerful and a lifesaver as any weapon you possess is lost once you’ve taken a hit.  At the very least once your special weapon is gone you aren’t completely screwed as in most other shooters.

An extravagant weapon system needs a good game to go along with it and M.U.S.H.A does not disappoint.  Enemy waves are a constant presence and they come in all shapes and sizes.  There are frequent mid boss breaks and gigantic armored castles (yes, castles) to contend with.  M.U.S.H.A puts up quite a fight but never descends to the level of unfair; in most cases you’ll you’ve screwed up if you die.  There are frequent weapon drops so even if you die you aren’t powerless for long.

Although its only seven levels long M.U.S.H.A is one of the most intense shooters ever released for the Genesis; so intense in fact that the system is forced to tap out resulting in slowdown and occasional flicker.  How often have you ever even seen flicker on the Genesis?  The later levels move so fast that it’s very easy to get lost in the chaos and hit a stray bullet.  Actually that’s not all that hard seeing as your mech is so god damned big.  I mentioned the importance of separate buttons for your two weapons, trust me it’s a god send as the bombs and laser can obscure your view.  While later games like Lightening Force and Gaiares have it beat in the manic department considering this was released in 1990 makes it all the more impressive.

It certainly doesn’t look like an early effort from that period either.  M.U.S.H.A can easily hold its own against later shooter efforts on the console with its vibrant graphics and unique graphic design.  There’s an extensive use of parallax scrolling and certain levels use it to great effect, stage 3 and 7 in particular.  The mechanical designs of the enemies recall many a great mecha anime and some of the battleships are ridiculous in scale; stage 6 has a war ship that is 10 screens long and nearly occupies the entire level by itself.

This is one of the best shooters from that period which is an amazing feat considering its early release.  These days M.U.S.H.A isn’t very common as its publisher Seismic went under before the end of the 16-bit era. You can find it on the Wii virtual console and at that point price this is virtually a steal.