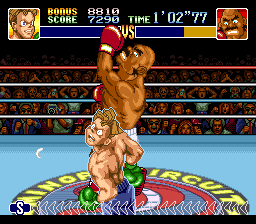 Mike Tyson’s Punch-Out was an international phenomenon and something of a cultural touchstone in America for every child of the 80s.  If you watch any retrospective of that decade chances are Punch-Out! will come up.  Even A-list celebrities have played the game, that’s how popular it was.  The question is how do you follow that up?  In 1994 Nintendo would answer that question with Super Punch-Out, a good game in its own right but one that doesn’t quite recapture the magic of the original.

Little Mac is back to challenge the WVBA once again with a slew of new boxers standing in his way.  Sadly without a Mike Tyson endorsement (we all know why) there isn’t a dream match with Kid Dynamite to look forward to in the end but the game provides plenty of challenges along the way.

The NES Punch-Out! Was loosely based on the arcade game of the same name but featured enough changes that it became its own beast, one that was better than the game that inspired it.  With the SNES’s added muscle Super Punch-Out! is more faithful to the arcade game of the same name and while it is an excellent game overall it loses some of the personality that made the NES game a classic.

For the uninitiated the Punch-Out series is more of a rhythm game than a straight boxing match.  Not in the sense that you’re following button prompts that fly by on the screen; you are watching for cues or “ticks” that are a dead giveaway as to your opponent’s intentions and responding in kind.  Every opponent has specific moves they employ and will telegraph them beforehand; how you respond will determine the victor in the end.

Little Mac’s arsenal of left/right jabs and body blows remains the same as well as the ability to dodge side to side, block, or duck.  The star system of the first game has been ditched in favor of a special meter that builds up as you inflict damage and decreases when hit.  The special meter can be used in multiple ways, for knockout body blows, uppercuts, and rapid fire punches.  One last upgrade comes in the form of the power-up system, noted by the changing portrait color.   It functions like an alternate version of the special meter in that all of your punches increase in speed and power.

The added diversity of attacks is necessary as Super Punch-Out has an almost entirely new cast of fighters, with fan favorites Bald Bull, Sandman, and Super Macho Man the only ones returning.  With 4 circuits and 4 opponents that’s a lot of new patterns to learn.  The series has always been known for the outlandish antics of its fighters and that aspect has been taken over the top in this installment.

Dragon Chan practically cheats by bouncing off the ropes to deliver Liu Kang style flying kicks.  Mad Clown is amazingly agile for an overweight circus act and will backflip to gain enough distance to pelt you with his juggling balls before delivering a knockout blow.  Masked Muscle will literally spit in your face to obscure your vision, the cheating ass.  And I have to mention Hoy Qarlow, a decrepit old man who employs his walking stick in his matches.  Unlike the first game you won’t face anyone twice meaning every fight is a new experience.  Some fighters like Bear Hugger and Piston Hurricane are practically carbon copies of prior fighters, namely King Hippo and Piston Honda so at least in that respect the same tactics will apply.

Its’ a much needed break as Super Punch-Out! can be extremely tough.  The 3 round structure has been removed in favor of a single three minute match.  If time runs out you automatically lose.  I feel Mike Tyson’s Punch-Out! was a lot more balanced in terms of giving you enough chances to stage a comeback because of the multiple rounds.  You could completely botch the first round and then dominate the second since you would have seen everything each opponent had to offer; no dice this time.  With limited continues its rough being sent back to the beginning of each circuit but at least there’s battery backup.

One feature that seems typical of a sports game but really added some incentive to replay each fight was the Time Trial mode.  Competing against the developer’s fastest times is awesome and a great incentive to learn the intricacies of the fighting system.  There are some ridiculous, borderline insane records already in the game that do highlight another feature.  Each fighter is susceptible to a particular combination of hits that when executed correctly will result in an automatic KO.  Seeing Nick Bruiser taken out in under 30 seconds is simply unbelievable and a demonstration of how skilled you can become with practice.

Super Punch-Out ditched the midget Little Mac of the first game for a transparent boxer and a near first person perspective.  Its world’s better than the wire frame model used in the arcade as it allows you to actually see what the hell is in front of you.  The perspective also allows much larger fighters and the increased size allows for a much better set of animations.  The huge cast of characters exhibits a ton of different animations and sport some bizarre designs like Heike Kagero and the Narcisse Prince.

But for all of the strides in presentation Super Punch-Out has lost the identity that was so crucial to the first game.  Little Mac might have been a squat dork but you were invested in his progress as he faced insurmountable odds.  Seeing his training sequences and the newspaper articles as you rose through the ranks added a sense of personal investment since you were responsible for his progress.  And who could forget the between round chatter?  Even though Doc was a blatant Nintendo shill he was at least there to try and encourage you if your face resembled a slab of meat and Bald Bull threatened to send you home in a body bag.  The generic blonde guy you now control is just that: some dude.  You never learn anything about him or care about why he wants to be the champion.  The Mike Tyson endorsement was a genius move along with his involvement in the game’s marketing.  At the time Iron Mike was the biggest boxer in the world and his presence brought a lot of interest to the game.  It’s just too bad there wasn’t anyone on the same level at the time of this game’s release to add some character to its campaign.

Setting that aside Super Punch-Out! is still an excellent game but I would recommend Mike Tyson’s Punch-Out first .  For those that are tired of losing to Mike Tyson in under 20 seconds Super Punch-Out is an superb continuation of that gameplay style.