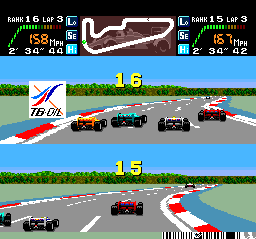 Have you ever played a Carpg?  I just made up that term but it adequately describes Final Lap Twin.  Long before Square Enix shit the bed with Racing Lagoon, a game we were mercifully spared, Namco graced the Turbo Grafx-16 with Final Lap Twin and its exclusive quest mode in a rare third party release for the system.  Originally an arcade game FLT was a solid game that became even better with this oddly well designed addition, making it a pretty hefty package overall.

The Grand Prix mode is a single or multiplayer rally in courses around the world.  The Twin in the game’s title refers to the split screen view; the game is always displayed this way showing either the second player or your computer rival.  You have a choice between 2 classes of cars: F3000 and F1 with 4 cars in each.  The only differences between the two are that they consist of 8 and 16 courses respectively.  The options in this mode are limited to manual and automatic transmission; keeping the focus squarely on your ability to handle the vehicle you’re given rather than your capacity to tweak a car.

The tracks in GP mode are noticeably more advanced in their design and combined with the plethora of AI driven opponents make each race a more drawn out affair.  The computer can be surprisingly aggressive in pushing you off track and since you are awarded points based on position at the end of the race it doesn’t hurt to push back.

In most cases who will come in first or second place will be a battle between you and your rival, not because he’s that good but due to heavy rubber banding.  I’ve made my disdain for rubber band AI well known so I won’t go off on a tangent; I’ll just say that it’s at least tolerable here.  By the end of each GP mistakes become far more detrimental, forcing you to run perfect laps to hope to come in first.  Overall the GP mode is as solid as they come for the period.

It’s the game’s quest mode however that gained it some measure of popularity.  As a young boy the time has come set out on your racing journey and live up to your father’s lofty world championship reputation.  I don’t know who came up with the idea of a car RPG but it works very well and will occupy a good 6-7 hours of your time to complete.

The easiest way to boil down Quest mode would be a 1980s version of Pokemon.  Think of your starting car as Pikachu and everyone else in the world as rival Pokemon trainers.  The objective of the game is to build up your car enough to challenge each of the 6 champions (gym leaders) from each region to collect the secret parts necessary to put you on equal footing with the world champion and have a chance in hell of actually winning.

A lot of thought went into the individual parts of the game.  Backed by your overly generous dad (seriously this guy is daddy war bucks) you’ll spend all of your earnings tweaking the parameters of your car for better performance.  You can modify 5 aspects of your vehicle, the tires for grip, motor for speed, wings for more air off ramps, fuel for longer nitro, and lastly the body.  The body serves a different function here, allowing you to refuse challenges from “weaker” opponents and travel in peace.  Changing parts has a tangible and almost immediate impact on your car’s performance, one that you’ll have to keep in mind as you travel to the different regions of the world.

Random “battles” are handled as short one lap races around varying tracks, always against a single opponent.  The early stages of the game keep the courses very simple in order to learn the layout, see the effects of any part upgrade, and learn the opponent’s driving style.  While it might seem like it would become tedious to compete in 30-45 second races every minute or so the fact that you actually have to drive keeps you engaged in every one.  You can never assume just because your car is relatively tricked out that you’ll always win; throwing off the balance between speed and grip (hint your grip should always be higher) will leave you slamming into billboards left and right.  That type of driving might not hurt you too bad in the generic common battles but won’t cut it in the championship races.

I’m wondering why they call her Sloppy Sue.

There’s a steady progression in terms of the challenge proposed by each region’s cannon fodder.  In the early parts of the game you’re competing against guys with worse cars than yours.  The few who do outperform you usually screw up in some area, such as Uncle Dave and his shitty tires.  By the latter regions guys like Lucky Luke are just as well equipped as you and drive even better.  Granted the only penalty if you can call it that is that you get sent home but that isn’t a factor once you have the Warp Box.  The 6 world champions present a real test of skill since these races also have drone cars that get in the way.  You can somewhat cheese your way through each one by buying parts from the next town over but you’ll have to actually reach them first.

I honestly didn’t expect to like the Quest Mode as much as I did back in 1990.  This simple but well-designed addition to the game could easily have been half-assed in order to pad out the game’s length but its quality serves to make this an all-around solid product.