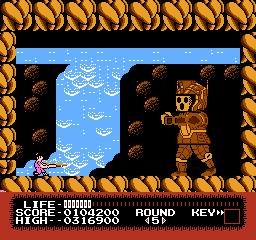 You know, there’s no other way to describe Monster Party then weird.  That should clue you in as to the amount of strange shit going on in the game considering the thousands of games released since.  As a loose homage to the classic movie monster films of yesteryear Monster Party certainly lives up to its title.  But for all of its strangeness the question is does it have the gameplay to back up its strange premise?

Mark is on his way home from a baseball game when he witnesses a demon fall from the sky.  Rather than run like any red blooded human being he instead strikes up a conversation with the demon named Bert.  Bert asks for his assistance ridding the Demon World of the evil monsters that have taken over.  Armed with nothing but his baseball bat Mark accepts.  I’ll use this as an opportunity to point out that not only can Bert fly because he’s a fricking dragon but he can also shoot lasers.  Why in god’s name does he need some mook from Earth?  I digress.

That premise is just as nutty as the Mario Brothers getting sucked through a pipe to the Mushroom Kingdom.  In fact Monster Party seems as though it were created by people who took the idea of Mario eating shrooms a little too seriously.  From its trippy visuals to the far too talkative bosses Monster Party ranks high on the weird meter.  The game has gained something of a cult following over the years due to its strange subject matter and everyone wondering how it got past Nintendo of America largely unscathed.

As Mark your baseball bat is your life line.  Aside from home run swings you can also use it to knock projectiles back to their source.  It doesn’t matter the size, be it bubbles, rocks, massive javelins, if it flies in your direction it can be sent back.  You’ll need to master the timing of your swings because the bat is the only weapon available aside from switching places with Bert, which is accomplished by consuming pills dropped by enemies.

That’s right; you pop pills to change into a dragon.  As Bert you can fly and shoot long distance lasers.  At first Bert’s attack is weak but as the game progresses it grows in strength.  The convenience of attacking from range would outweigh its lack of power either way in my book.  The change is temporary but generally lasts long enough to down at least one boss.

If first impressions are everything than Monster Party is not afraid to let its freak flag fly.  The first level alone assaults you with all of the craziness the game can muster.  The strange leg enemies sticking out of the ground are a taste as you confront your first boss, a talking killer plant who is a bit too happy to see you.  “Hello!” Baby!”  Yeah.

The nondescript backdrop lulls you into a false sense of security with its cheery music and smiling faces.  You might even think the Dark World isn’t so bad.  The game makes an abrupt change once you reach the Cactus/Haniwha statue.  It’s like a switch is flipped and shit gets real as the background completely changes.  All of the happy face blocks morph into skulls dripping blood, the enemies devolve into walking eyeballs and other such freakishness and the music becomes sinister.  Now you know why Bert needs your help.

It’s too bad the rest of the game didn’t maintain this same tone.  The following levels span a number of platform tropes such as the sewers, the lake, and the mountains.  There are a few standouts such as the Haunted Mansion but for the most part it becomes routine.  The object of every level is to beat the numerous bosses to receive the key that will open the exit.  While the normal enemies are nothing more than fodder to refill your life bar the bosses are what has propelled Monster Party to cult fame.

Yes the nutty bosses.  Every level has at least 1 and some as many as 3 or 4.  If you’ve ever seen a screenshot of Monster Party more than likely it’s of a boss.  These odd bastards are all pretty chatty and some make no sense.  How about the dead spider and the fly hanging around its corpse who apologizes because he’s dead?  Or maybe you fancy a 3-way seafood battle royal?  Their dialogue is equally insane.  The samurai ghost informs you that “I….am a slowpoke”.  And the dancing zombies want you to do just that, watch them dance.  It’s not even a case of bad localization as the game was never released in Japan.  I’m just wondering why they like to call you baby.

For all of its strangeness Monster Party is a solid game.  For the most part the game isn’t overly hard although Mark’s short attack range is frustrating to deal with.  When you’re dealing with enemies who fire projectiles its fine but many of the bosses require you to attack in melee range and the hit detection is spotty.  The balance of power between Mark and Bert shifts considerably in Bert’s favor in the second half of the game, which makes sense in that he is a power-up of sorts.   To be fair most enemies patrol a specific stretch of land so in most cases you can stop just short and still hit them but it always feels a little too close for comfort.  I feel if the developers had increased Mark’s attack strength or range by a hair the mechanics would have felt more….”solid” I guess is the word I’m looking for.

For such an obscure release Monster Party is oddly popular.  The chances of the game seeing a re-release are nil; I doubt Bandai even remembers it exists.  Copies of the game are dirt cheap so its not exactly hard to find and I would recommend it as a good way to kill an afternoon.