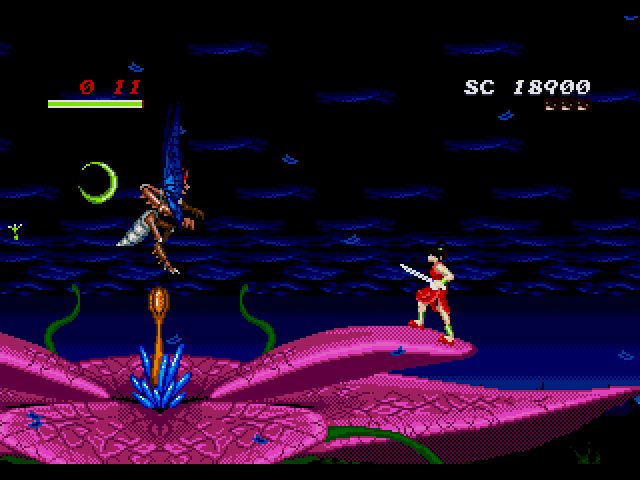 Mamono Hunter Yohko: Makai Kara no Tenkosei (Devil Hunter Yohko: the Seven Balls) is a game that has managed to slip under the radar for quite some time which is surprising considering how loyal the Sega fan base has been over the years. I’m surprised the game was never localized, especially as Sega of America and the game’s publisher NCS were not so discerning in the Genesis’s early years. After playing the game however I can kind of see why. This isn’t necessarily a bad game but we didn’t miss out on a long lost classic either.

Loosely based on the OVA series of the same name Devil Hunter Yohko: the Seven Balls sees the titular heroine as she takes up the sword as the 108th devil hunter in her family line. It’s been decades since I’ve watched the show but I have vague memories of it being a little bit silly as Yohko swooned over boys as much as she fought monsters. However the game plays it dead seriously and considering the game’s ridiculous level of challenge I can see why. I can appreciate a difficult game when done properly but unfortunately this is not one of them. The comparisons to Valis can be made but I found that series to be far more engaging than the frustrating design of this game.

I made the comparison to Valis and to a certain extent it can’t be helped. Yohko only has one weapon, a short range melee sword that if you’re smart you will never rely on. Your primary attack will be the shield erected once you hold the attack button. This shield serves two functions: obviously it will protect you from projectiles but it can also be tossed in any direction. The barrier isn’t infallible; it isn’t strong enough to guard against head on collisions and too many bullets in a row will cause it to weaken and break. It’s an interesting mechanic, having to choose between attack and defense and one that serves the game well.

The primary thrust of the game is platforming and unfortunately this is where it stumbles. Imagine playing Super Mario Brothers with the rigid controls and physics of Castlevania. The thought alone almost made me punch my monitor and that is regrettably what you get here. Yohko isn’t as stiff in her movements and runs at a nice clip but once airborne you are locked into that action. The level design calls for precise timing and placement which you can manage as enemies swarm constantly. The collision is also spotty and so you’ll fall through ledges that you have clearly landed on. The late stages of the game place a heavier emphasis on this which makes it all the more frustrating that it isn’t as tightly designed as it should be.

Devil Hunter Yohko is brutally difficult, not just through its design but because it feels as though you are ill equipped to deal with the amount of crap thrown your way. Using the shield as a projectile is a double edged sword in that it will deal with distant enemies but they attack in packs and the melee sword is pathetic in comparison. For the stronger enemies it is nearly impossible to get away without taking a hit which feels cheap. The lack of any power-ups aside from health beads is dubious considering in the OVA Yohko was equipped with numerous weapons to exorcise demons. Their absence is pretty glaring and makes an already difficult game that much harder.

At just five stages the game is pretty short but you won’t be seeing the end of it any time soon. Despite what may seem like a generous amount of time in most cases you’ll reach the bosses minimal time to spare. It’s not that the levels are a maze or have many nooks and crannies to explore but the fact that it is optimal to move slowly and deal with enemies one at a time. Surprisingly I found the bosses to be pushovers provided you can actually 1. Reach them and 2. Have enough time. But that last stage is a summation of nearly everything wrong with the game and can eat my ass. Seriously.

In a strange way I put Devil Hunter Yohko in the same category as Earnest Evans; a game that had potential but falls flat in the end. This is certainly not as dire a train wreck as that game but playing it to appreciate its finer points will just end in frustration. You are better off with Valis III or Castlevania which are both cheaper and far better in every way.