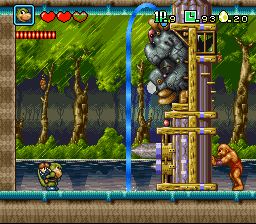 For years I avoided DinoCity, not because I heard that it was a bad game but because I had preconceived ideas about it. The few reviews I read painted it as a shallow platformer for kids and to a certain extent they are right. Looking at the screenshots and that god awful box art I’ll admit I jumped to the same conclusion. But upon renting it I found a competent platformer that is better designed than you would expect. DinoCity isn’t a lost classic but a good game worth your time.

As an interesting bit of trivia DinoCity was loosely based on the long forgotten movie Adventures in Dinosaur City. It’s a strange movie to base a game around, especially for a Japanese developer but for all I know it could have been a huge hit over there. Personally I get it confused with the TV show Dinosaurs but I digress. Timmy and his friend Jamie are accidentally teleported to a world of anthropomorphic dinosaurs by one of their dad’s inventions. Unfortunately the Rockey’s, a group of Neanderthals, steal one of the key components needed to send them back. Two friendly dinos, Rex and Tops offer to assist them and the journey begins.

At its core this is a pretty simple game. You can only jump and punch and there are no secondary weapons or items to collect aside from eggs and hearts. Before you conjure up images of Yoshi’s Island eggs only grant extra lives. One notable distinction is that Jamie and Tops attack with projectiles which make the game easier. Timmy and Jamie ride on the backs of their prehistoric friends who do the heavy lifting. However at any time you can hop off in order to lower walls or clear a path for your larger friend to move onward. Now that I think about this does bear a resemblance to Super Mario World in the way the kids ride the dinosaurs like Yoshi. That’s pretty much where the comparisons end however.

While I’ve mentioned the simple mechanics it should be noted that DinoCity is deceptive with its challenge. This borrows liberally from the Mario series and while it isn’t half as accomplished as Nintendo’s classics it is much better than overhyped trash such as Bubsy. The levels are well designed with deliberate enemy placement and platforming that is very measured. Oftentimes you’ll see a ledge or floating platform and jump for it only to have that enemy you ignored suddenly jump in your face. It isn’t perfect and I found some of the situations to be incredibly cheap but overall I liked it. The game is only let down by the unresponsive controls. There is a slight delay after performing an action before you can do another with this cropping up when attacking enemies. Usually they will eat your first attack but the game won’t register your second button press leading to a cheap hit. It’s frustrating; let’s just leave it at that.

As much as I do like the level design the game’s simplicity does work against it. Your punches and butt bounces work fine but you won’t shake the feeling that there should be more. Taking control of your human companion is a cool feature and really should have been worked into the game a bit more as it would have made this a bit more unique. Also at just six levels there is far too much repetition involved in the latter half of the game.

The presentation is actually pretty great for such a low key release. The game’s environments are packed with detail and very imaginative. The sprite work isn’t as impressive; think Joe & Mac minus the good art. While I do like the graphics the presentation is marred by repetition and some embarrassing slowdown. There only seem to be around 5 or 6 backdrops that are repeated throughout the game with slight variation. Sometimes you’ll cycle through 3 or 4 of these in one level! Anytime the game employs Mode 7 the frame rate drops into the single digits and it does have an impact on gameplay. It is a bit sad that the otherwise solid graphics have these flaws.

What little expectations I had for DinoCity were pleasantly shattered. What I initially dismissed as a game for kids surprisingly has some teeth, not through bad design but smart level design. This is a solid second tier release after you are done with the numerous classic platformers available for the SNES and is far better than some of the mascot tripe that garnered far more attention.